13 Best Things to Do in Minneapolis 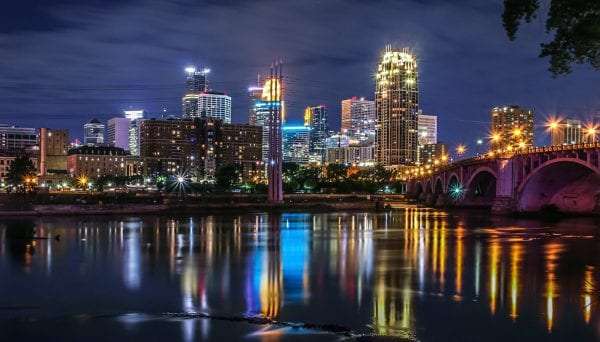 Are you planning a trip to Minneapolis? Here is a list of the top 13 Things to Do in Minneapolis.

The city of Minneapolis, due to the abundance of water in the city that is enriched by the presence of 13 lakes, is home to a vibrant life of biodiversity. The city itself is influenced by the very flow of the Mississipi River and has been built holistically in such a way that the natural flow of the river is not disturbed by urbanization.

This is one of the very few cities in the world where modernization is done along with the flow of nature. The city has a perfect balance of habited settlements and uninhabited settlements that there is a large part of the city that is still in the hands of Mother Nature.

From silent, adventurous camping grounds to stylish, modern, and luxurious shopping malls, there is everything you want to explore in the city itself. The Mississippi River that runs right through the city forms creeks and tributaries that give you the best experience for kayaking or canoeing in the city.

The largest retail shopping mall in America is in Minneapolis. If you are a cycling lover, good news for you, Minneapolis is one of the best cycling-friendly cities in the world. The Minneapolis state government offers bikes on subsidized rents for users; it is called Nice Ride Minneapolis.  The city has over 120 miles(193 km) of on-street trails and 90 miles(144 km) of off-road trails.

Cycling is one of the best things to do in Minneapolis, without fail. Do it!

If you love beer, Minneapolis has some of the best breweries in the city to taste a variety of beers from. Want to sample foods from all over the world, then you have the Midtown Global Market. Grab some good food to eat and sit down comfortably somewhere; you will see a mini fashion walk as this city is a thriving place for fashionable hipsters.

Watching the variety of people walking past you while you are relaxed is also one of the best things to do in Minneapolis.

There are a lot of things to say about Minneapolis and many more things to do in the city that are awesome and exciting. So, in this article, we have put together a list of things that you should not forget to do when you make your visit to Minneapolis in the future. 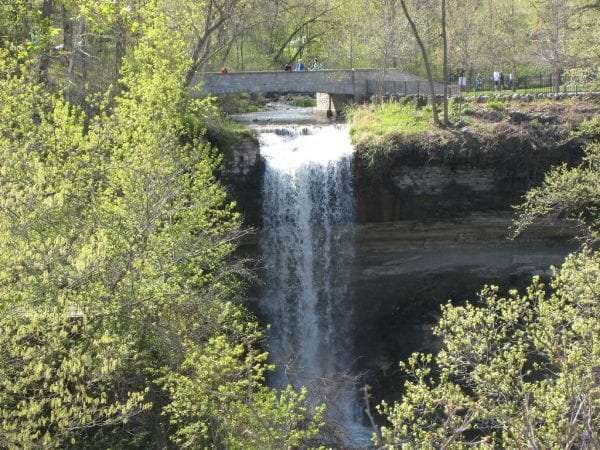 Running for 22 miles or 35 km along with the downtown Minneapolis through several lakes in the city, the Minnehaha creek then finally falls into the Mississipi River from a height of 54 feet, forming the Minnehaha Falls. Situated right in the middle of the Minneapolis City, Minnehaha Regional Park is a deep, untamed and adventurous wildlife area.

From the urban environment of Minneapolis, the environment begins to take a dramatic shift when you enter the Minnehaha Regional Park. The falls completely freezes during the winter season, allowing you to walk behind the frozen water curtain. The park offers various exciting activities for its visitors, to picnic, to play golf and a pool to take bathe in summers.

This must be first in your list of things to do in Minneapolis.

The Institute has seven different sections: Arts of Africa and America, Contemporary Art, Decorative Arts, Textiles and Sculpture, Asian Art, Paints, Photography, New Media and Prints, and Drawings. The Institute plays a vital role in promoting interest in the subject of Arts to the public.

The Minneapolis Institute of Arts will give you an incredible insight into the history of each culture and important civilizations through its extensive collection of artistic specimens of famous artists around the world.

Cheer loudly for your team at Target Stadium! 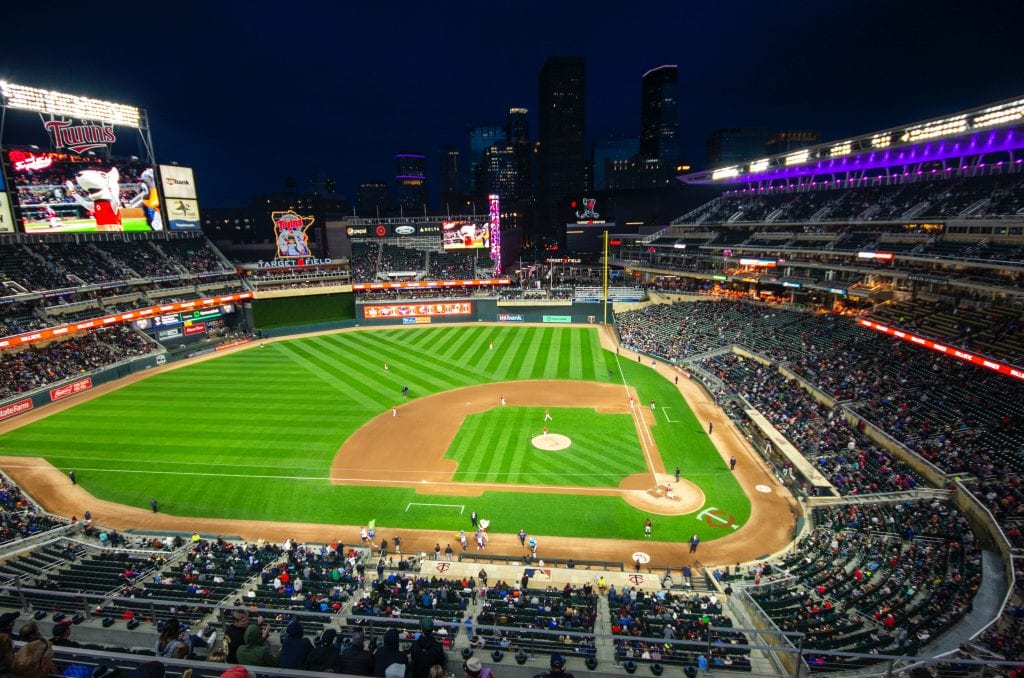 Photo by Klemens Köpfle on Unsplash

Go for Shopping at Mall of America

When you come here, just do your shopping later and take all the time you want to let your kids have fun at the Nickelodeon Universe, a huge theme park inside the shopping complex; then at the Crayola Experience, a crayon themed park and at the SEA Life Aquarium, an indoor aquarium.

Go Chilling Along the Shores Chain of Lakes 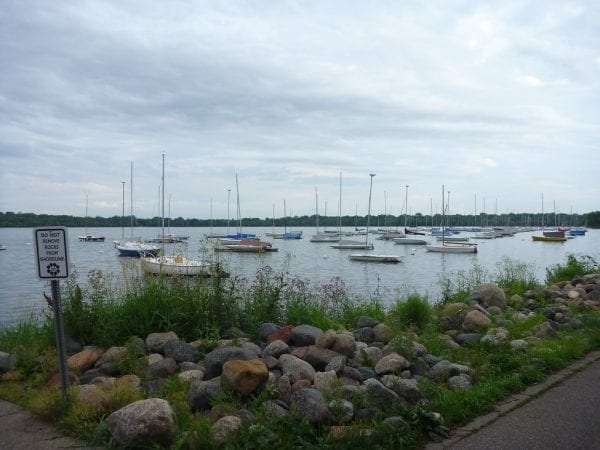 The lake shores that were left uninhabited around Lake Brownie, Cedar Lake, Lake of Isles, Calhoun, and Lake Harriet since the 19th century and were declared as public property. So, these shores formed the Chain of Lakes Regional Park.

The Lake Harriet is good for bird watching, the Lake Calhoun has the best shores, Lake Isles and Cedar is the best for canoeing, and if you want to go for a nice bike ride, there is approximately  16 km long cycling trail that connects the shores of all those lakes.

In summer, the lake shores are perfect for lunch picnics, and in the winter, when the lake freezes, it becomes an ideal ground for skiing and ice skating. The Chain of Lakes is probably the most versatile place during all the seasons of the year, in this list, and it never disappoints.

Chain of Lakes offers you unique experiences to its visitors each time during the year.

Witness the Industrial History of Minneapolis at the Mill City Museum 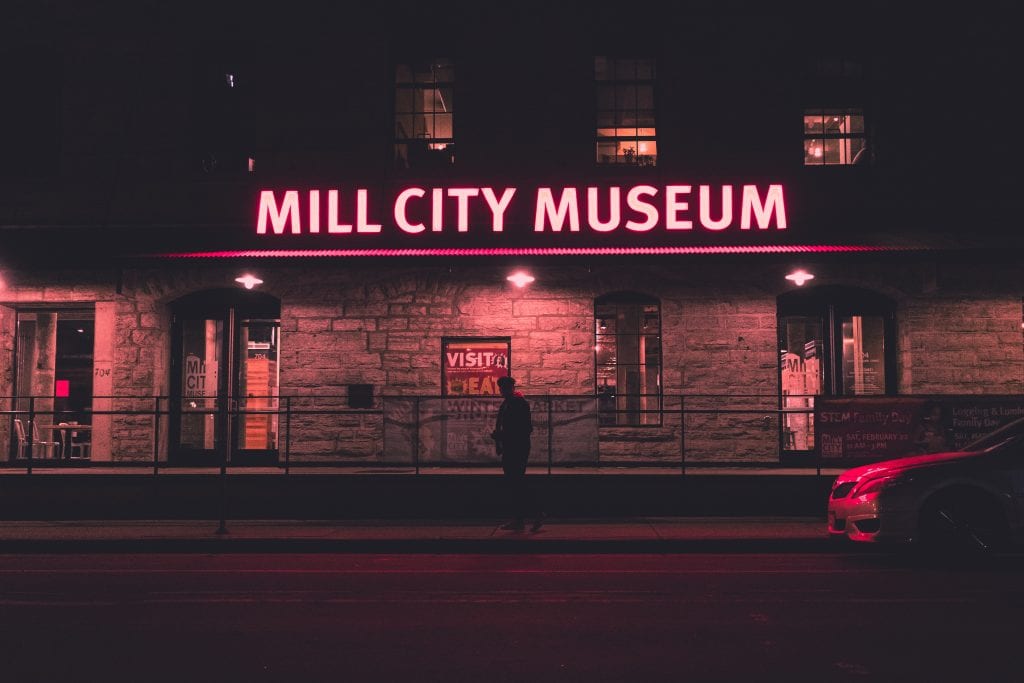 Photo by Joshua Hage on Unsplash

Built upon the ruins of the Washburn A Mill Complex dating back to 1880, this was considered to one of the largest flour mills of the world. The flour mill complex was credited with supplying wheat flour to the whole state. The museum is now filled with photos illustrating how the milling process took place.

There are these Water and Baking labs, filled with engaging activities to help children understand how their daily bread is made, step by step, from milling to baking. The Flour tower takes visitors through the eight floors of the milling complex to look through the lives of mill workers of those days.

At the observation deck of the mill, visitors get to admire the old Minneapolis Industrial river-front from the Stone Bridge to St.Anthony Falls that powered the milling industries with its hydro-electric power.

You know what, The Pillsbury Company was founded in Minneapolis in the year 1869. The Pillsbury Company operated one of the biggest mills on the banks of the Mississipi River with the hydro-electric power from the St. Anthony Falls. Even today, the remains of their old milling complex lie at Mill City.

Get Yourself Immersed at the Plays of Guthrie Theatre 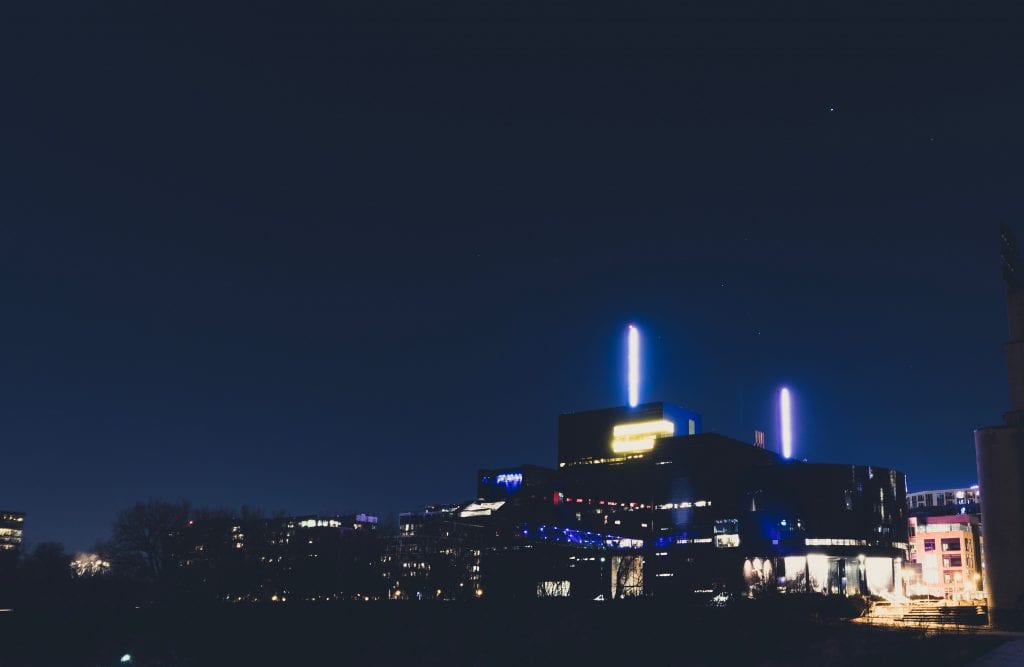 Photo by Joshua Hage on Unsplash

Named after and founded by the famous English theatre director Sir Tyrone Guthrie, The Guthrie Theatre is situated along with the Mississipi River. The theatre was first built in 1963 and was demolished, redesigned, and rebuilt in 2006. The Guthrie Theatre was opened up on May 7, 1963, by three acclaimed theatre directors Sir Tyrone Guthrie, Oliver Rea, and Peter Zeisler.

The new Guthrie Theatre is situated on 285,000 square foot space, which houses three separate theatres 1) 1100 seated Wurtele Thrust stage 2) 700 seated McGuire Proscenium Stage and 3) 199 seated Dowling studio. The Theatre till now has kept its standards of theatre art and has been keeping and has remained true to the Shakespeare drama productions.

The Theatre has three separate fine dining restaurants and a retail store as well. Don’t forget to check out The Endless Bridge at the Guthrie Theatre provides the visitors with a scenic view of the Mississipi River and the Minneapolis City in the evening. Along with these, the theatre offers Summer drama camps for interested people of all ages. 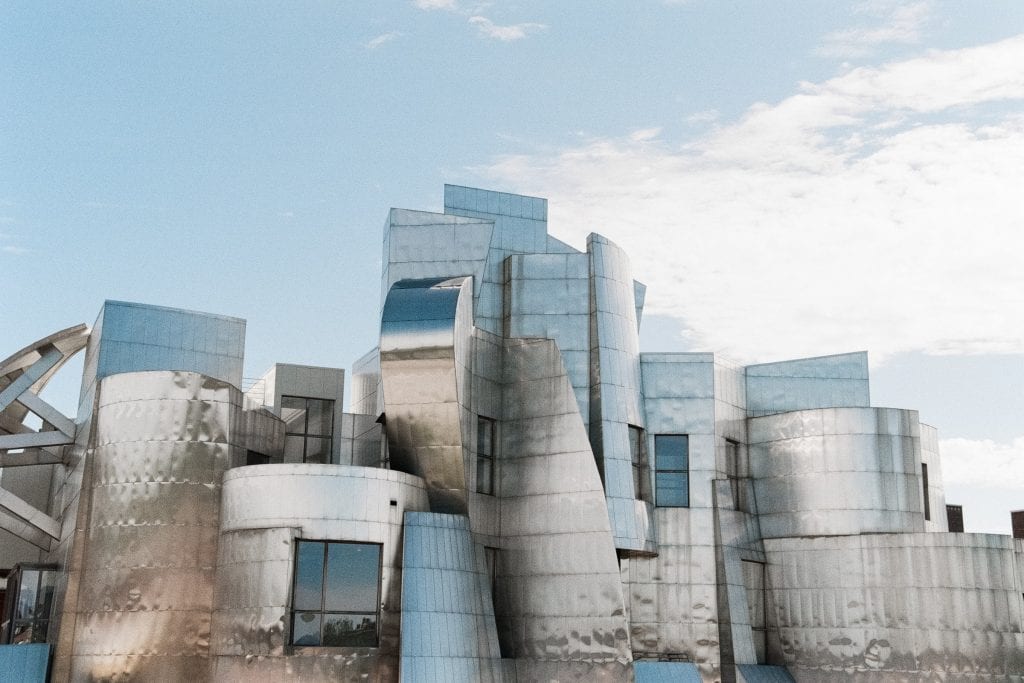 Photo by Weston MacKinnon on Unsplash

Get the Best of Your Cameras to the Minneapolis Sculpture Garden 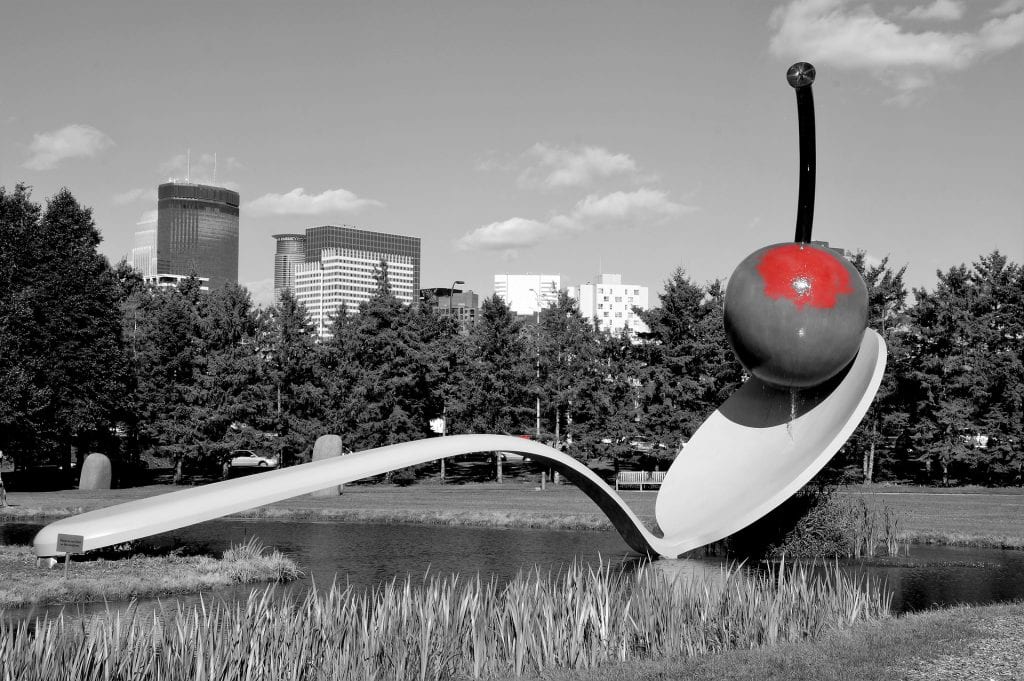 Image by Giselle Whiteaker from Pixabay

The Minneapolis Sculpture Garden is located near the premises of the Walker Art Centre. Owned and managed by the Walker Art Centre, it hosts the giant, artistic, outdoor, and artistic masterpieces that are unique enough that deserve a separate mentioning in this list. So if you are keen on photography, shooting Sculpture Garden is one of the best things to do in Minneapolis.

The famous Spoonbridge and Cherry is one gigantic sculpture where a giant cherry rests on top of a giant spoon tip, which is something you should witness here without fail. This magnificent sculpture was designed by a husband and wife Claes Oldenburg and Coosje Van Bruggen. The garden also has many other unique and intriguing sculptures that you should post those photos on your Instagram. 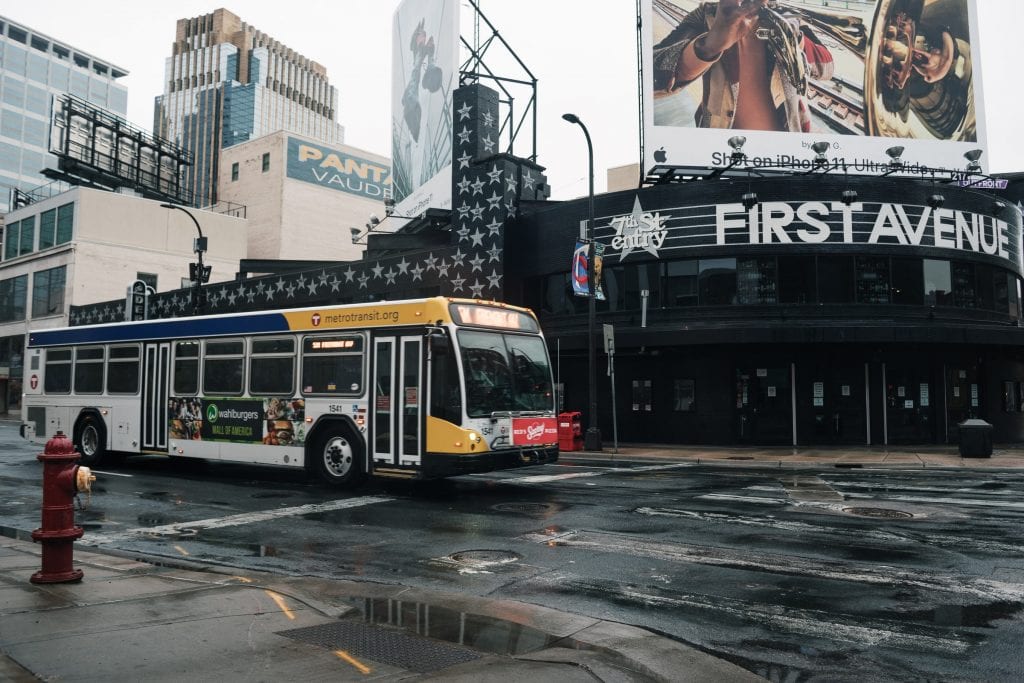 Photo by Weston MacKinnon on Unsplash

The bustling and awesome nightclub was once an old bus depot in the year 1937 and was redesigned as a disco club first in the year 1970. The First avenue nightclub has another attachment of stage named the 7th Street Entry, which was also a part of the former bus depot, this was a restaurant.

A black wall on the 7th Street Entry has several white stars, where the names of the performers who till now performed at the club stage are written. First Avenue is a unique place and a symbol of American Music history.

Prince is the most famous musicians of all to have performed at First Avenue. The nightclub has also been featured in his movie Purple Rain. When you are in Minneapolis, be sure to check out this club as this club has recorded the inspiring performances of hundreds of artists. The First Avenue nightclub has been a place and is still a place for hundreds of artists to realize their dreams. 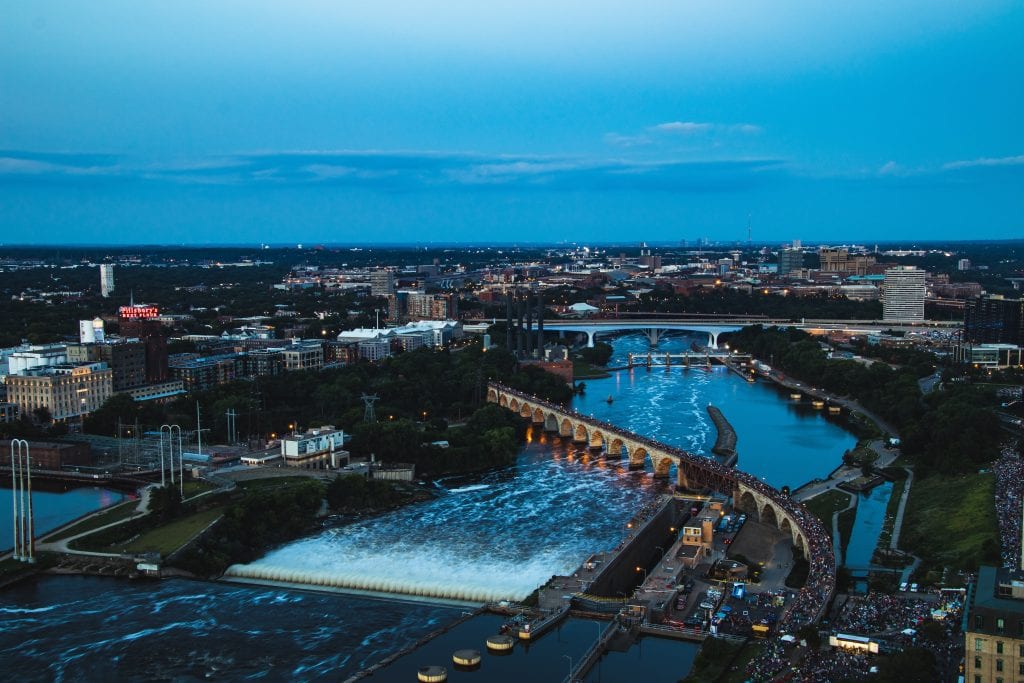 Photo by Andrew Sit on Unsplash

The city of Minneapolis and the state capital city of St.Paul are together called the Twin Cities. Minneapolis and St. Paul are two major cities in the state of Minnesota. While Minneapolis is cultural and economic hub St. Paul is the administrative hub and the second most populous city of the state. The two cities are partially divided by the Mississipi River running between them.

The proximity between these two most significant urban centers is the reason why it is called the Twin Cities. There is also a high contrast in the culture of both the cities, Minneapolis has a Scandinavian and Lutheran culture, and St.Paul has a strong French and Italian influence. And, this contrast in cultures can be seen in the architecture of particular churches and old buildings in the downtown areas in the cities.

Time to End Your Trip with Stone Arch Bridge 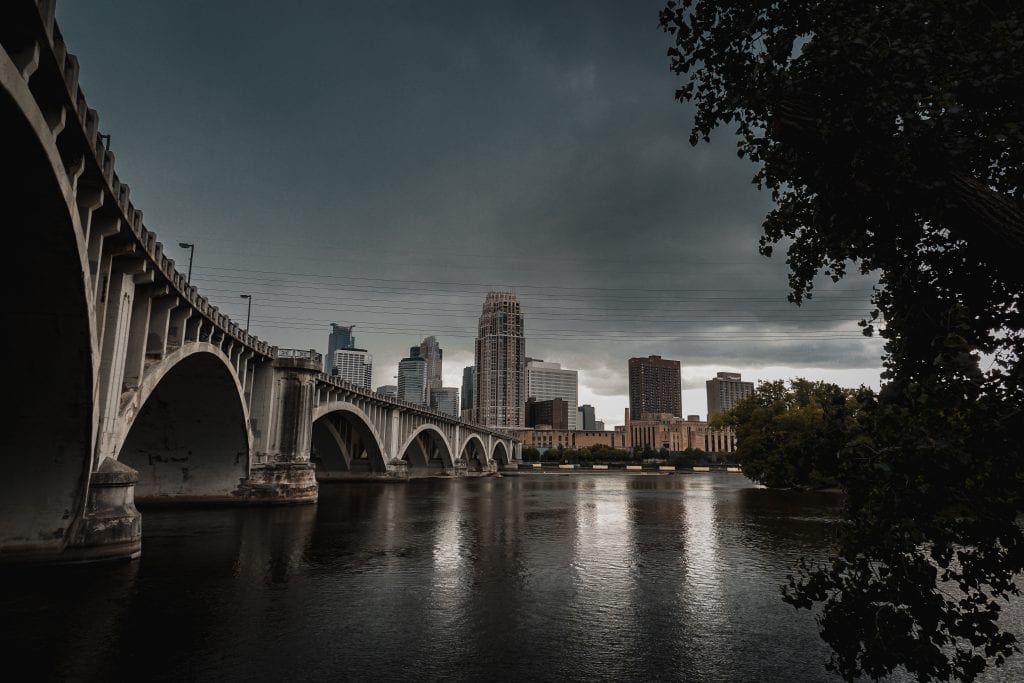 Photo by nostalgia on Unsplash

Okay, now you have come to the end of this list. And, this is the most important of all the things to do in Minneapolis to finish the trip happily and entirely is visiting the Stone Arch Bridge.

When the city was experiencing rapid economic growth in the 19th century, transporting the goods produced on the West side of the river to the market on the east side was a little challenging. There was only one bridge that connected both sides, the Hennepin Suspension bridge, which was becoming obsolete slowly.

So, there was a need for another bridge that would connect both sides of the river; the Stone Bridge was then built up in 1883, serving its purpose effectively as a railway bridge until 1978. In the early 1990s, the bridge was renovated and is now used as a pedestrian and vehicle bridge. This was completely built on stones and was the second bridge to be built on the Mississipi River after Eads Bridge.