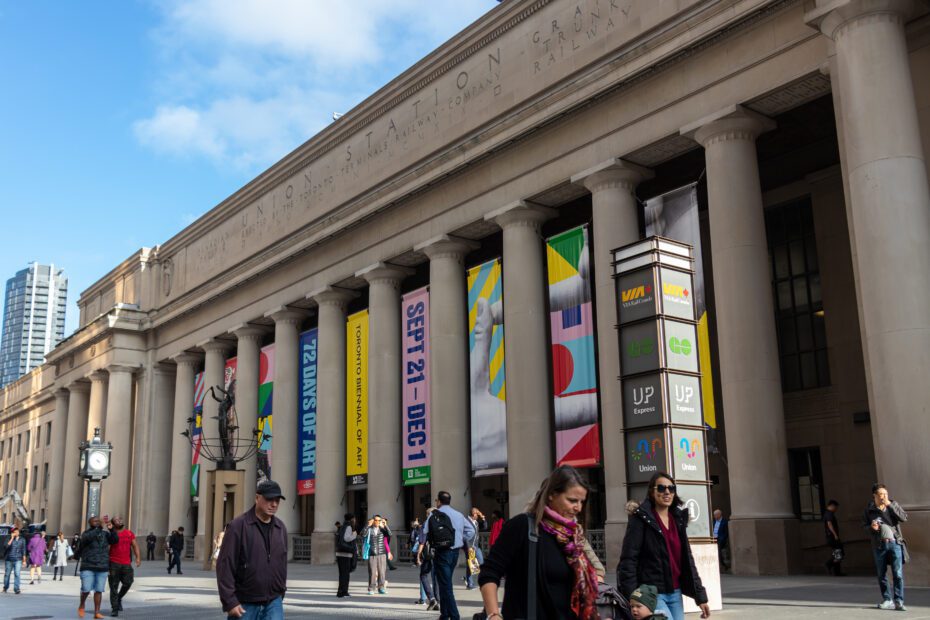 The Union Station Toronto is a famous railway station and intermodal transportation hub in Toronto, Canada. The Union Station Rail Corridor is one of the most significant rail corridors in entire Canada. 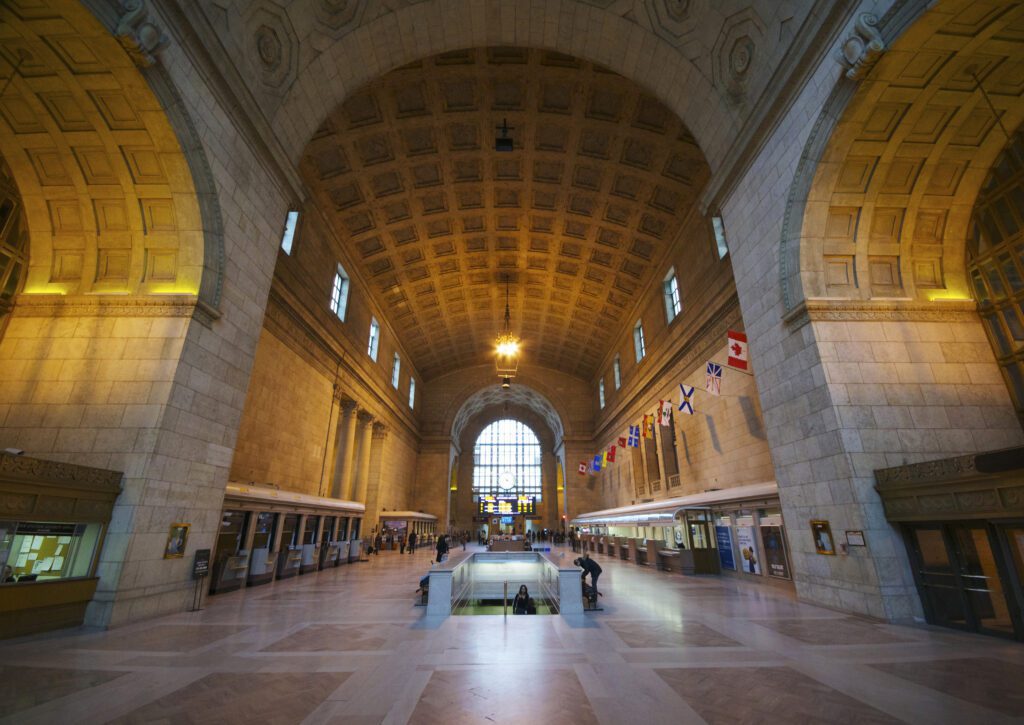 Union Station Toronto was built in the École des Beaux-Arts design in Paris by a group of architects like G.A. Ross, R.H. MacDonald, and John M. Lyle. It was created when railway stations were seen as the gateway to a city. The front of the station is lined by Tuscan Order columns. It was a Roman order of architecture, which was one of the classic forms of architecture.

There are dentils you can find in the upper cornice of the building. The lower cornice has egg and dart. There are designs of wreath along the frieze, which is marked to indicate wealth and prosperity. This is an essential design, mostly used in Greek architecture. The station holds a royal look with the polish used in various parts. One of the doors of the station has a coffered vault with a cartouche keystone. Around the glass doors, there are doors and moldings surrounded by windows that are polished with brass.

The shape of the ceiling is marked in the four-story, barrel-vaulted windows on the east and the west walls. In the middle of the south and the north walls, the names of the cities that were then serviced by the CPR and the Canadian National Railways were carved. The names were in the order of the cities from the east to the west. The interior walls are made of Zumbro stone from Missouri, floors of Tennessee marbles, and the exterior walls of Indiana and Queenston limestone.

The location of Union Station Toronto is at a significant point where you have access to many of the essential sites of the city. It is located between Bay and York Streets, where the entertainment location of the town begins. It is close to the Ontario Lake, which is the border on the southern side of the city. On the south part of the station is the Gardiner Expressway, which gives easy access to transit buses.

The main entrance of Union Station Toronto faces north towards downtown Toronto. For tourists coming after a long journey, there is The Fairmont Royal York Hotel, accessed from the station via street and underground. Also, The Dominion Public Building, which serves as the building for various government offices, is located to the east of the station.

The significant buildings near the station are Telus Tower and Brookfield Place. Brookfield houses the Allen Lambert Galleria and the Hockey Hall of Fame with the Stanley cup. The other buildings close by the Union Station Toronto are Scotiabank Arena, Rogers Centre, Metro Toronto Convention Centre, and the CN Tower. All these buildings can be accessed from the station through the Skywalk. Also, the land around CN Tower is converted to a public park so that people could also take a leisure break from the journey. 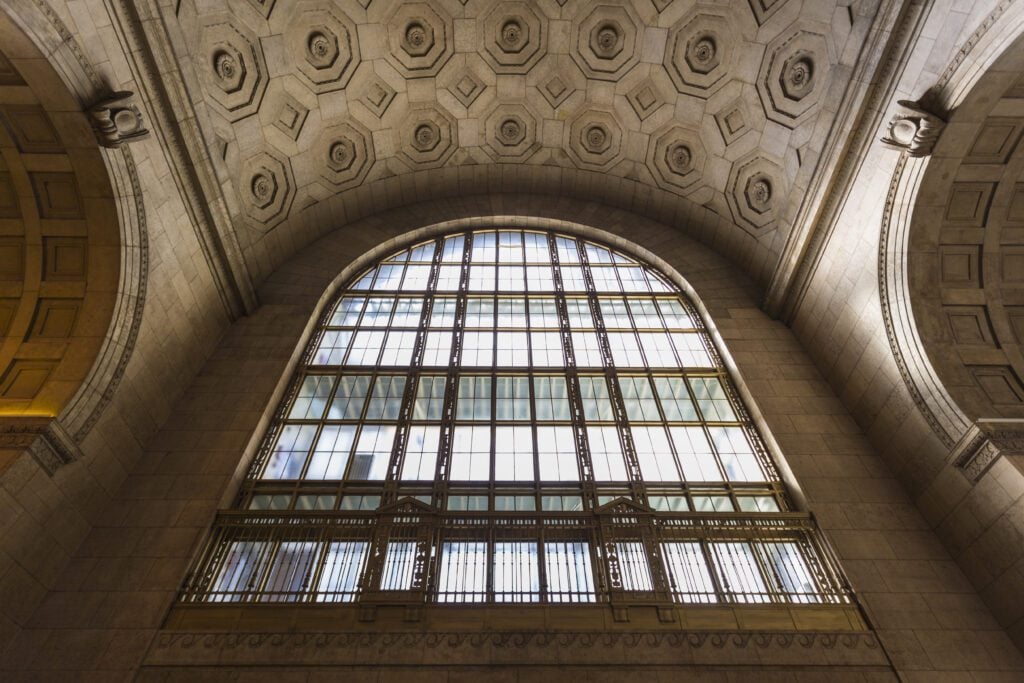 The front entranceway of the station opens into the ticket lobby, which is also called The Great Hall. This section has the grandeur of a castle with a mix of bronze, limestone, marble, tiles, and translucent glass, adding to its look in quality. The entire space is blessed with natural light coming from the refraction created by the clerestory windows. They also have tall windows like those in the Roman baths.

The ceiling is made of coffered Guastavino tiles. The roof gives the people a feeling that another building is rising from behind. Information counters, baggage, and via rail’s ticket ate lined on the space against the north wall. On the opposite side, there are restaurants and other shops. The center space is taken by the enormous clock and the departure board. The stairways on either side lead to the floor above and the transit areas.

There are national as well as international services from Union Station Toronto. It is the busiest and most used station. This is also because of the location of the station. It is in the center of the most important city of Canada, and the corridor of the town. People always come and go through this station.

The trains from Toronto connect many significant cities like Southwestern Ontario, including Kitchener, London, Sarnia, and Windsor. Also, trains from Montreal pass through Toronto. Toronto trains from north and east travel the Ottawa-Montreal-Toronto triangle so that they can take a different route from Montreal. Also, the station is the eastern terminal of The Canadian, a transcontinental passenger train operated by rail Canada that services between Union Station in Toronto, Ontario, and Pacific Central Station in Vancouver, British Columbia.

The international service from Union Station Toronto is from Toronto to New York City. The other prominent United States destinations include Buffalo, Rochester, Syracuse, and Albany. Until 2004, Amtrak and Via Rail operated the International Limited from Toronto to Chicago via the Sarnia–Port Huron border crossing. Now both of them maintain service in the route on their sides of the border but do not cross them.

The employees were known as “Red Caps” because of the uniformed headwear they wore. After the Great Depression and the affordability for plane travel increased, the passenger trains had only less number of travelers. And by 1973, there were only 24 Red Caps in the Union Station Toronto, who were appointed as employees in the Via Rail by the 1980s.

As different from the practices of the time, most of the Red Caps appointed were Black men from across Canada, the Caribbean, The United States, and were even from as far as Wales and the Dutch East Indies. Surprisingly, all these men were quite educated! Many of them had degrees in science, medicine, and business administration. Being Black, they had difficulty finding jobs in their respective field of excellence. The only position that allowed the Black Canadians to work with the middle class was Red Caps.

The making of the third union station had a significant change in the Canadian railway industry. The construction eliminated the Lorne Street located between Simcoe and Bay from Front to Esplanade. The new station’s head house and the east and west wing offices were completed by 1920 but were not opened for the public for 7 years. And in 1927, even though the station was incomplete, it was inaugurated by the Prince of Wales.

From the 1970s, many films and TV movies were set in Union station Toronto. When in 1976, the action-comedy Silver Streak brought a train engine car bore through the Union Station, in 2000, Suicide Squad staged a whole battle between Harley Quinn and the supernatural Enchantress. Eventually, many movies were shot in the station, and they made sure to make the station more intact.

Also, weddings and other special events are set in the union station. Permission is required for professional photography in Union Station. This includes photography for commercial, public as well as private events. If the shooting is for commercial purposes, there will be extra licensing and fee requirements. Also, the application should be given two weeks before the booking.

There are many more interesting facts about Union Station Toronto. If you know them, let us know in the comments.