Sure, you’ve probably heard the term “lunar new year” before, but what does it mean? Where does it come from? Who celebrates it? When is it celebrated? Fear not, for your questions will be answered in the paragraphs below.

The Chinese Calendar is a lunisolar calendar that has been used since the 14th century BCE. A lunisolar schedule is a rather complicated one, whose primary purpose is to convey the phase of the moon and the period of the solar year simultaneously. They are lunar calendars, but with modifications and additions to keep them in place with the seasons.

The Lunar New Year marks the completion of a year in the lunar or lunisolar CalendarCalendar. It is traditionally celebrated in Asian countries like China, Vietnam, Japan, Korea, and the likes. Each state has its spin on the Lunar New Year, but history indicates that the Chinese were the first people to come up with the concept.

It is celebrated in Spring, with the dates usually falling sometime in January or February. Due to this, it is also locally known as Spring Festival, and the lunar new year starts at the end of winter and the arrival of Spring. This is important because agriculture was the focus of life back in the olden days, so when this holiday was created, it was a way to signal the advent of new crops and harvest of the winter crops.

The Chinese call the Lunar New Year Chunjie, The Vietnamese refer to it as Tết Nguyên Đán or simply, Tet, in Korea it is Solnal, while in Tibet it is known as Losar. We’ll be looking deeply into how the different Asian countries go about celebrating their version of the lunar new year.

The thing that is common to all of them is that it is an opportunity for people to go home, have family reunions, and to catch up with friends, new and old. They all consider sweeping to be bad luck as you’re supposedly “sweeping your luck away”. And lastly, the days before the Lunar New Year involve cleaning homes, decoration, shopping for New Year’s products like clothes and house decorations, and excessive importance on avoiding bad omens no matter what.

Chunjie is a 15-day long festival celebrated by the Chinese and is the most important festival in their CalendarCalendar. It is their version of the lunar new year and is also known as Spring Festival due to it being celebrated in the spring season. It’s dated on the Gregorian Calendar for the lunar new year, usually fall around the end of January to the end of February.

There is an old myth associated with the Chinese Lunar New Year, that being the one of the monsters Nian (“Year”). It is said that Nian would attack the villagers and dine on human flesh at the start of each year. Every villain conveniently has some weaknesses, and Nian was no different. It feared fire, loud noises, and most prominently, anything that was red.

So the villagers, in an attempt to protect themselves, attached red paper to each of their houses, had fires and lanterns burn throughout the night, and burst firecrackers and banged on drums to create noises that frightened the monster too much to eat humans anymore.

The Spring Festival is hence a celebration of the legend as well. And it is celebrated by a decent percentage of the world’s population, as China is one of the world’s most populated countries.

Here are some of the things that you would see during Chunjie in China: 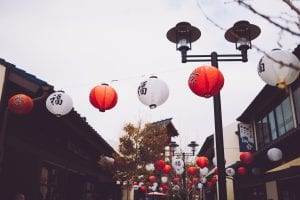 These are just a few things that happen in China during the Lunar New Year. It is a pleasing time for the locals and Chinese people across the globe in general.

Tết Nguyên Đán, or simply Tet, is the version of the lunar new year that is celebrated in Vietnam. It means “The first morning of the new period”. The Vietnamese CalendarCalendar is based on the Chinese Calendar itself, but with a few small changes. Although the Tet and Chunjie are celebrated on the same day most years, every once in a decade, the time difference between China and Vietnam causes the two variations of the lunar new years to fall on successive days.

Unlike in China, the lunar new year is celebrated for only three days in Vietnam, but the festivities carry on for about a week. Although some people think that the Chinese and Vietnamese Lunar New Year are the same festivals, this is most certainly not the case.

The people in Vietnam consider black and white to be unlucky colors because they are mostly worn during funerals, and so they are avoided. Bright colors such as yellow, red, pink, and orange are worn instead. 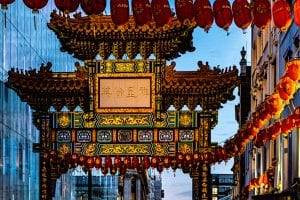 The Vietnamese believe that the first person to enter one’s home on the day of Tet determines the way that the rest of the year is going to turn out. So, usually, the homeowner leaves right before the clock strikes midnight and enters right after, so nobody else can tamper with the fortune of the house and the people living in it.

The locals are also very particular about the people they invite to their homes on the day of Tet. Ideally, a person with good morals, ethical values, good karma, and good luck is invited. This practice is called xông nhà. The zodiac sign of the guest must also be compatible with the homeowner; else, he is not eligible to enter.

The first day is reserved for spending time with the nuclear family. The second day is meant to be spent with close friends and the joint family. The third and final day is intended for the teachers, who are remarkably respected in Vietnam.

Frequent sightings and traditions during the festival of Tet include:

Vietnam during Tet is a beautiful sight. Ho Chi Minh City does not sleep throughout the festival, and the entire country has an atmosphere of joy and celebration, which offers a truly once in a lifetime experience.

Seollal or the Korean New Year marks the completion of one calendar year on the Korean Lunar Calendar.

The most prominent tradition followed is that all the family members all across the country gather in unique clothing known as seolbim, at the house of the eldest male relative, and offer their prayers and sacrifices to their ancestors to earn their blessings. This tradition is locally known as Charge. All the females in the family prepare the food that is to be sacrificed, and the males in the family offer the menu to their ancestors. This is followed by a ceremony where both male and female family members attempt to earn the ancestors’ blessings by eating the food that is sacrificed. This ceremony is called eumbok.

The traditional food prepared on this day is called tteokguk, which is a soup-like preparation made using sliced rice cakes, beef, egg, and various vegetables. After the food is finished, the younger members of the family bow and offer their respects to the elders of their family. The profound bow they take is called sebae. After this, the elders provide the children sebaetdon, which is money given to the children as a Seollal gift, along with the blessings and best wishes of the elders, much like the practice followed in Vietnam and China.

Families spend the day amongst themselves, playing games like yunnori, which is suitable for all ages. Some other games played are Hwatu cards, played by two or three players, and Yut Nori. Much like their Chinese and Vietnamese counterparts, the Korean calendar years are also represented by animals, and the Korean people turn a year older on the Korean Lunar New Year day. This is locally known as their “fake” age.

Contrary to common belief, the big city of Seoul feels empty as the people leave the city to go back to their hometown in an attempt to spend the new year day with their families. Shopping malls, amusement parks, and some restaurants are open, but most services remain closed along with public transport.

No matter what country you are from,, the joyful atmosphere during this time of the year will surely lift your morale as well, should you decide to pay a visit to Asia during the Spring.

only a couple parts of the world can match the sheer cultural history and diversity that Asia offers. Should you find yourself wanting to plan a trip to somewhere during the spring season, you might want to seriously consider visiting Asia during that time of the year. The Spring festivities across the continent are a once-in-a-lifetime experience that cannot be replicated anywhere else. The people are extra helpful during the Spring, so you can worry less about them being rude to foreigners.

However, you might want to plan your trip to Asia early since transportation is reserved as soon as sixty days before the holiday period due to the native Asian people going back to their homelands to reunite with their families. Costs are also high during this time of the year, but the investment is indeed worth it if you decide to tour Asia. Few sights can be better than a fireworks filled sky, a city in the mood to party, and ancient Asian cultures that transcend eras of time.