Victoria port is a part of the city of Victoria in British Columbia, Canada. The town is relatively well-known for its uncanny semblances to an English town, its pleasant temperate climate, and significantly, for being home to the prominent Victoria Port mentioned above.

The city known for its layout that enables cycling and walking is an approximate distance of around 60 miles from Vancouver in mainland Canada and Seattle in Washington, a part of mainland USA. It’s also connected to Port Angeles, WA, and is at a distance of just 25 miles. 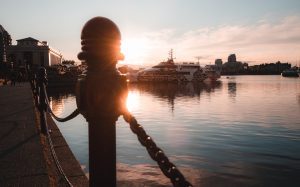 Victoria British Columbia is an easy to access city for the world, with its year-round availability of airplanes and an international airport, seasonal cruise ships, and most ferries. Notably, the Victoria BC to Seattle WA ferry, the Victoria Clipper, docks on the Victoria port and provides service all year round. Thus, it makes for a somewhat viable spot for Victoria port. A significant commercial and recreational harbor.

Victoria port is a part of the southern region of the city of Victoria in British Columbia, which is a significant Canadian province. Essentially divided into Upper, Inner, Outer, and Middle Harbors that enable cruise docking, have ferry terminals, and much more.

It is central to the cruise ships especially fixated on tours that include Alaska and Canada in their routes. Amongst some of the most famous cruise ships that regularly dock on the Victoria port belong to brands and companies like Disney, Carnival, Holland America, and others from rather luxurious brands that include Oceania, RSSC-Regent, and more.

The Victoria Port is varied in its functionality. The harbor that was a spot for shipbuilding and commercial fishing in the past, now hosts many recreational vessels, cruise ships, and ferries. Alongside that, so many of the summer festivals and carnivals also occur on the harbor and its number of ports.

In addition to that, Victoria port helps flourish the local ecotourism businesses, the whale watching industry, regular ferries to Port Angeles and Bellingham, and Seattle in Washington, USA.

Ogden Point is arguably one of the most significant parts of the Victoria port. With two cruise ships docking piers and the ability to simultaneously host 4-5 ships, Ogden Port is one of the busiest ports of call in Canada.

At a scalable distance of around 2 miles from the center of Victoria and approximately 18 miles from the Victoria International Airport, Ogden point makes for a lovely cruise port.

Pier A and B are part of the Ogden Point. With two deep-water berths for each with fantastic mooring facilities, both piers make cruise ship docking viable and accessible. Spread across a region of 30 acres, it boasts of the ability to dock the RCI Oasis class, which is acclaimed as the world’s largest passenger ship.

For pier A, the northern berth extends to about 800 ft while the southern for the same extends to a whopping 1100ft. For pier B, after the renovations and expansions on the dock, the births were opened to about 1040 ft, allowing berthing for large vessels and those with gross tonnage (GT) of 225k tonnes. 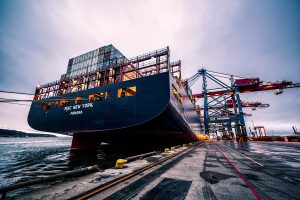 For the visitors and the tourists on board, there are Canadian border agencies set up on every pier. There is a car parking facility, ship-to-shore bridges, baggage handling, tourist information desk, currency exchange, water taxis, and much more.

For your recreational purposes, there are several activities that you can do and several other facilities. Restaurants like Breakwater Bistro, Whitehall Rowing and sailing if you want to sail, a heliport, a friendly space built for a beautiful stroll by the ocean, and the Na’Tsa’Maht, which is a mural The Unity Wall that depicts art.

You can also experience the ultra-famous cold-water diving experience here at Victoria port, no matter the level of experience you have! From the point itself, there are tours and excursions into the city that allow you to explore the famed city. These may include but are not limited to the Butchart Gardens, renowned Empress Hotel, whale watching, enjoying the Craigdarroch Castle, and more!

The greater victoria harbor authority or GVHA is a non-profit organization that, along with Transport Canada, manages the Victoria Port and its portions. The terminals, piers, and marinas mentioned below all fall under the GVHA

Located on the Inner Harbor of the Victoria port, in the downtown, the Hyack terminal is responsible for vessel moorages and services to add the plane. The cold water diving experiences and other water adventure companies have set up shop in the Hyack terminal.

The Wharf Street floats are a very significant part of the Victoria port. Settled in the northern region to the seaplane terminal in the port and is owned by the Greater Victoria Harbor Authority. This is a beautiful place to roam around in, just like the city of Victoria. With enchanting views of the Capitol Buildings, lovely little shops and restaurants, and the walkway that it offers to the amazing Johnson St. Bridge and the Bastion Square just before it.

On this marina, according to the needs of the ships required, there are available slots for monthly moorage or mooring your boat there for even more extended periods if there is an offseason, which is generally between October and May. It is safe and secure due to it being gated throughout the year.

Just walking distance from the Wharf St. Is the Broughton Street Pier. With open access, this pier serves as providing the necessary facilities to the guests onboard, crew members, tourists, and visitors, or just the locals.

Here you can find a restaurant, or if you want to go somewhere, there are water taxis available, and there are vessels found here to aid you in whale watching. If you’re mooring the ship on the Wharf St, then there are laundry, showers, and washroom facilities for you here too!

In a somewhat contrasting fashion to the marinas mentioned above, Johnson Street, of the Victoria port, is essentially used for commercial purposes only, with little to no recreational facilities.

There are docking available for monthly moorages only and is primarily used for and by people using the fishing boats and boats and ships used for commercial purposes.

Located in the North Saanich region, the Swartz Bay ferry terminal covers about 30 acres and is a mere 10-minute drive from the Victoria International Airport. This ferry terminal is about a distance of 20 miles from the Victoria port, boasts of 5 berths, and administration building, several local supporting and house-sustained kiosks, a cafeteria and coffee shop, and more. 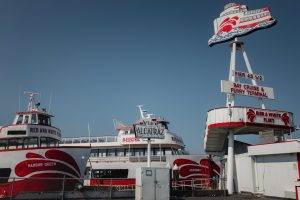 This ferry terminal provides daily service to the Tsawwassen Ferry Terminal, which is essentially the mainland of BC and connects the island to The Southern Gulf region and the islands there, which include the Salt Spring, Mayne, Pender, and others. Its also connected to some major public transportation routes and the British Columbia Highway no. 17.

For the outdoor excursion enthusiasts in this region, Swartz Bay connects Victoria to the 18 miles covering Lochside Regional Trail.

The Victoria port and the area that comes under it can be accessed through many different ways: 3-4 harbors, the Gorge waterway, the Portage inlet, and more.

Amongst all those mentioned above, there are mainly four harbors that provide an entryway to the Victoria port as below:

The middle harbor of Victoria port, on the other end, lies between the Shoal Point in Victoria to the famed Colville Island on the Esquimalt side of town. It is east of the significant Inner harbor. It homes the fisherman’s wharf docks, a seaplane terminal, vessels that are non-power-driven, and the clearance dock for the customs Canada alongside the Victoria Canadian Coast Guard station on the Shoal point.

The inner harbor is arguably one of the most beautiful parts of the Victoria port, and not only that but perhaps the entire city. Situated in the town between the Laurel Point in Victoria and the Songhees Point to the western side of Victoria, the inner harbor is a site you do not want to be amiss of.

Over time, the inner harbor has become quite the tourist spot and an attractive place to visit in the must-be tourist itineraries. Surrounded by the mega-giant that is the famed and classic Empress Hotel, Fairmont, and the old and gloried Legislative Buildings, this harbor on Victoria port is a sight to soothe the eyes.

There are countless places you can visit here on the Victoria port or just at a mere minutes walking distance away. For example, the Royal British Columbia Museum, located in the area of the inner harbor, is an excellent place for history lovers that hosts exhibitions tours and much more.

Here you can find the National Geographic IMAX theatre and the gorgeous Pacific Undersea Gardens in the area of Victoria port. The Undersea theatre also hosts interesting Live Dive shows, which are grand. The world-famous Butchart Gardens are also pretty close to the region. The Craigdarroch Castle is also a beautiful sight the enhances the British essence of the town with its impeccable woodwork and Victorian era’s objects.

Eating and Travelling around

The streets of the inner harbor of Victoria port are decked with things to do, shops to visit, and restaurants to eat at. The beautiful cobblestone streets home authentic Canadian art and souvenir shops, a lit-up beautiful boardwalk, and restaurants and cafes like the La Roux patisserie, the IL Terrazzo, and many more.

On this side of the Victoria port, you can enjoy fascinating carriage tours by the Tally-ho carriage tour company that offers horse-driven carriage rides around the city, rent a bicycle to go around, take a water taxi to somewhere or the famous shuttle bus. Walking, though, is a preferred way to explore all the beauty that the Victoria port’s inner harbor offers and enjoy the inborn romance of the place.

An integral part of the Victoria port experience is the shuttle bus service. For the price of $10, this bus is a giant and an attraction in itself. Stretching to about 45 ft, this shuttle bus boasts of being the first-ever purpose-built and fully electric double-decker bus in the entire continent of North America, which makes it a giant feat to look out for.

With 99 seats, plus a standing room, with approximately 65 chairs on the upper floor, this is a bus of the dream. It has USB points for each seat, wheelchair lifting, and aids for easy mobile convenience, and quite a low floor design, which proves to be easy access for everyone. 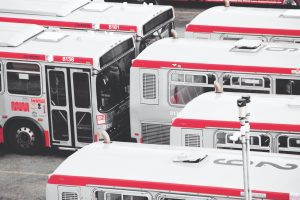 The Wilson’s Group of Companies, which are known for their travel services from the Ogden Point cruise terminal, also of Victoria port, got together with the GVHA to build-up and also upgrade Victoria port’s shuttle bus service from the terminals to downtown and launched new and comparatively quieter and more impressive busses.

Therefore, the Victoria port is quite an essential spot for the water industry in and around Canada. The inner harbor just adds beauty to the well laid out functionalities of the port.

Other things you can enjoy in Victoria, West Coast, and Vancouver Island:

City of Victoria: 10+ Best Things To Explore And Experience!

What to do in Victoria BC; The Complete Guide