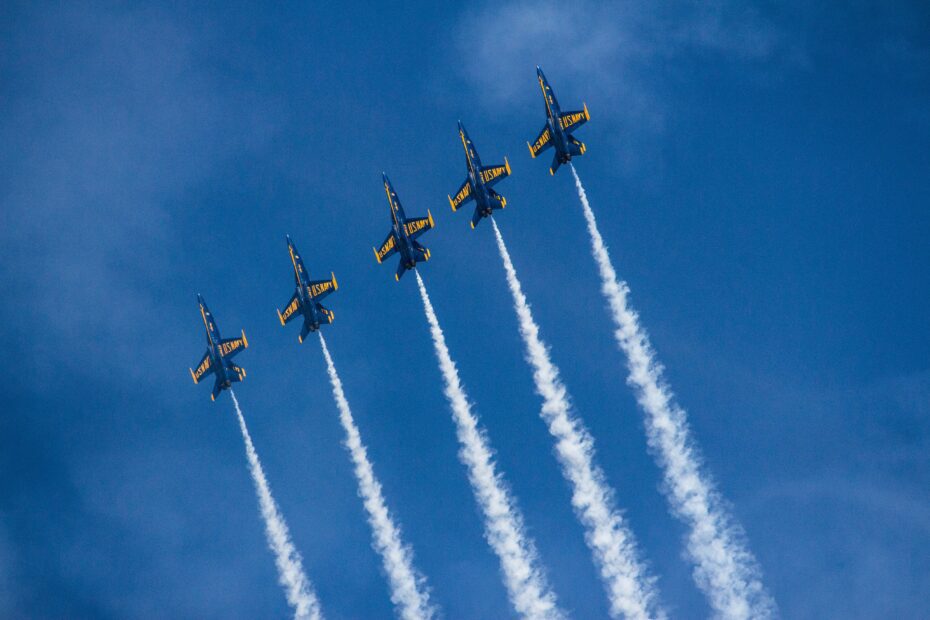 Blue Angels team hosts a major portion of their shows in the US. But in Canada, their location is at Abbotsford International in British Columbia, which is a great event every year. Let us look into a quick overview of the Blue Angels air show and why you should watch it. 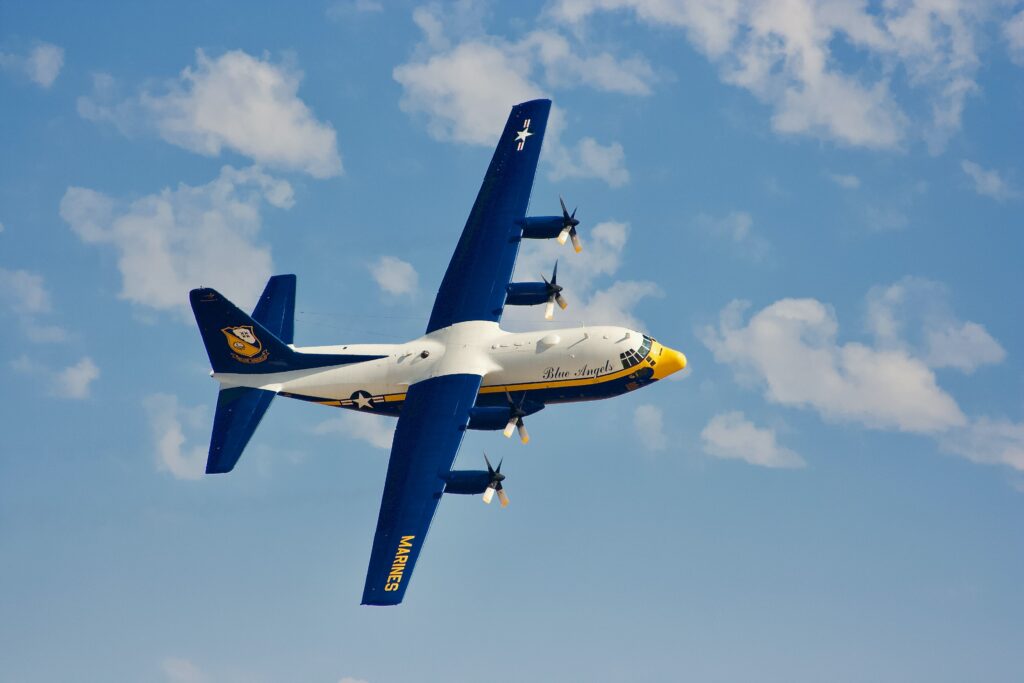 Photo by Luke Jernejcic on Unsplash

The Blue Angels is a flight demonstration squadron formed in the US in 1946. They perform aerial displays every year mainly in the US and Canada. Many of the operating procedures and strategies are still in use, which have been demonstrated since the beginning. Their only show outside is at the Abbotsford International, Canada. And there are many exciting reasons for you to watch it.

Why You Should Watch the Blue Angels 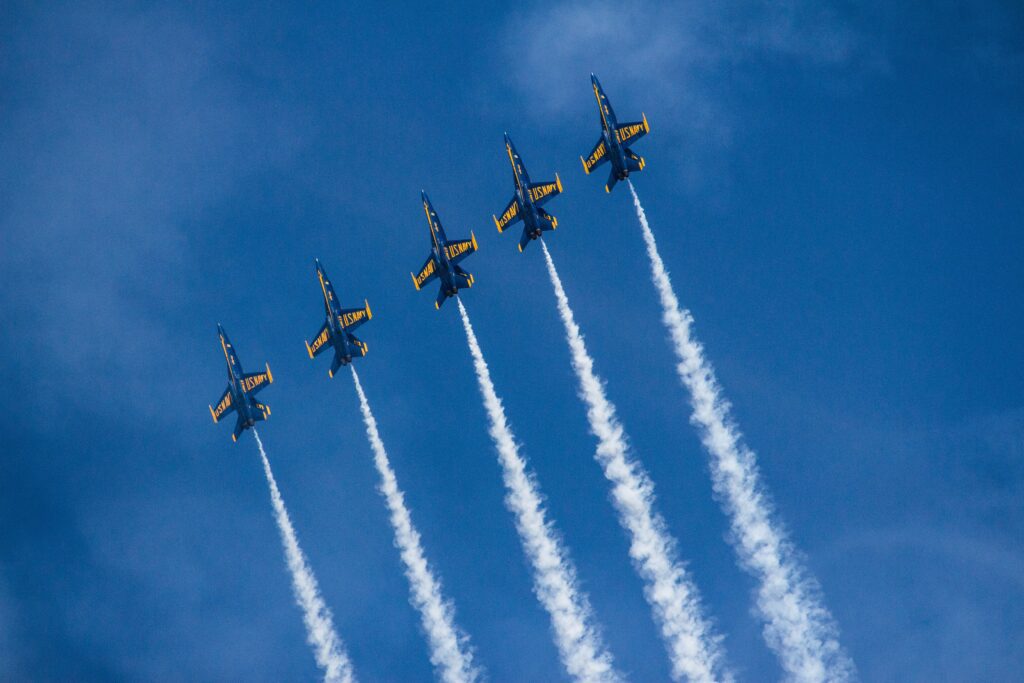 Photo by Jonathan Saleh on Unsplash

They form loops and rolls and change from one formation to the other in a beautiful manner. The Solos are the ones that do a mind-blowing performance with their speed and sudden turns. Sometimes, 2 Solos perform at a time and do formations like opposing passes, belly to belly, mirror formations, etc. They join with the diamond formation at the end always.

The authorities make sure that these performances are done according to the weather conditions. If there is a clear sky, there would be major shows and, if not, small shows. They always make sure to take care of the safety of the performers. So if there is not enough light, they never risk putting up a big show. The formations are so beautiful that you would gape at the sky in awe.

Abbotsford International began its air shows in 1962 to promote flying, and until now, it has been a significant reason people come to the place for watching the air shows, especially by Blue Angels and for travel. The Flying Club of Abbotsford International collaborated with the Abbotsford Rotary Club to fund the event. It soon resulted in a major success making it the largest air show in Canada.

In 1967, it was included as the official Canadian Centennial project with a wide range of aircraft, including the Blue Angels. In 1970, Canadian Prime Minister Pierre Elliot Trudeau declared it as Canada’s National Air show. By the 1980s, the show was more significant as it featured the first F/A-18 Hornet in Canada, Canada’s new front-line fighter jet.

The air show of 1986 was the most famous and important. It featured five demonstration teams; the US Navy Blue Angels, the Patrouille de France, Brazil’s Esquadrilha da Fumaca, Italy’s Frecce Tricolori, and Canada’s Snowbirds. The show also attracted more than 300,000 visitors in three days.

The year 1998 was an unlucky year for Abbotsford, as it could not hold the show due to the financial crisis. 2002 marked the 40th anniversary of the show, along with the 9/11 incident threatening its safety.

2018 saw the return of Blue Angels to Abbotsford International after 15 years which, drew a large crowd; it was the first after the rise of the 2000s. So with a vast history of more than 50 years, the Abbotsford International would be one of the most famous and most-watched air shows in the world, and with the addition of Blue Angels, it would be the best scene to watch.

Along with the air show by Blue Angels, Abbotsford International features many other attractions that could attract many visitors. This includes static aircraft displays, autograph booths, food courts, etc.

The show’s most popular attraction is the 350,000 square feet static display of military, civilian, and commercial aircraft. You will also be able to explore the inside of cargo planes, get inside the cockpits of military aircraft, and get personal lectures by the aircraft’s crew.

Another attraction is the S.T.E.M Zone, which includes many activities and interactive sessions, aviation career groups, etc. this would be a major opportunity for science geeks to explore the world of technology and engineering fields.
Also, there would be a kid’s zone that attracts many children and adults. They are open from 3:30 pm to 7:30 pm on Fridays and 11 am to 4 pm on the Saturdays and Sundays of the air show.

On Fridays, there would be a display of hot air balloons that takes place at night. Its an incredible opportunity to click great pictures as you would be getting many beautiful frames. Also, you would get to see beautiful fireworks shows on Friday nights. They are one of the most magnificent firework displays of Lower Mainland.

Food trucks and Beer tents attract a wide range of people who come to watch the air shows. The largest food trucks of Lower Mainland could serve exotic food from Malaysian, Thai, and Jamaican cuisine and fare food like donuts and corn. To quench your thirst, you will have access to a wide range of beer, coolers, ciders, etc.

You can also explore the air show with drinks in your hands, excluding the static display area. You should be above the age of 19 if you want to get a drink. And the list of the food trucks featuring could be found in the app of the show.

The Blue Angels have a determined and voluntary team of 16 officials that serve the squadron. The team is a cooperative one so that they would work together in complete unison.

Every year, the team would select three officials as jet pilots, two as support officers, and one Marine Corps C – 130 pilot to replace the members who will be leaving. The Boss is selected by the Chief of Naval Air Training, who have at least 3000 flight hours and have commanded a jet squadron.

The Blue Angels select their officers based on ability, communication skills, and military bearing. Usually, the officers serve two years in the team. After that, they would return to be a team member. They must be aware that they have to serve the United States Navy and Marine Corps by exhibiting pride and professionalism in their air shows.

Blue Angels air show at Abbotsford International also allows you to volunteer for the program. The program always gets pumped up with the support of the volunteers. The volunteer team would be adequately trained to arrange the plans.

You will be provided with lunch and beverages by the organizers. This would be a great experience for you as you would be a part of Canada’s largest air show.

You would also be given volunteer or service hours to submit for your extra-curricular work hours if you are a student.

Guest services are the most important thing that you should do as a volunteer. There would be various air show venues and there is the need for serving in all these places. Also, some areas require volunteers to be above the age of 19. Another is the duty of onsite operations, which needs an important hand as they take care of the show being run smoothly. They will be having a wide range of tasks.

There is another section called the patron safety group who takes care of the guests along with security officers and policemen. Age restrictions are applicable here too. The technical team takes care of critical works like electrical, plumbing, painting, repairing, etc. These works take place many months before the air show and hence needs the volunteers many months before.

Also, the volunteers need to maintain a specific code of conduct while dealing with guests and visitors. They are expected to do their duties properly and must require expertise and security clearances. 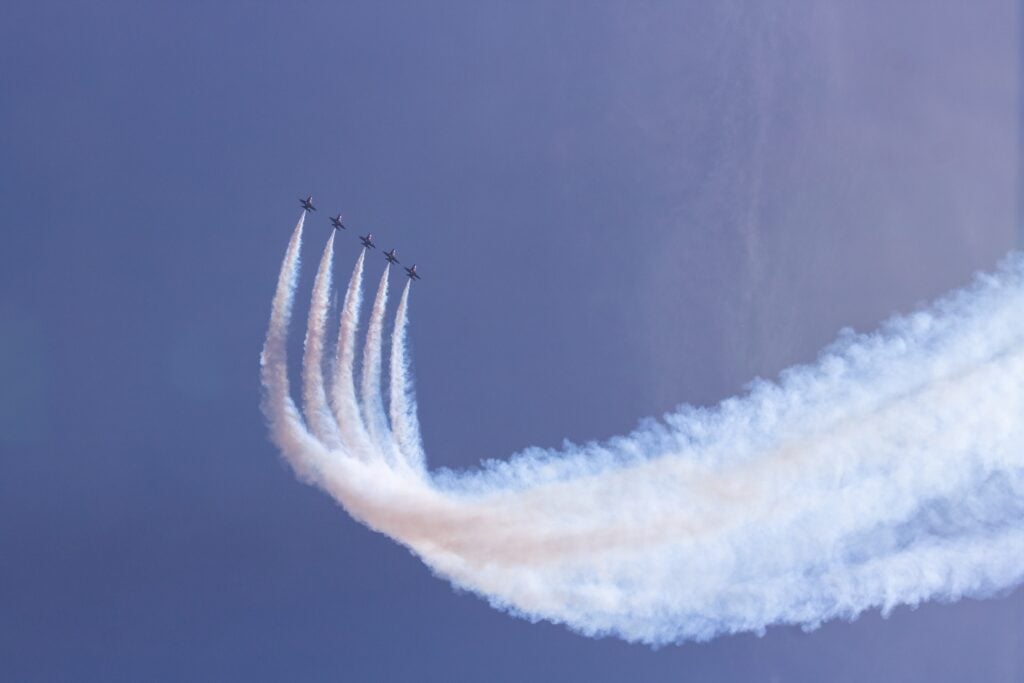 Photo by Chandler Cruttenden on Unsplash

The Blue Angels have added a new addition to their aircraft jets. In July 2020, they received their first F/ A -18 Super Hornet. The Director of the Blue Angels Super Hornet team, Captain Eric Doyle, flew the jet across Florida.

The Super Hornets are very much bigger than the legacy models. They are 4 feet long and has a wingspan of about 45 feet while the older one was 40 feet. They are more powerful than the older ones and have more air time. The more they have air time, the more the show would entertain the viewers.

7. Become a Member of the Abbotsford International Air show Society

With the Abbotsford International air show of Blue Angels, you could also become a member of the Abbotsford International Air show Society. It is a BC non-profit organization managed by a group of staff and runs under the board of director’s leadership. The society runs the air shows as well as do many charity works. As part of society, many funds are received through sponsors, and with their help, they provide for charitable organizations.

When you are a member of the Air show society, you would benefit from various number of member-only events. Being a member helps you to provide a lot for the program. You would also be able to explore the field of aviation in the educational sector. You would get an opportunity to speak with the organizing committee in several meetings so that you get a chance to express your ideas regarding the running of the event.

If you love air shows and would like to contribute to it, you can apply to be a member of the society. The membership costs 10 dollars per year and includes benefits like access to special membership events, vote in the Annual General Meeting, air show tickets with price offers, E-newsletter all around the year, and a limited edition challenge coin.

The Blue Angels were also part of the mainstream media many times. Many movies, short films, documentaries were made, based on Blue Angels. ‘The Blue Angels’ was a television series, starring Dennis Cross and Don Gordon, filmed with the help of the Navy. It was aired from 26 September 1960 to 3 July 1961. ‘Threshold: The Blue Angels Experience’ was a 1975 documentary film, written by Dune author Frank Herbert, which featured the practice and performances of the team.

And there are many other movies and series aired about the Blue Angels like, ‘To Fly!, Blue Angels: A Year in the Life, MythBusters, Blue Angels, and the Thunderbirds, etc.’

The Blue Angels have been performing their shows for the past 73 years and have got wide acclaim all over the world. The program is very much famous when it comes to Abbotsford International. The show itself is a great festival in the region. Along with the famous and proud shows they have done, many accidents and deaths happened during the Blue Angels air show. In the whole history of 74 years, 26 pilots and one crew member died due to air show accidents and wars. The squadron has been trying to take the maximum safety since.

Today, Abbotsford International Air Show by Blue Angels is one of the famous air shows in the world and also, the national air show of Canada. You would be delighted to watch the Blue Angels at Abbotsford International as they bring along with them the history and legacy of more than half a century. The program offers much more than just an air show. It would be a memorable one and gives you a peak into the pride and professionalism that holds the team of Blue Angels together.