A major water body of north-western North America, the Yukon River, flows through the Yukon territory in Canada. The river originates from British Columbia and has a massive drainage area that measures up to 832,700 square kilometers. The rivers Teslin, White, Pelly, and Stewart feed the Yukon River. Whereas, Tanana, Porcupine, Koyukuk are its major branches in Alaska.

Throughout the year, Yukon is calm and shallow. However, it swells with the spring waters. Massive mountains with dense woods encase the Yukon river. The narrow valley widens towards Alaska and the resulting plateau is better known as “Yukon Flats.”

History of the River

Interestingly, Yukon has been a witness to some important events. Several stories will tell you that a birchbark canoe was formed on the shores of Yukon. And then it widened into the southern end of Lake Laberge. Many indigenous people traveled through Yukon with rafts and moose-skin boats.

The indigenous people formed fish camps in early and late spring to harvest fish. They used fish weirs to trap salmons. A historic fish trap is located on an island near the Three Way Channel. Records show that Yukon has changed its course a few times and left a region too dry and unfit for fishing.

In 1896, Yukon underwent a drastic transformation because of the Klondike Gold Rush. Many new migrants led to an increase in the steamboat traffic in the region. Mining operations were carried out on the tributaries of the Yukon River. The hustle and bustle at Yukon saw a decline when the Alaska Highway was finished in 1942.

Today, Yukon is still important for the indigenous landscapes. Over time, it has become a popular tourist destination for adventurers who seek thrill in canoes and wilderness. There are many visitors who, in every few years, paddle down the Yukon River to the biannual Moosehide Gathering and the Dawson City Music Festival.

Since the late 20th century, climate change causes the river ice to break before spring. This leads to ice-jam floods in the nearby cities. Dawson city has witnessed such ice-jam floods.

Moreover, Whitehorse releases all the sewage and toxic elements into Yukon Rivers. The toxins are then discharged into the water supply of nearby cities. Recently, the contamination levels in the Yukon waters have surged. This has led to fish-contamination in fishes of lakes like Laberge, Burbot, Trout, and Northern Pike. 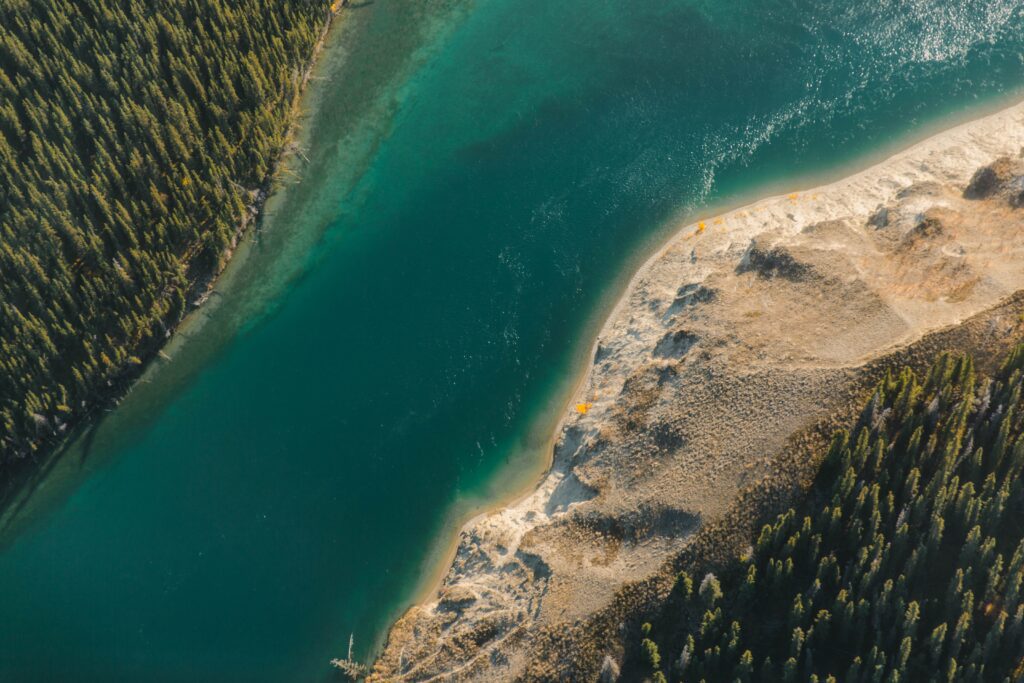 Photo by Kristina Delp on Unsplash

Yukon has got its name from the Gwich’in language. The name Yukon means ‘great river’ which can be seen through various aspects of the Yukon River.

The source of the river is situated in the northwest part of British Columbia from where it proceeds to flow through Yukon, then into Alaska. Finally, it empties in the Bering Sea at the Yukon Kuskokwim Delta.

2. Length of the River

To be precise, 2040 kilometers of the river are in Alaska, and the remaining 1150 kilometers are in Canada. The average flow of the Yukon River is 6430 cubic meters per second.

Joseph from Cabin On The Road, USA, CC BY-SA 2.0, via Wikimedia Commons

It is a river delta situated where the Kuskokwim and Yukon rivers empty in the Bering Sea, which is on the west coast of Alaska. It is approximately 129500 square kilometers in size, which makes it one of the largest river deltas in the world.

An interesting fact is that it is even more significant than the Mississippi Delta, and can be compared to Louisiana state of the U.S. This delta mostly consists of tundra and is protected under the Yukon Delta National Wildlife Refuge. 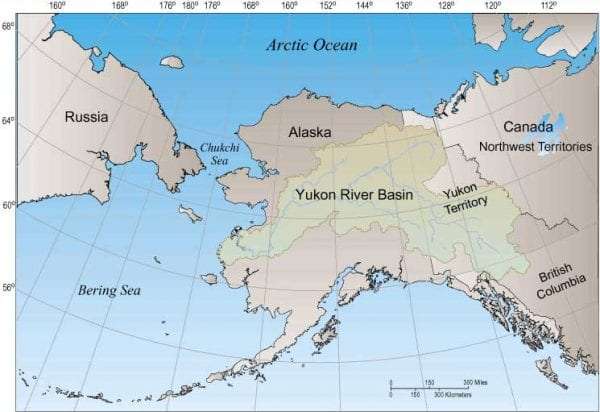 The watershed or the drainage basin of the river covers approximately 832700 square kilometers of North America. It is the fourth-largest drainage basin in the continent and is unbelievably larger than Texas by 20 percent.

Until the mid-19th century, this area was in control of North American Indians. It was also one of the main ways through which people traveled during the Klondike Gold Rush of 1896-1903. The paddlewheel riverboats were a dominant form of transportation during the 1950s when the Klondike Highway was being completed.

Big Salmon, Teslin, Stewart, Pelly, Porcupine, Klondike, and Koyukuk are the north bank and main-east tributaries. The south bank and west tributaries are Tanana, Takhini, and White. In 1867, after the United States purchased Alaska, the assets of the Russian American companies were acquired by the Alaska Commercial Company, and several posts were constructed at various locations on the Yukon River.

Despite the river being so long,  there are just four vehicle-carrying bridges across the Yukon river namely:

A car ferry that crosses the river in summer at Dawson city is replaced by ice bridge during winters over the frozen river. There were many plans proposed to build a permanent bridge in March 2004. However, they were put to hold as the bids that came in were very high than the budget that was planned.

Yukon river has one of the longest salmon runs over the world. Every year in Yukon territories, Alaska and British Columbia, salmons like Chinook, Coho, and Chum return to their terminal streams.

The villages along the river had been and continue to depend on salmon for their commercial, subsistence, and cultural requirements. Salmons are prepared by drying, smoking, and freezing traditionally for dogs as well as human consumption. Fishing methods that are common on the river consist of dip nets, fish wheels, drift nets, and set gillnets.

The most extended wooden fish ladder on the Yukon River is the Whitehorse Fishway at the Whitehorse dam. It is 366 meters long and helps Chinook salmon migrate on the final stage of their journey.

The Inter-Tribal Watershed Council of Yukon river constitutes tribes and 66 First Nations in Canada and Alaska, residing along the river. This council is responsible for the cleaning up of the Yukon River and its protection.

The Yukon Basin is a very little populated and the least developed area of North America. The basin’s central resource includes its isolation, scenery, and population. All of this is attractive to the tourists as all that they are seeking is a less crowded and scenically endowed area.

Other than its breathtaking scenic views, Yukon Basin has a lot more to it. Moose, grizzly bears, and wolves are often spotted at the river’s edge. Multi-colored mountain bluebirds fill the sky, whereas beavers and otters occupy the waters.

The Yukon river is also used to generate hydro-electricity. However, it remains one of the major undeveloped hydroelectric resources in North America.

Lewis River was the former name of the Yukon river’s upper course. It ranged from Marsh Lake to the confluence of the river Pelly at Fort Selkirk. “The Thirty Mile Section,” which is a portion of Lewis River in Yukon covering the area from Lake Laberge to Teslin river, is a unit of Klondike Gold Rush International Historical Park. It is also a national heritage river.

Other than that, the longest annual canoe and kayak race in the entire world is the Yukon River quest, which is 715 kilometers long.

For more information about the Yukon river, Click here.

If you are anywhere close to Yukon, you should visit the place as well as the Yukon River. Yukon has everything in nature you would like to explore. Above that, the residents of the place are friendly, welcoming, and love interacting with new people. They also like getting to know the culture of the tourists who visit the region.

If you are adventurous, a nature-lover, and want to travel to a place that will make its way to your heart, Yukon is just the right place. What aspects of the Yukon river interested you the most? Drop-in your answers in the comments section below!