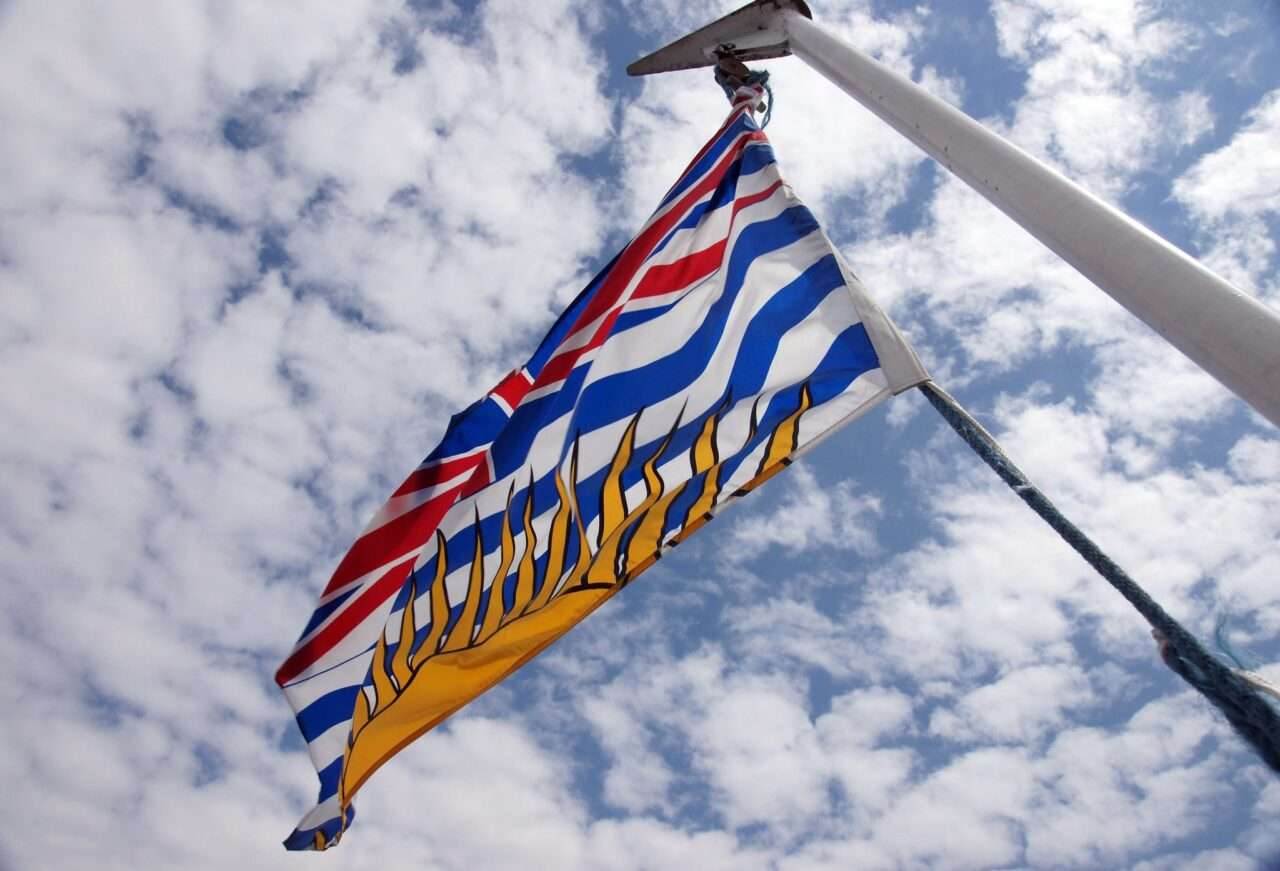 With its lush rainforests, lakes, coastal waters, and high mountains, British Columbia is one of Canada’s most beautiful provinces. British Columbia is your go-to place for indoor and outdoor activities- be it skiing, hiking or even shopping! People of different countries and cultures worldwide call British Columbia their home, creating a diverse society.

Everything can be found and done here. I’m sure many of you have been there and know all about its beauty and diverse activities, but there are, in fact, many interesting facts about British Columbia that you might not know.

Wanna know the most interesting facts about British Columbia? Go on, keep reading

British Columbia, located on the west coast of Canada, is the country’s third-largest province in terms of size. It spans an impressive 944,735 square kilometres (364,764 square miles), making it larger than many countries around the world.

This vast size offers a diverse range of landscapes, from coastal regions and mountains to forests, lakes, and rivers. It’s also home to a variety of climates, from the mild, rainy west coast to the colder, drier interior regions.

With so much to explore, it’s no wonder that British Columbia is a popular destination for outdoor enthusiasts and adventurers. From hiking, biking, and skiing in the mountains to fishing, boating, and birdwatching on the coast, there is something for everyone to enjoy in this diverse and beautiful province.

The size is one of the most interesting facts about British Columbia.

7. The population is the second most interesting fact about British Columbia. Yes! It is the third-largest province in Canada. However, it is not as crowded as you might think it is. Less than five million people live here, so on average, you’ll find about five people per square kilometre, which means it has a pretty low population density.

8. British Columbia was home to First Nation groups with a deep history with a significant number of indigenous languages. British Columbia is actually still home to more than 200 first nations. But of course, the arrival of European settlers did not bode well for the natives, and they were slowly pushed into a minority. Before the time of explorers, the original residents in BC were mainly first nation people, including Tlingit, Shuswap, Chilcotin, Haida, and Sekani tribes.

10. Vancouver is also one of the most densely populated cities in North America. On average, 5,500 people live per square kilometre.

Planning a trip to Vancouver? Click here to know all the details!

11. The flag of BC actually is an accumulation of different symbols. The top has a Royal Union Flag representing the British Heritage. The central King Edward Crown represents the royal family. The western location of the country is shown by the setting sun on the lower half. The blue and white lines show it’s the location between the Rocky and the Pacific.

12. The fur trade was a big thing here, too, but it was the Fraser Canyon Gold Rush of 1858 that brought an influx of American and European settlers, and it’s what prompted London to designate it as a colony.

13. When the colonies of Canada, Nova Scotia and New Brunswick United formed the Canadian Confederation, British Columbia wasn’t initially a part of it. Still, the main reason why the colony joined Canada was the gold rush and the large influx of settlers.

14. By the end of the gold rush, there was a need for proper infrastructure. The burden of debt and economic depression pushed British Columbia to join Canada, and it succeeded in 1871.

5. JOINING THE CONFEDERATION AND BC DAY

15. Joining the confederation, British Columbia became the sixth province in Canada. The date was July 20th, 1871.

16. In 1974, a bill to acknowledge BC Day was introduced in the parliament.

17. BC day usually is celebrated on the first Monday of August. It is a civic holiday.

18. While the province has a white majority of European descent, it’s also remarkably diverse. About 23 percent of the people living here are not of European descent. Chinese and Indian people alone account for over 16% of the population. Still, there are also large communities of Filipinos, Iranians, Jews, Japanese, Koreans, French, Italian, Polish, Norwegians, Romanians, Hungarians, Ukrainians, and the list goes on.

19. The aboriginal population, i.e. the First Nations, represents almost 5% of the people of BC. Thus British Columbia is one of the most ethnically diverse places in North America.

20. Major film production studios have also turned Greater Vancouver and nearby areas into one of the largest film production centres in North America, earning the nickname Hollywood of Canada. This is one of the most interesting facts about British Columbia.

21. More than 25,000 people work in the film industry in British Columbia.

22. Even the famous Twilight movie series was filmed right here.

24. You might know it best as the shooting location for The Vampire Diaries and Riverdale.

25. It is also home to some of the most famous actors and actresses like Ryan Reynolds, Pamela Anderson, Cobie Smulders, and the list goes on.

26. Also known as Canada’s Centennial Baby, the actress Pamela Anderson was born on the 100th celebration of Canada day.

27. This province has 1030 parks and protected areas and is continually expanding both the region’s number and size.

29. Some of the most interesting facts about British Columbia are its 3 UNESCO world heritage sites:

Queen Charlotte Sound is a large inlet of the pacific ocean in British Columbia. It merges with the Hecate Strait.  Now, these are two of the very few locations in the entire world that contain species from the Glass Sponge class. It was made a UNESCO world heritage site in 2018.

30. 12.5% of the provincial land is a powerful protected area home to more than half of Canada’s wildlife and fish species.

32. One in four North American grizzly bears is found in British Columbia, with a population estimated between 120,000 and 160,000.

33. British Columbia is home to almost a quarter of all the grizzly bears in North America.

34. The Grizzly Bear sanctuary is named Khutzeymateen Provincial Park, located in northern British Columbia. It is Canada’s only sanctuary that preserves Grizzly Bears.

35. British Columbia is also home toone-quarterr ( 25% ) of all black bears in Canada

36. There’s also a rare subspecies ofbears unique to this province called the Kermode bear. So if you ever wanted to meet a bear in the forest, this is the place to be. However, I wouldn’t recommend it.

37. Over one million migratory birds coming from Alaska fly through the Pacific Flyway of BC every year. British Columbia itself serves as a winter home to many of these beautiful migratory birds.

38. With such a rich biodiversity and such vast lands of unspoiled nature, it’s kind of logical that one of the world’s most famous and powerful environmental NGOs was established in British Columbia.

Greenpeace states its goal is to ensure the ability of the earth to nurture life in all of its diversity and focuses its campaigning on climate change and several other environmental factors like deforestation, poaching and even some anti-nuclear issues.

40. In the beginning, Greenpeace functioned out of the private homes of its founders in Vancouver. Still, despite its humble beginnings, the organization endured to become a globally recognized voice of reason.

11. CLIMATE AND OTHER INTERESTING FACTS ABOUT BRITISH COLUMBIA

41. British Columbia has the mildest climate of all Canadian provinces. It also experiences the longest frost-free period. In BC, flowers start blooming as early as February, while other places are still covered in snow.

42. The length of BC’s coast is over twenty-seven thousand kilometres.

43. The Pacific Dogwood is the provincial flower of British Columbia.

45. The Spirit Bear, aka the Kermode Bear, which is a rare black bear with white fur, is the provincial animal of British Columbia. Francis Kermode, a provincial museum worker, was the first to discover the spirit bear. Hence it was named the Kermode Bear after his name.

46. An interesting fact about British Columbia is that its official mineral emblem is Jade.

47. The provincial motto of British Columbia is “splendour without diminishment”.

48. British Columbia produces Blueberries and Cranberries in large amounts. It is one of the top three producers of these fruits in the world.

49. One of the most interesting facts about British Columbia is that this Canadian province is one of the most popular and growing wine regions in North America.  Almost 900 vineyards are found over 10,000 acres of land, including both wineries and independent growers. In 2013, there was a record of over 960 tonnes of icewine grapes being harvested in BC.

50. The Hanging Garden Tree is known as one of the oldest standing Western Red Cedar trees. It is located on Meares Island. It is considered to be 1500-2000 years old.

51. The oldest standing public building in BC is Craigflower Schoolhouse in Saanich.

52. The Pacific Crest Trail is one of the world’s longest hiking trails. It is located in Manning Park British Columbia.

53. Fairweather Mountain is the highest point of British Columbia. It stands atae height of 15,299ft.

55. Tweedsmuir Park is the largest provincial park in BC.

56. Della falls, located on BC’s Vancouver Island, is the highest waterfall in Canada.

57. Prince Rupert of BC is the wettest city in Canada

59. British Columbia legalized same-sex marriage after Ontario. It was the second province in Canada to do so.

60. BC holds the record for the largest number of Sasquatch sightings. The sightings date back over 200 years. This is one of the most astonishing and interesting facts about British Columbia.

61. Ocean Falls, situated in BC, experiences an average of 330 days of rain every year.

62. Nakwakto Rapids at Slingsby Channel, located in British Columbia, experiences the world’s strongest current. The current speeds up to 18.4 miles per hour sometimes.

63. Created for BC’s Expo 86 World’s Fair, the world’s largest hockey stick was acquired by the city of Duncan. It is put on display there, even today. It is almost 40 times the size of a normal stick. This is one of the most interesting facts about British Columbia.

64. The warmest freshwater lake in Canada is Osoyoos Lake. It is located in BC.

65. Nanaimo of BC was the first who introduced the sport of ‘bathtub racing’ to the world. Visa-free Travel Between South Africa and Angola Announced
Next Article