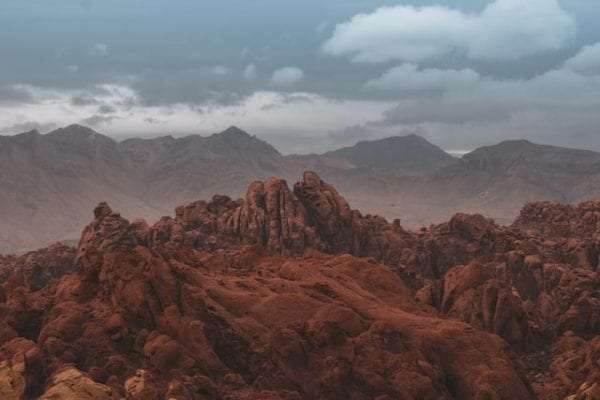 I’ve said it before, yet I’ll gladly repeat it. North America has done a better job of naming its tourist spots better than anybody else. To drive the point home, let’s address the focal point of this piece of writing: The Valley of Fire.

America, you’ve done it again. The Valley of Fire is definitely one of the coolest names for a tourist spot that I have ever come across. And the place has enough eye-catching sights and historical significance to back up the title.

Located about 50 miles from the grand city of Las Vegas, the valley derives its name from the ravishing red color of the sandstone in the region. The Valley of Fire State Park can be visited for a charge of $10 per vehicle and also offers the opportunity for visitors to camp overnight. The cost of an overnight stay at the valley is about $20. A lot of people like to watch the stars during the winter at night, and it truly does make for the beautiful scenery that makes people fall in love with the feeling of being alive. 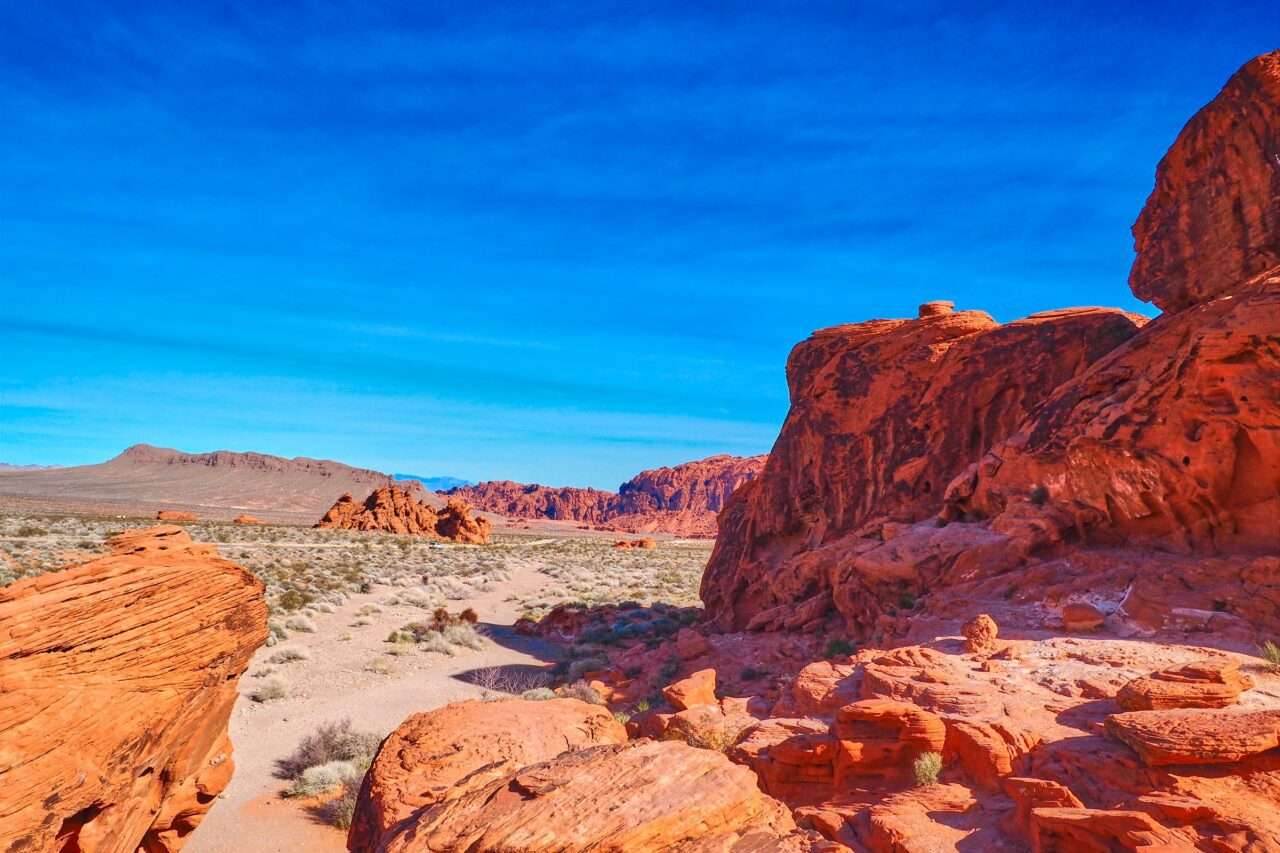 Now, a lot of people like to do their research before visiting places, and if you’re someone who wants to be the designated tour guide in the group, then this is precisely what you’re looking for! Even if you’re not so keen on research, you’ll still want to go over these facts about the scenic masterpiece that is the Valley of Fire, that very few are aware of.

1. Origins of the Valley of Fire State Park

Although the State Park, as it is known today, was established in 1935, the geological origins of the Valley date back as long as 150 million years in the past, back when dinosaurs roamed the Earth! The red desert is an exhibition of brilliant displays of sandstones and heaps of dunes formed by excessive faulting, erosion, and uplifting of the region so that it resulted in a plateau-like formation and not just an ordinary desert-like landscape. The elevation of the plateaus ranges between 402-917 meters above sea level. 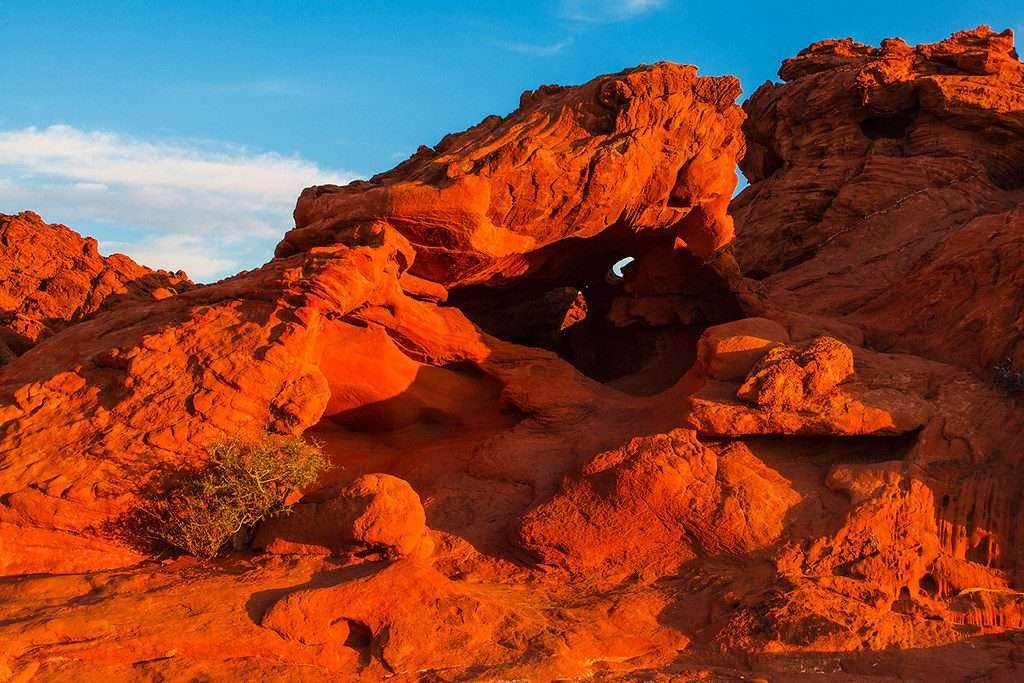 Interestingly, if you find yourself at the valley during the dawn, the sunlight reflecting on the sandstone causes the entire place to look like it is on fire. The excess of iron oxide present in the sandstone deposits is one of the main reasons for the outstanding red color of the valley.

2. It’s a Mini Mars on Earth (And a filming location)

In the Total movie Recall, starring Arnold Schwarzenegger, the scenes which showed the surface of the planet Mars were almost exclusively shot in the Valley of Fire in Nevada. To be fair, it did an excellent job of making up for the lack of flying cars to the red planet back in the old days.

But that’s not the only relation that the valley has with outer space. Scenes from Star Trek Generations, which were shown to be the planet Veridian III, were shot in the valley in 1994.

The Valley of Fire has also been a set location to various other well-known movies like Transformers and The Professionals. 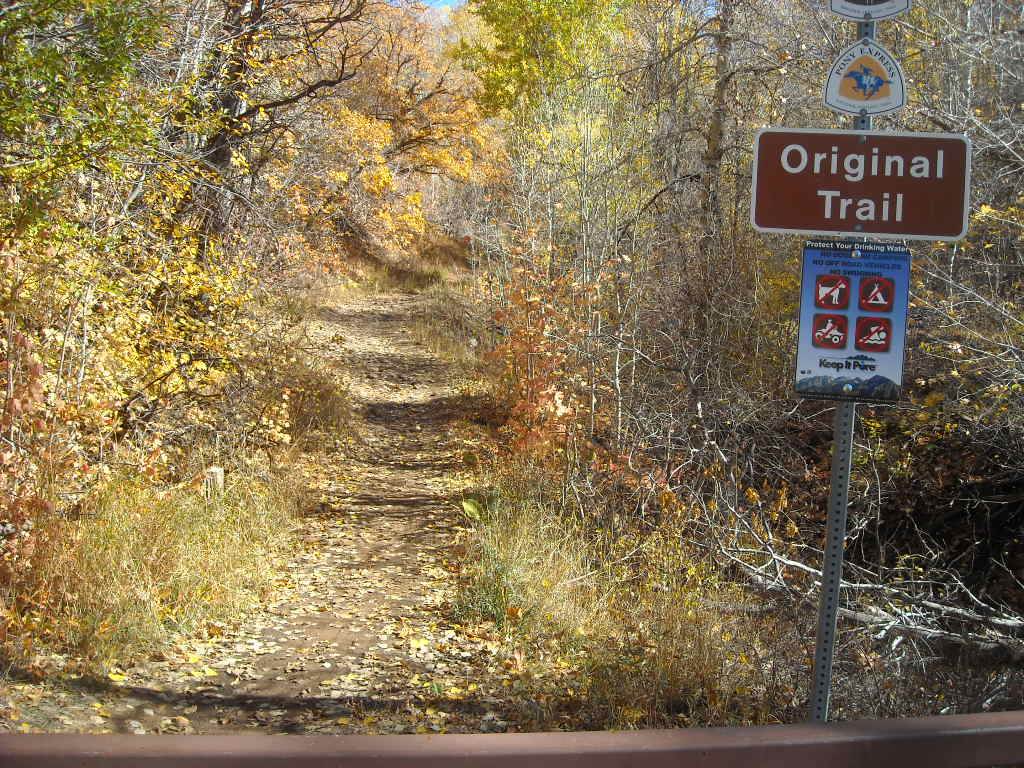 Let’s go back a little further in time from when space cars were non-existent to when interstate transport was a dream about as early as when native Spaniards were around in the Americas. They began hunting for safe trade routes from the tip of the Grand Canyon and Santa Fe, through to the region known today as New Mexico and into California.

Interestingly, the main trading routes established at the time did not go through the valley. However, there is proof that some traders did divert and take a journey through the valley. The Mormon Trail was later discovered by the members of the Church of Latter-Day Saints (who were known as Mormons. That’s where the name comes from). The Mormon Trail was famous for the people heading towards California through Las Vegas, Nevada.

Let’s dial it back a little more. I’m talking again about when English was a dream. To be a bit more accurate, back when history was a dream. A lot of brilliant examples of ‘petroglyphs‘ or rock art have been found in the walls of the valley and the caves. Historians have deemed the settlers of the valley to be the Anasazi or the Ancestral Puebloans. The numerical timeframe of their settlement should be around 300 BC to 1150 AD. 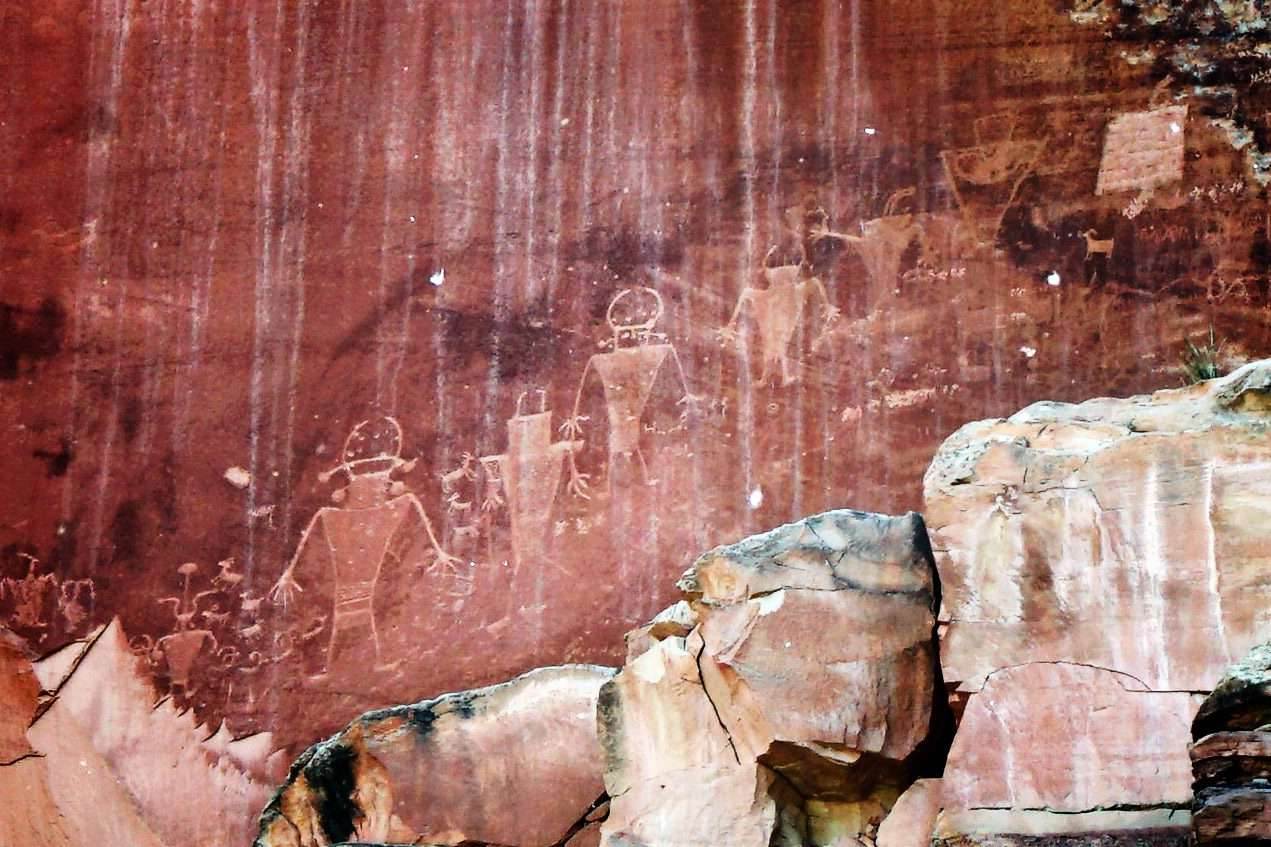 History also teaches us that the settlers were predominantly farming the extremely fertile Moapa Valley that is close to the Valley of Fire. Their culture and traditions included basket-making mostly. They usually visited the valley for hunting and food gathering along with specific religious or devotional practices that cannot be explained in detail in the common tongue.

If you’re an art enthusiast and are curious about the origins of your craft, then you’d be taking a step in the right direction by visiting the Mouse’s Tank and the Atlatl Rock, two famous sites that offer displays of the petroglyphs all year round to the common folk.

It is assumed that the ancient settlers ended their stay and connections to the valley due to an eventual scarcity of water, which would threaten the sustainability of any civilization. This is because a perennial water source is crucial to the survival and sustenance of any culture.

5. Wildlife Found at the Valley

The Valley of Fire falls en route to most destinations for migratory birds. Aside from being a route for birds to travel through, it also acts as a natural habitat to birds like the raven, the southwestern roadrunner, the sage sparrow, and the house finch.

Since the valley is predominantly a desert-like area, after all, the temperatures go extremely high during the day. This also means that the state park is home to a lot of animals that are found in desert areas like snakes, lizards, foxes, skunks, and coyotes. The animals usually come out at night when the temperature is lower in search of food. Most of the species mentioned above are nocturnal in nature. 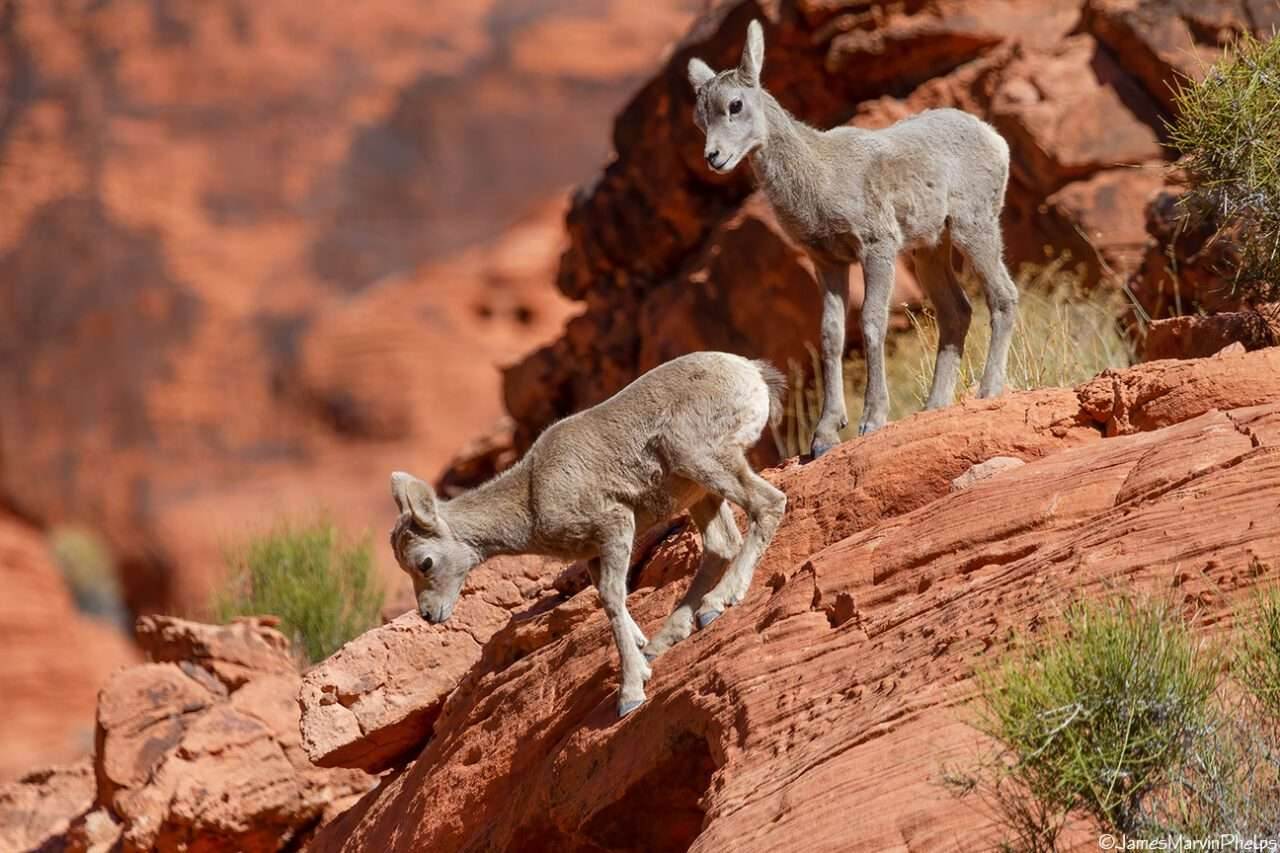 If you’re lucky, you might as well come around a desert tortoise, which is extremely hard to come by.

We usually don’t think of vegetation when we hear the word ‘desert’ associated with a place. And though the valley is by no means close in the amount of vegetation to a forest-like setting, it certainly isn’t void of plant life either.

A variety of cacti and bushes are found in the region, which includes the Beavertail and the Cholla cacti. The species of forests include the Brittlebush, the Burro Bush, and the Creosote Bush.

During spring, a lot of flora can be found around the roads near the Valley of Fire.

All the animals and the floral life found in the region are protected by the law. It is immoral and, most undoubtedly, illegal to tamper or harm them in any manner.

6. The Arrowhead Trail and the Cabins

When the dream of engines and automated transmission was realized, roads that would not be wrecked by the rain and the snow slowly started becoming a necessity. The Arrowhead Trail was the first all-weather highway to be constructed. Its construction was overseen by the Arrowhead Trail Highway Association, which mainly included the residents of Las Vegas.

The Arrowhead Trail connects Salt Lake City, Los Angeles, and Las Vegas. Although it was built before all the highways in the United States followed a numbered system that was introduced back in 1926, it is now known as US Route 91 and is the Interstate Highway 15. The Arrow Highway name is still used by some people who reside in the area.

In 1934, the Civilian Conservation Corps or CCC built three cabins near the Valley of Fire area. The cottages have been preserved to this day, and visitors can go and see the 80-year-old cabins, which also have a built-in fireplace and a great view of the vast red landscape.

The State Park is also a famous picnic spot. It has designated picnic spots within the valley with shaded areas, restrooms, trash cans, and other amenities to offer the visitors a great experience.

Valley of Fire State Park is the largest one in the state of Nevada. The area marked under the state park is a whopping 36,000 acres.

Valley of Fire State Park is known as the oldest state park in Nevada, as well as its most significant. It was established in 1935 and is 85 years old as of 2020.

Every November since 2005, the Annual Valley of Fire Marathon is held. The variations of the marathon include a 5K and a 10K run.

Water supplies are limited in the valley. However, a well was built about 1500 feet underground. Along with the well, power lines also run about 940 feet beneath the ground.

The Valley of Fire State Park Visitor Center most probably is where you would be starting your expedition of the red landscape. It was built at the ending of the 60s and was later revamped in the 80s to match the backdrop of the red rocks.

The Visitor Center is open from 8:30 in the morning to 4:30 in the evening. It offers visitors facilities like drinking water, restrooms, first aid, and parking spaces, among others.

The place is more than just a welcoming station. It offers information, books, souvenirs, and various exhibits on the geology and the history of the Valley of Fire and its surrounding areas. Everything that you need to know about the valley can be found at this Visitor Center. There are also plans set for another expansion of the visitor center.

9. The Lesser-Known Things to Do

Most of these points of interest can be visited in one day and include parking spots and restrooms so that travelers do not face a lot of inconveniences. It is recommended that you take an ample amount of drinking water with you should you visit the Valley of Fire, since the temperature soars during the day and water supplies are not that reliable since the only time it rains is during the monsoon, and only once during that time.

If you’re looking to migrate to America to experience more beautiful locations like the Valley of Fire, then this guide should help you get started.