There’s no shortage of absolutely breathtaking places to go hiking in Alberta. Red Rock Coulee is one of the areas that contribute towards making the province of Alberta, one of the most tourist favored spots in all of Canada.

I believe that every person should have opinions of their own and that you can’t have a wrong idea about anything, just a wrong frame of mind. With that said, I will layout for you everything that you need to know about Red Rock Coulee in the province of Alberta so that you can first form opinions of your own. At the end of the article, I was a foreigner who shall give you my views on the famous hiking spot.

The Red Rock Coulee can be found in the Southeastern part of the province of Alberta. The nearest city from the Red Rock Coulee is Medicine Hat, at a distance of 54 kilometers in the northwestern direction. Another really close landmark is the hamlet of Seven Persons, which can be found on the Alberta Highway 887. The coulee is a little off the main road and can be a bit hard to get to if you’re not very adept at finding your way around the beaten paths.

The Boulders at the Red Rock Coulee

There are no facilities near or at the site of the Red Rock Coulee, so be sure to stock up on all the essential supplies that you might need. Food and water in ample amounts, above all other things.

Now, the Red Rock Coulee is essentially an example of badlands. An abundance of large misshapen boulders can be found at this place, which makes it particularly interesting for geologists or stone collectors. The samples of rocks from the blocks are sure to provoke interest from any geology enthusiast or curious person in general. As is the name, the badlands region is geologically known as a coulee. The hills and the vast stretches of land turn a shade similar to that of rust when the sun shines upon the earth.

According to geologists, the large boulders found in the coulee were formed in the Late Cretaceous period. In simpler words, the blocks have been around roughly since the time of the dinosaurs. It is further classified as a Bearpaw formation or a Bearpaw shale, a category of rocks and fossils which store dinosaur remains and can be found in the provinces of Alberta, Saskatchewan, and the American states of Montana which lies towards the south of Alberta.

The material of the stones is similar to that of sandstone and limestone. The rocky formations have been subject to millennia worth of weathering agents and have eroded significantly but still retain their original composition. The bedrock in this region is also made up of the same sort of substance that makes up the boulders lying close to or on the surface of the badlands.

In the 800 acres of badlands, you will come across instances of stones like sandstone and siltstone of a variety of hues ranging from green to gray. Some other common examples of stones include ironstone, which gives off a brownish color to the area, and bentonite which imparts a very light shade of gray to the rocky, multicolored field.

A variety of marine fossils can also be found in the region, as remnants of fish, bivalves, and ammonites have been discovered imbibed in the rocky layers of the coulee. As mentioned above, the boulders and rocks have been subjected to massive erosion and sedimentation along with it. Bits and pieces of the animal remain, and shells, along with sedimentary rocks like ironstone, primary calcite, and organic cement, have also been discovered in the area.

There have been multiple layers of cement found in the coulee, which suggest various instances of erosion and sedimentation taking place over the region. The fossil materials ‘stuck’ to the adhesive and basically were the reason that the heavy cementation of the area occurred in the first place. The cement depositions made the boulders and the rocks a bit resistant to corrosion in comparison to the other elements present in the surrounding rocks.

The coulee is officially classified as a Provincial Natural Area and is governed and protected by Alberta Tourism.

Most people who visit the place are full of appreciation of the Red Rock Coulee and compare it to a Martian setting, given the endless aridity and the reddish hue that the rocks give off. It is a place that is really enjoyable for families and especially kids who would be awestruck at the sight of the enormous boulders.

Species of Animals and Flowers in the Area

Red Rock Coulee is also a notable place where wildlife enthusiasts can come over with their binoculars and cameras and spend a day watching a wide variety of animals and plants that are found in the area. Some famous flora found in the region includes the prickly pear cactus, which can be found on the walls of the coulee. The city isn’t as arid as you think it might be, and it is classified as grassland. Yes, it does have a decent amount of flora to back up that claim as well.

Some other notable flora found in the region is Juniper plants, Sagebrush, the gumbo evening primrose, broomweed, the yellow umbrella plant, and prairie crocus. The last three of the examples are the instances of colorful flowers found in the region to contrast the abundance of redness in the backdrop.

Now, let’s address the variety of fauna that you can find in the Red Rock Coulee. The animals found in this region are the mule deer, the white-tailed jackrabbit, the pronghorn, and the Richardson’s ground squirrel.

When you enter the coulee, you will be greeted by a sign that reads “Caution: You are in rattlesnake country,” clearly warning visitors that there is a genuine possibility that they might encounter a rattlesnake. 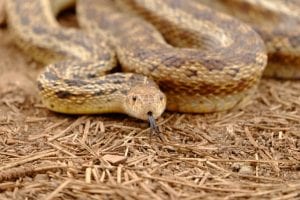 Snakes aren’t the only members of the reptile family that you can find in this region as you can also come across the eastern short-horned lizard, the bullsnake, the prairie rattlesnake and some species of scorpions, which are rather rare in the southern state of Alberta.

Since rattlesnakes are known to be found in Red Rock Coulee, take care and be wary of the sound that the snakes make when they are near you. Take a moment and locate the snake, and then work on getting out of the encounter while trying to avoid one altogether.

Although the weather conditions might be sweltering and dry in the Red Rock Coulee, there are several birds that you can also see in this region, which include the rock wren, the longspur, Sprague’s pipit, prairie falcon and the western meadowlark.

The Red Rock Coulee is a dirt-covered area, and naturally, it gets very muddy after a spell of rain in the summer because of the sparse vegetation. It is advised that you take a big car like an RV or a six-seater if you have the option because bigger wheels are better suited to deal with these sorts of conditions.

Opinions of a Foreigner

Alberta boasts of a lot of trendy tourist spots, and it could take a fair amount of time should you choose to visit all of them. The variation in the sort of places that are worth visiting in the province is genuinely mind-blowing. On the one hand, you have places like Lake Louise, Lake Abraham, and the Canadian Rockies that tower above the lakes, and on the other hand, you have rusty grasslands that boast of pre-historic remnants.

It definitely comes as no surprise that the Red Rock Coulee isn’t as popular as the other unique tourist attractions, but that doesn’t mean it’s anything less than a place well worth visiting if you’re in the area. The drive to the location offers stunning views of endless grasslands and rocky fields that present a stark contrast in color from a distance, often separating into layers when you view them from your car.

Some might prefer the mountains, some might love the beach, but you’ll find very few people who would pick grassy, rocky hills over the two extremes. Given the sheer diversity of the sort of places you can visit, Canada leads the rest of the world by a long shot when it comes to tourism. Some of the sites are just not talked about much, which isn’t really fair to them, after all.

The boulders are up to two and a half meters wide and offer a very distinct image and different instances of how erosion affected the rocks differently. It is a place well worth visiting with your family, if you have kids, or going with your significant other to spend some quality time hiking and watching wildlife together with them.