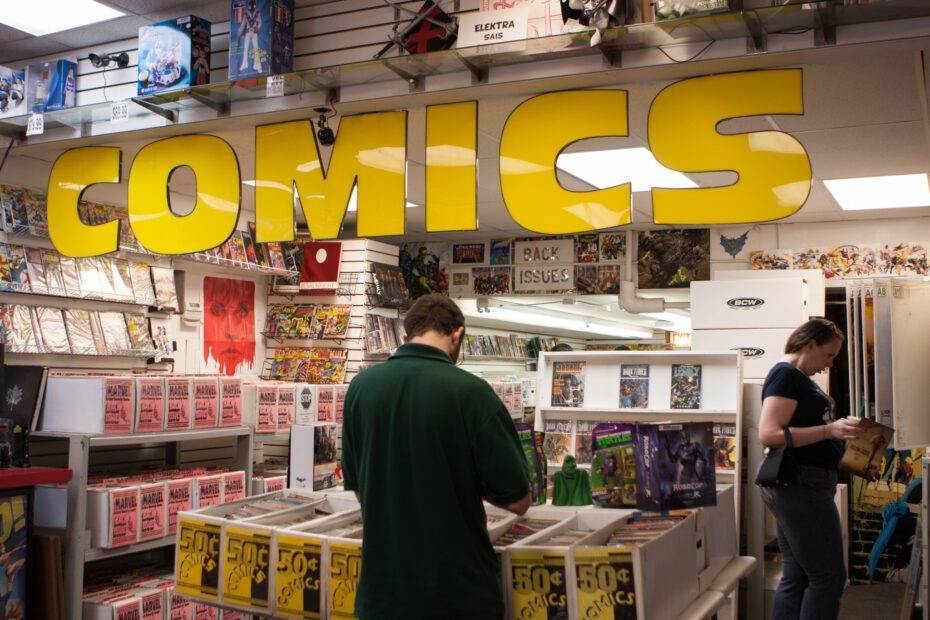 Are you a comic buff? Because if you are, we have something exciting for you. Would you like to know some of the best comic book stores in Toronto?

There are so many great formats or mediums of books globally that it is hard to narrow it down to the best. And one such great medium is Comics. A comic book is a format of a book with written narrative & descriptive prose. It is one of the greatest forms of art & medium, which people of all age groups enjoy.

Comics might be mistaken to be just mere books with colorful pages & whimsical characters. But there’s more to comics than just that, and comic books tell stories to readers in profound ways than ever imagined. This is why we are here with a guide to the six best comic book stores in Toronto.

Why Are Comic Books Loved By All?

For a long time, comic books have been very popular, both among kids and the youth. In the modern world, comics are a great way of bringing whimsical characters into action. Moreover, comic books are cheap as compared to other formats of books. Every person can afford to buy one and can have a good time reading some fiction.

These books bring about inspirational tales of how the good triumphs the evil. Each account reflects a vintage event & values of the time. In kids, comic books awaken a greater sense of imagination, and as far as the adults are concerned, we all have an inner child in us that never gets old.

The characters, the tales are very interesting & powerful, which is why comics are still very popular in today’s time.

Moving on, in this article, we have narrowed down the six best comic book stores in Toronto. So, if you are still very much into comics, this is a great chance for you to visit one & find an interesting read for yourself.

Research shows that people who are into comic tales & characters are also a fan of mystery games. This is why we have a guide to the escape room games in Toronto; you might like to check.

The comic book stores in Toronto are a paradise for someone who does not just love reading comics but is a fan of collecting vintage & new-age comics. These stores that we have narrowed down features issues to satisfy every comic fan.

And along with that, you get your superhero artifacts too. These comic book stores in Toronto allow people of all tastes & ages to come together & find some amusing reads.

Let’s check out the stores:

It’s a store that serves the best coffee and features some of the best new-age comics. The Sidekick is a perfect blend of comic book store + coffee bar, offering a cozy space to readers.

The Sidekick was established in 2015 by Chris Watton in Queen Street East. This store is Watton’s dream come true. As it is a mixture of both of her passions: comic & coffee. So, this is not just any comic book store but also a cafe.

The Sidekick offers a great space for both the diehard comic fans as well as the casual readers. Visitors will come across two different environments inside the cafe. They feature all impressive works of big publishers like Marvel, DC, Dark Horse, Image, including a wider indie comics section.

They open up a whole rack of new releases every Wednesday, so most people visit on Wednesdays to get their hands on the new releases. Moreover, to make things interesting, the cafe comes up with creative ideas to keep its readers engaged. Recently, they introduced a “create a comic” activity for the kids.

You can even shop online at https://www.thesidekickcomics.com/

The Beguiling in College Street is one of the most revered comic book stores in Toronto. This store was opened back in the year 1987, and ever since then has set a benchmark for comics & graphic novels in Canada.

The store racks up comics from the old times of the 1930s up to the present time. This store is certainly the one for hardcore comic fans who loves to collect rare copies of their favorite series. Any comic which is hard-to-find in today’s time may be easily discovered in any of the racks of Beguiling, or if not, they can get it for you.

Over the years, the store has sponsored many comic-related events, including book launches, author signings, & readings. They do not just offer you comics to read but bring you closer to the world of comic heroes & tales.

Since 2003, the staff of Beguiling rounds up to host the Comic Arts Festival, an event that helps bring illustrators & comic creators together under one roof to celebrate their form of art.

The Comic Room, first opened as The Paperback Exchange in 1978, is one of the oldest comic book stores in Toronto.

Three years following 1978, in 1981, the store was established as The Comic Room, and ever since then, it is serving as a staple store for the community of McCowan & Lawrence Avenue.

Over the years, this store has become one of Toronto’s favorite by featuring the hottest issues & newest releases. This store has been known as the ultimate source for valuable back issues & hard-to-find ones. They feature about 20,000 back issues in the store itself.

And as for new releases, they stack up on the latest books, every Wednesday,  The store mainly deals with DC, Marvel, & Image comics. And they provide trade paperbacks of all new fun-series or TV adaptations.

The Silver Snail has been one of the most popular comic book stores in Toronto’s comic art community for a long time. Earlier, the store was located on Queen West; however, recently, it relocated to Toronto’s epicenter Yonge & Dundas.

With a new location, The Silver Snail upgraded itself to new heights. The store now accommodates more space for readers & stacks up more products than ever. The store is divided into different sections featuring a gaming section, clothing section, vinyl collectibles, statues, comic back issues & new releases.

The gaming section has been given priority in their new store by introducing new board games, RPG systems, & card games. They even host Dungeons & Dragon nights in the store.

The clothing section on display has a new variety of shirts, props, masks, and hats. Along with that, they have a separate section for young comic fans. Kid-friendly merchandises are on display over this section, and the kids can even sit down around a small table by the area to play with the toys & action figures.

Located on the West side of Queen Street, the West End Comics is one of the most friendly neighborhood comic book stores in town.

The West End Comics is an independent, family-run business in the west end of Toronto to build a community of their own. The store was build in 2012 out of a life-long passion for superhero characters & comic tales.

The store deals with collectibles, action figures & miniatures a comic book fan would love. They are full of delightful toys for comic nerds. They feature all ranges of comics from the mainstream ones to the lesser-known, including back issues.

In-store, they feature a wide range of products other than the regular comic stuff, including RPG systems, board games & graphic novels. Moreover, they do not just sell stuff but buy from customers too.

They ship & sell internationally via their online store; however, no exchange & return policies are available for products bought online.

Coming to an end, the next store on this list of best comic book stores in Toronto we have is Paradise Comics in Yonge Street.

They feature mainstream comics like DC, Marvel, and books from small publishers & independent companies. They are the source for everything you will look into, from older comics to the newest editions, variants, & graded books. And not just limited to the books, the store deals with all sorts of collectibles, toys, games & other comic merchandise.

All the comic book stores in Toronto are like mines of gold, and you need to dig into the right place. There is an abundance of vintage or classic comics as well as new-age editions. Most of the stores these days deals on buying comics & rare collectibles from customers too. So you can either buy stuff or else yours too.

There are over 15-20 comic book stores in Toronto; however, we have just narrowed down the six best that would undoubtedly satisfy every comic fan’s taste. Whether you’re a Marvel supporter or DC, there are plenty of stores in Toronto to cater to your geeky needs. After all, Toronto is known as a city with a great comic history.