The Lafarge Lake is an absolute delight to check out during any time of the year, but the free light show surely adds to the charm during the winter. Taking the evergreen line to the lake station is one of the best choices that you can make. It offers a great chance for you to enjoy a brilliant evening full of lights.

Having an average depth of 13 ft, and a maximum depth of 26 ft it is home to a decent amount of aquatic life. Lafarge Lake is a pretty decent place and is safe for people of all ages to have a stroll in. It is housed in the Town Centre Park in the heart of the city of Coquitlam.

The park is open throughout the year and operates from 11:30 in the morning to 7:30 in the evening. The timings are subject to change during the winter season when the surroundings of the lake are decorated with some of the best lighting displays in all of Canada.

Lafarge Lake, 2020: Its Beauty is in Simplicity

1. What You See is What You Get

The pavement is mostly gravel, and it is one of the best places for a date if you and your significant other like going on walks. You can also have a Sunday Stroll with your furry friends. However, it is required that they be on a leash.

There are ice cream trucks nearby, so you can be sure to indulge in some sweetness for your taste buds. There’s also a beautiful fountain in the middle, so you have something pretty to watch while you do the rounds.

There are certain places in every city which have something special about them, even though they’re not the most naturally appealing sites. This is the one in the city of Coquitlam. The heart of the city has a beautiful water body to capture its simple spirit.

On the docks of the Lafarge Lake, you’ll find dining tables with chandeliers above them. It is a brilliant place to unwind and probably have a picnic if you’re up for it!

The festive season at the end of the year is something truly amazing. Check out this article to get to know all the things that you can do to make your Christmas in Canada special. It snows in almost every single part of Canada, and the province of British Columbia is no different.

The Lafarge lake is one of the most crowded places in the city during the holidays. And with good reason. The entire area around the lake is lit up with almost 100,000 lights that make for some amazing views with a clear night sky behind them. 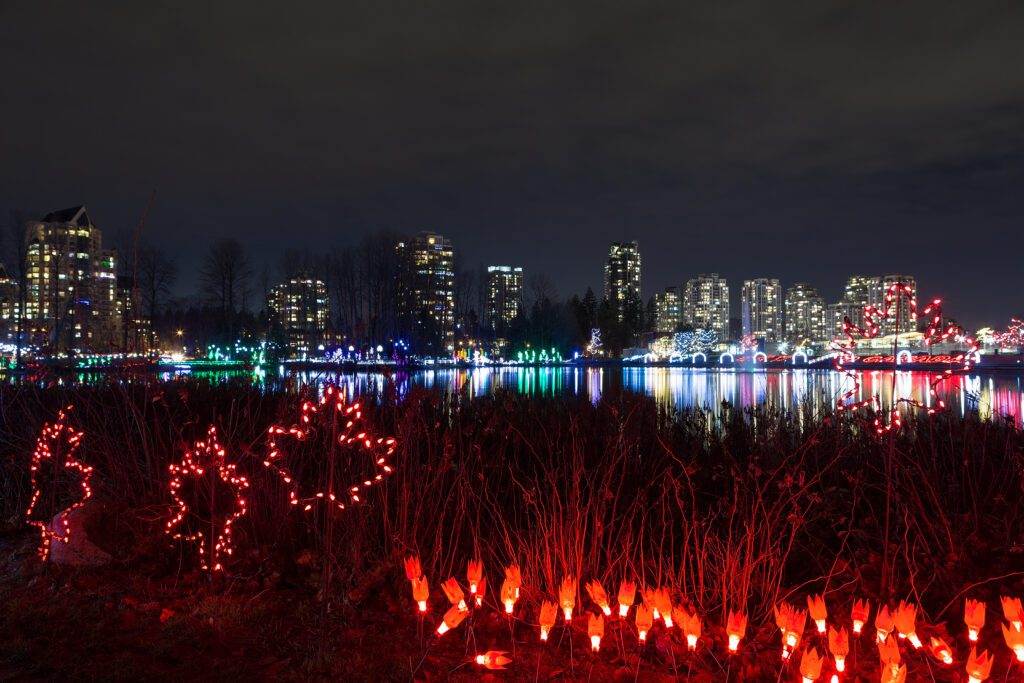 The lights are put on at the end of November and can be seen until the middle of January. Do make sure to get your camera, as you can take away some really amazing shots from the light show that you might now find elsewhere.

The authorities do a pretty decent job of maintaining the park, as the snow is cleared regularly so that people do not have difficulty walking. Especially, for the senior citizens. A lot of residents of Coquitlam make it a yearly tradition to go and see the lights display as a family.

The decorators change up the design of the light show almost every year, so there’s something new to look forward to with every winter. The decorators also make use of the trees and the bushes in the area, covering the entire place with lights for the people to enjoy.

The vendors cash in on the crowds, of course. There are hot chocolate and mini doughnut trucks to the delight of the visitors, as it offers some warmth in the chilly weather.

The lights show around Lafarge Lake is one that borrows from various cultures as well. Chinese lanterns can be found at spots throughout the walk.

Ask anyone in the city of Coquitlam what you can do at Lafarge Lake. Most people will ask you to bring along a fishing rod so that you can have a chance at landing yourself a big one.

Anyway, some of the most common species that you will come across at Lafarge Lake include beavers. No guarantees on whether you’ll see a dam or not. The type of fish that you can land mainly include brown bullheads, common carp and bluegills.

Photo by Brian Yurasits on Unsplash

During the spring months of February through the end of March, there’s a chance that you might land yourself a rainbow trout as well. So be sure that you’re patient with your end of the line!

While spending an evening here, you can get a loaf of bread and try to feed the ducks here. It’s worth the time and is a lot more relaxing than you’d expect it to be.

There’s often swans swimming in the Lafarge Lake, and eagles soaring high above the waters.

Every year since 2009 during the third week of March, the shoreline of the Lafarge Lake is the site of the annual Water’s Edge Festival. The festival is a part of the British Columbia Spirit Festivals, a government initiative.

Celebrations take place all across the province with various festivals held in the many different cities. It was originally a festival of music only, but has now evolved and taken other art forms under its banner. Those other art forms include dance, visual arts and design along with the original idea of a music festival.

There’s something special about all these festivals. And the special thing about the Water’s Edge Festival is the fact that it involves 25 hours of nonstop performances by various talented performers from all across the globe.

Along with the edge of the Lafarge Lake, the festival is also staged at the Evergreen Cultural Centre in the city.

The station that you’d want to get off on if you’re trying to reach the area by Skytrain is the Millennium Skytrain station. From there, it’s a very short walk to Lafarge Lake.

Photo by Franco Fang on Unsplash

You can also drive into the park, to see the lake. Parking is free and so is entry to the Town Centre Park. It is recommended that you reach the Town Centre Park as early as you can during the evening in the holiday season, as it tends to get incredibly crowded.

A lot of people have rather heated interactions over the parking as well, so that should give you a fair idea of the crowd. It is also recommended that you follow the crowd when you’re trying to see the lights during the holiday season. It becomes an absolute headache if you go in the opposite direction.

The lake is very well laid out, and the pavement along the lake has markers to guide visitors around. All the directions around the lake can be found near the paved route.

The perimeter of the lake also has playgrounds for the little ones to enjoy, along with sports courts for those who are a bit older. The park is a pretty big property, and there are quite a few fully developed courts for the older boys to have a game at.

Currently, the Town Centre Park is undergoing developments for a lot of additional features.

It can be booked for various sporting events and festivals, that need a venue.

Apart from offering sporting facilities, the Town Centre Park is a pretty place to be. There are a few flower beds for people to relax by and spend the evening relaxing or having a meet-up.

Spanning five hectares of water, Lafarge Lake is one of the most well-known landmarks in Coquitlam, British Columbia. It is an artificial lake that was originally intended to be used as a quarry. Over time, it has become one of the most scenic places to take a walk in the city of Coquitlam.