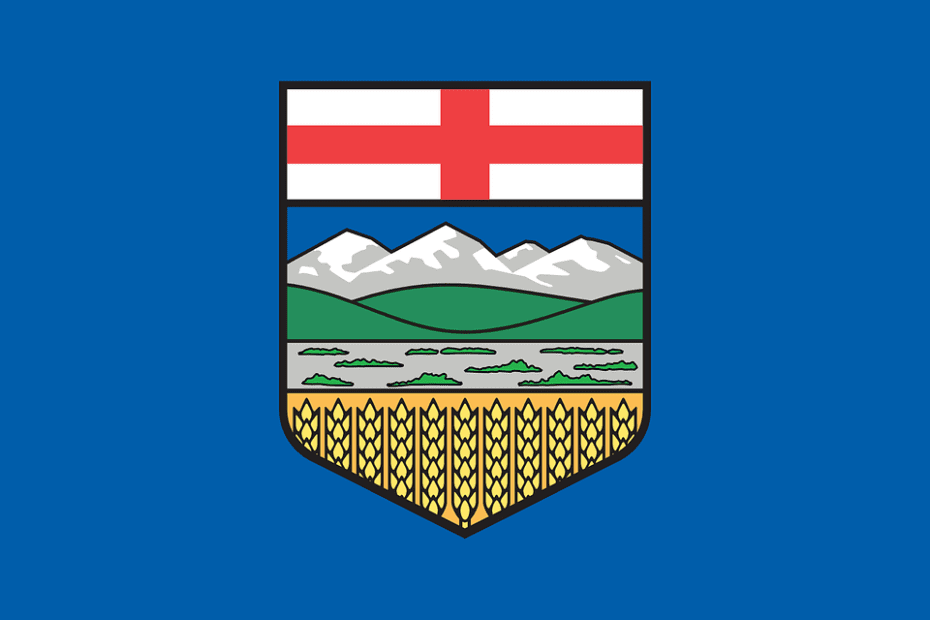 Alberta is among the only two land-locked provinces of Canada, with the other being Saskatchewan. It is surrounded by British Columbia on its west and Saskatchewan on its east. Montana state of United States of America surrounds the state to its south while Northwest Territories cover it up on the Northside. It is located in the western part of Canada. The eastern part of Alberta is arable land, but its western part is mountainous. Alike all other Canadian provinces and territories, Alberta also has its own unique flag.

Alberta is the sixth-largest Canadian province in terms of area and is home to nearly four million Canadian people. The province was named after Princess Alberta, the fourth daughter of Queen Victoria. The region is rich in natural resources. Alberta has several mines as a great source of employment generation for the people of the region. The capital of Alberta in Edmonton, although Calgary is the most populous city. 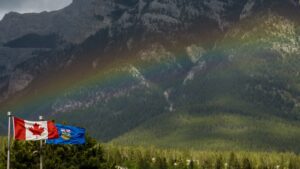 When Alberta became a state in 1905, it had not authorized its flag. But with growing time, the demand for a separate flag kept rising. People saw an opportunity in the upcoming centennial celebration of the Canadian confederation as a means to get their desire for a provincial flag fulfilled. Common people wrote petitions to Premier Ernest Charles Manning. In November 1966, petitions from social credit women’s auxiliaries of the Alberta social credit league were submitted to the premier. All these petitions called for the right of Alberta to have its provincial flag.

Eventually, on January 17, 1967, the flag was approved and adopted by the Alberta legislature. The flag had the shield in blue background. The shield had a St. George’s cross on top of it and a landscape consisting of snowy mountains, hills, and prairie land on a wheat background. The flag of Alberta serves as its official symbol since then.

Evolution of The Alberta Flag

The Coat of Arms was originally devised in 1907 by a royal warrant. Over the years, modifications have been made to the Coat as per the desires of the people. In the year 1980, modifications were made to add a crest, supporters, and a motto to it. The modifications were given Royal Warrant on July 30 of the same year.

The Coat of Arms carries the provincial motto of ‘Fortis et Liber.’ It means strong and free. The crest of the Coat of Arms has a crown upon a beaver. The beaver sits on a helmet with a red and silver wreath. The supporters on both sides of the shield are a gold lion and the pronghorn Antelope.

The Coat is not a free emblem, and its use is restricted. If you want to use the emblem, you need to have the permission of the Minister of Cultural, Multiculturalism, and Status of Women.

The Shield of the Coat of Arms was adopted as a separate official emblem. It came to be known as the Provincial Shield. This shield can be divided into three different parts. The top part of this emblem has St. George’s Cross over it. The cross is red, and its background is white. The middle part of the Shield has snow-capped mountains above green hills. The skies are blue, and there are prairie lands below the hills. The wheat field is illustrated at the bottom of the shield in deep yellow.

The common public is permitted to use this emblem with just one condition. The condition is that there should be no alterations in the emblem.

The flag was last confirmed and given legal protection by the ‘Emblems of Alberta Act’ of 1980. Although the shield was modified to include a crest, supporters, and a motto, the same was not added to the flag. Alberta has its provincial legislature authorized to make any changes to the official emblem in this regard.

The two most prominent colors of the flag, blue and gold, are regarded as the provincial colors of Alberta. Blue is referred to as Alberta blue, and gold is Alberta gold.

Meaning Of The Alberta Flag 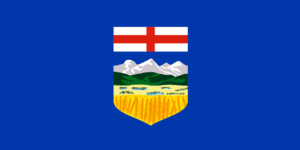 Each of the components of the Alberta flag has its own significance.

Flag of The Lieutenant Governor

The Lieutenant Governor of Alberta has their personal flag. The LG is the crown’s representative to the province of Alberta. When the flag is displayed, it implies that His Honour is in the province.

The flag is put on the roof of the legislature building besides the flag of Alberta, the Canadian flag, and the royal union flag. The Governor-General of Canada approved the flag on September 28, 1981.

The flag is roughly the same as that of Alberta, the noticeable difference being the tapered shape of the shield. Also, the flag of the Lt. Governor has a crown over the shield. This crown signifies that he is the representative of the crown, Queen Elizabeth. The additional feature of this flag is that ten golden maple leaves surround the shield of Alberta. 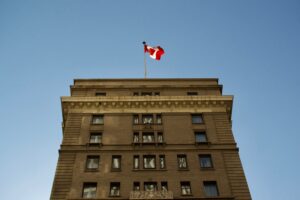 Flags are the symbol of pride and respect. The flag of Alberta is its honor, and you need to keep it up. There are certain rules and regulations that you need to follow for the proper usage of the flag. The flags have to be raised at hail mast during the following cases of deaths:

The flags would be required to be at half-mast from the day of notification of the death. They remain half-mast till the funeral or memorial service for the departed soul does not take place. The flag can be hosted at half-mast at the following places on the advice of the Alberta protocol office:

In addition to these, the flag has to be flown at half-mast at the following dates:

As per the established norms, the Canadian flag must be blown at full mast at Victoria Day and Canada Day. All flags will have to be raised at sunrise and lowered at sunset unless they are illuminated.

The Alberta provincial flag forms the identity of Alberta. It is an important part of the heritage and must be respected and felt proud upon.