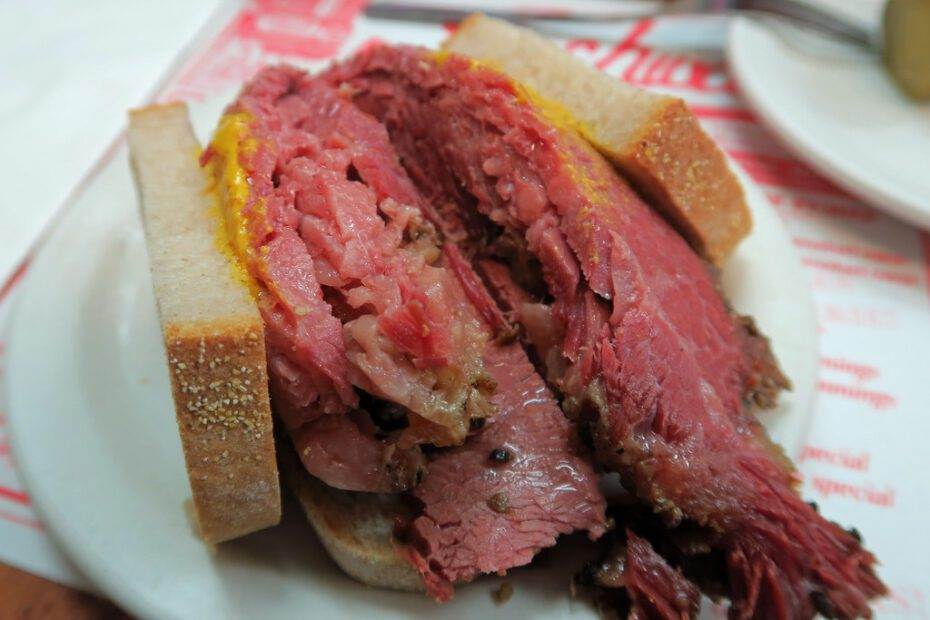 All about the Montreal smoked meat!

This article will show you the complete step-by-step process of preparing this mouth-watering smoked meat. Food is not just about preparation, and hence, we will also delve into its history and cultural identity. So, let’s get started!

Like most food items, the history of Montreal smoked meat is riddled with confusion. No one knows for sure how it got introduced to Montreal. Various Jewish Delis have led claims to the same. But, what exactly is a deli?

Technically speaking, a deli is any private establishment that sells a selection of exotic foreign-made food. During the 18th century, it originated in Germany and in the mid 19th century it spread across the United States.

European immigrants to the U.S. and Canada popularized deli meat. Nowadays, many large retail stores also have a deli section.

The first smoked meat sandwiches have been served in a deli located on St. Laurent Boulevard, near Ontario Street. Each deli has its secret recipe for smoked meat.

Since Montreal smoked meat is a kosher-style meat product, it is essential to understand the latter term.

Kosher-style refers to food commonly associated with Jewish cuisine. Kosher is a set of dietary laws dealing with the foods Jews are permitted to eat and how those foods must be prepared following Jewish laws.

So, with that aside, let us prepare our list of ingredients to start our smoked meat recipe!

The other spices and seeds may vary according to your preference, but take the amount of Prague powder you use. The amount referenced here – about 2.5g per kilo of meat – is the tried and tested one. It is the one that can make or break your smoked meat.

When it comes to the type of brisket for preparing Montreal Smoked Meat, some people may prefer to go with a super lean one (sort of a trimmed brisket), while some may like more fat on it (going towards the whole brisket). Fats are crucial to meat texture and provide much flavour, so don’t be afraid to have some!

Take out the brisket and remove the hard fat. It is advisable to keep around 0.4 inches of fat (about 3/8 inch). As said earlier, fat is responsible for much of any smoked meat’s taste.

Please take all the spices together and grind them in a mortar and pestle or a spice grinder. It depends on how coarse or fine the final spice mixture is. Remember to add the salt and the Prague powder after grinding all the other ingredients because you want them to be relatively coarse.

Finally, mix these all together in a bowl. Again, take extra caution while weighing the Prague powder.

Keep the spice-covered brisket in the coldest part of your refrigerator for nine to ten days. Turn or flip the brisket every day. A lot of water will be released, but do not drain it out unless it is excessive. The brisket will cure itself.

Waiting for your brisket to get ready for the next step? In the meantime, you can check out our article about 12 of the most popular Canadian foods that are a must-try.

After about 10 days, take the spice coated brisket out of the refrigerator. Rinse the brisket with cold running water and remove as much spice mixture from its surface as possible.

After rinsing the brisket, spray some coarse cracked black pepper and coarsely cracked coriander over the brisket’s surface. After spraying these, keep the brisket in the refrigerator for another 12 to 24 hours.

You can use pellet smokers or a kitchen-friendly stovetop smoker.

Again, refrigerate the brisket overnight for about 12-24 hours.

Put the brisket on a large enough steamer. Steam it for five to six hours. Wrap or coat the entire brisket in tin foil to try to keep the steam from escaping. Add more warm water as and when needed during the steaming process as a whole.

The final internal temperature should be around 190-200 degrees Fahrenheit.

You can feel how soft the final product is. It almost melts! For this reason, Montreal smoked meat is always cut with hands.

Don’t be disappointed to find that your smoked meat disintegrates into small pieces even when hand-cut. After all, it is tender!

You can use this delicious smoked meat in any way you like. One of the most famous dishes is the Montreal smoked meat sandwich.

You can chill any leftover meat. Just make sure to eat it within a week or so. If you’d like to freeze a portion of smoked meat, wrap it tightly in plastic wrap. After that, please put it in a freezer bag and vacuum seal it. If you do not have a vacuum sealer, be sure to squeeze out as much air as possible. You can freeze it for up to 3 months. 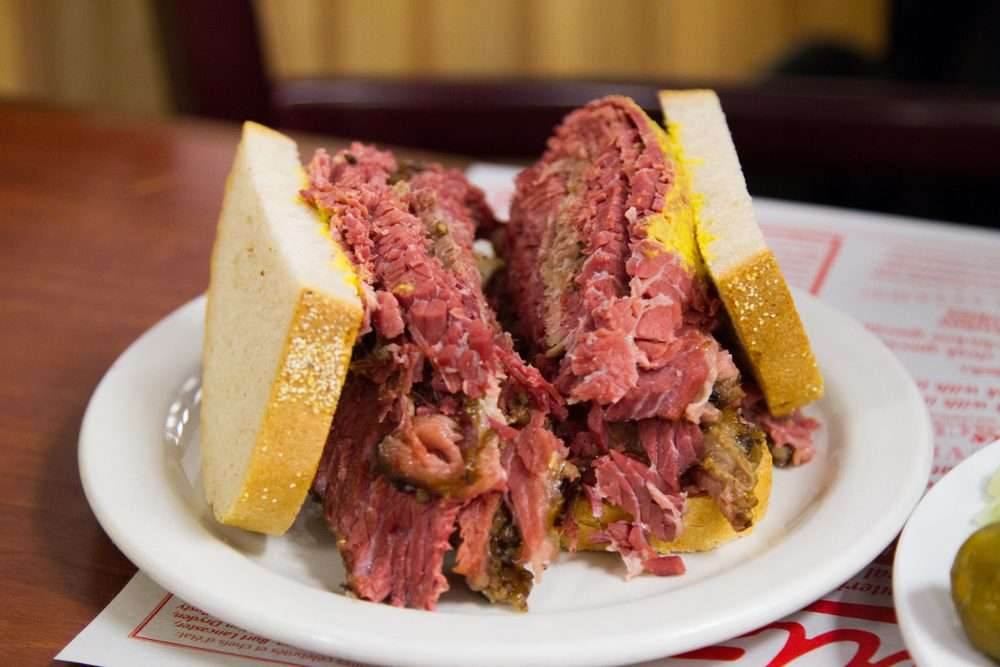 By: Davis Dorsey on Shutterstock

It is also quite popular to have Montreal smoked meat with French fries.

Generally, the customers are asked about the amount of fat they would like in their smoked meat in restaurants.

“Lean” refers to the lean and less flavourful end.

Medium and medium fat are the most popular cuts from the middle of the brisket.

Old-fashioned refers to the cut between medium and fatty.

Fat comes from the fat end of the brisket.

Speck is made solely of the spiced subcutaneous fat from the whole brisket without meat.

Restaurants like Snowdon Deli, Lester’s Deli, and Schwartz’s Deli serve some of the best-smoked meat sandwiches.

Montreal smoked meat is often compared to the famous New York Pastrami. Pastrami is a Romanian dish made from beef brisket. It was created as a way to store meat before the invention of refrigeration. Although the traditional cut of meat for making Pastrami is the beef plate, it is now common to make it from beef brisket.

Pastrami is used in the world-famous Pastrami sandwich. It is one of the USA’s favourite foods, known for its nuanced flavour.

Montreal Smoked Meat uses less or no sugar and is a dry cure, whereas Pastrami is generally brined. Also, Pastrami is dry-cured, while Montreal smoked meat is both dry-cured and then soaked to spread the seasoning.

Another point of difference between the two is that Montreal smoked meat is smoked for a longer period of time than the Pastrami, although both are steamed before sliced.

A serving of Montreal Smoked Meat contains about 1350 calories, including 84 gm of fats and 132 gm of protein.

You can find out more about the similarities and differences between the two here.

Tell us about your experience making this famous Montreal-style smoked meat and smoked meat sandwich in the comments!