The maple leaf symbol on the Canadian Flag is an important symbol that shows the legacy of Canada. The Maple Leaf was caught as a national symbol of Canada since 1868, and the tradition continues. You would also be amazed at the reasons and facts behind the Canada Provincial Flags.

These facts build the province’s reputation and what the history and culture of the province have to preach. Here are facts of Canada Provincial Flags, which will make you wonder how such small symbols and figures have to say so much.

1) Ontario Keeping Up With the Union Jack Photo by chris robert on Unsplash

The Union Jack has been the Flag of the U.K. for years. This symbol holds an important place in Canada too. In Canada, it is known as the Royal Union Flag.

The beautiful red Ontario flag features the Union Jack in the Canton. It also has the shield of the coat of arms of Ontario.

The coat of arms symbol reflects a red cross of St. George in the upper part, which represents England reflecting Ontario’s British Heritage. The shield has a Black Bear in its crest and Moose Dexter and Canadian Deer Sinister as supporters, all 3 being native to Canada. The lower portion of the Flag features three golden maple leaves.

The motto of the shield that is in Latin means “Loyal she began; Loyal she remains” in English. This shield being important to Ontario is featured on the Canada Provincial Flags of Ontario on a red ensign. The Flag depicts a modified version of the shield.

2) The Beauty of Fleur-de-lis in Quebec

Photo by Adrien Olichon on Unsplash

A white cross adopted from the Royal Flags of the Kingdom of France over a blue background and four white fleurs-de-lis in each quadrant separated by the cross is one of Canada’s provincial and territorial flags. This is the Quebec flag.

The white fleurs-de-lis symbolize purity in its most gracious form of Lily-flower inspired symbol. The blue field is for honoring the Virgin Mary. This Flag of Quebec has an official ratio of 2:3, but it is mostly seen in the 1:2 variants so that it matches with the national Flag of Canada when they fly together.

3) The Coat of Arms of Nova Scotia 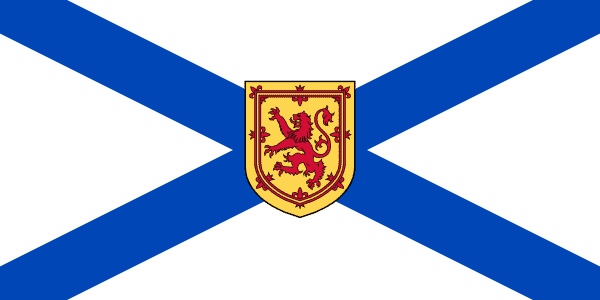 The coat of arms is a heraldic symbol representing the Nova Scotia Province of Canada, and its modified version is seen in the Canada provincial flags. In the arms of Canada, this is the oldest provincial achievement and is also the oldest British coat of arms that has been in use outside Great Britain. Isn’t it amazing?

This coat of arms is blazoned with an Argent, a saltire azure charged with an escutcheon of Scotland’s Royal Arms. These arms were granted by a 1625 King originally. In 1867, they fell out of use and were readopted in 1929 by King George 5.

There is a similarity between the Nova Scotia flag and the Scottish Flag. To your amazement, it is because Nova Scotia means New Scotland in Latin! This Flag has been in use since 1858, but it was recognized as the official provincial Flag only in 2013.

This design was adopted for its broad symbolism. The Flag is a mixture of blue, red, and white. The blue depicts waters of the sea, lakes, and rivers.

The red for human effort on building the society, the white for the snow and ice. It has a streak of golden to within it that reflects the confidence of the people of Newfoundland and Labrador.

5) The Provincial Arms of BC 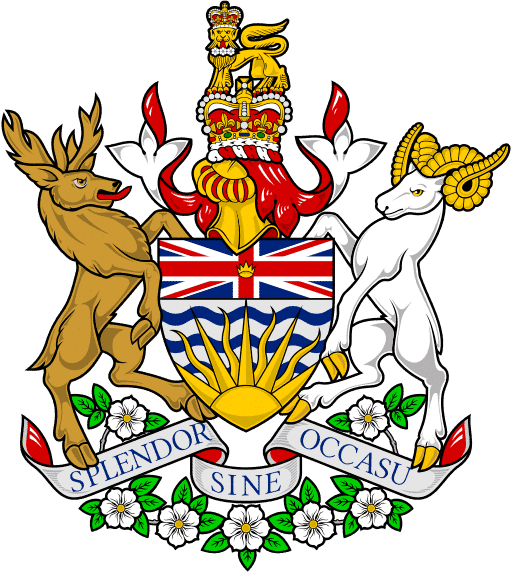 This is one of the very meaningful Canada Provincial Flags based on British Columbia’s Provincial Arms shield. The British Columbia flag can be divided into two portions, the top half and the bottom half. The Flag was adopted in 1960.

This depicts the location of the British Columbia Province that is at the western end of Canada. This sure makes us wonder about symbolism.

Behind the setting sun, there are three wavy blue lines and four wavy white ones. This pattern says that the location of B.C. province is between the Pacific Ocean and the Rocky Mountains. The sun reflects the province’s motto, i.e., “Beauty Without Diminish,” loosely translated as the sun that never sets. The Union Flag reflects the British Empire Heritage.

Know about The 10 Best Canadian Symbols.

6) The Red and White Bands 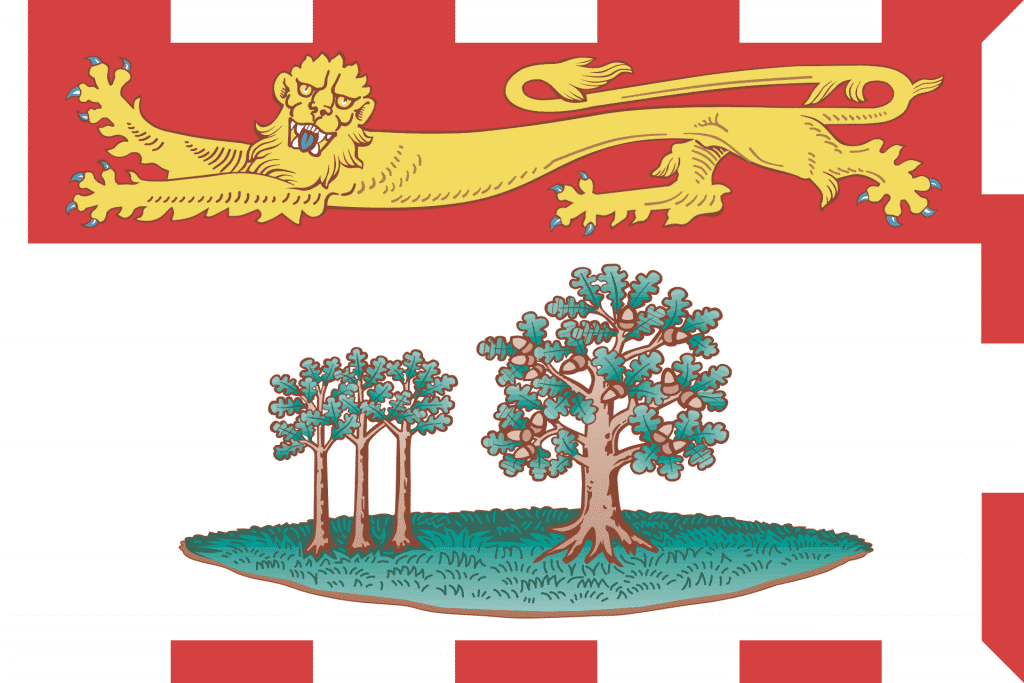 Below, the lion stands on a single plot of grass, representing the Islands of PEI and Great Britain. On the grass mound, a mature red oak tree stands tall. This is the official tree of Prince Edward Island, and it represents England. Beside this mature tree, there are three small saplings of the same oak tree.

These saplings on the left represent the three counties in which the Island has been separated since 1767. There are also red and white bands on the side, showing Canada’s official colors with pride. The factual symbolism among the Canada Provincial Flags is also highlighted in the Province’s motto, “the small under the great protection.”

7) The Golden Glory of Nunavut 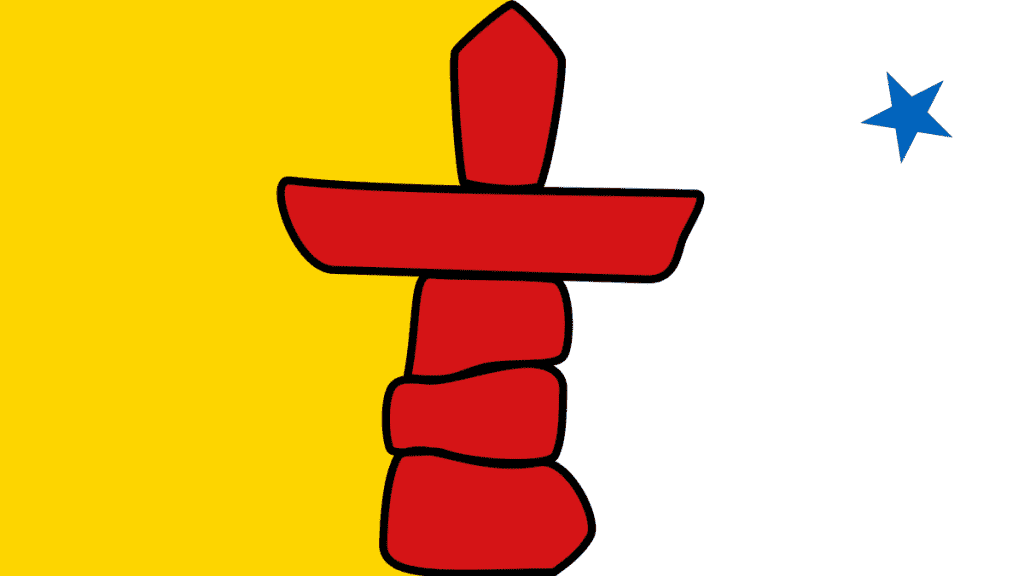 Proclaimed in 1999, the Canada Provincial Flags of Nunavut features a red inuksuk. The inuksuk is a traditional Inuit land marker symbol. Along with this traditional symbol of the historic Inuit community of Canada, the flag also represents the North Star, Niqirtsuituq. This blue star also symbolizes the leadership of the community elders.

The beautiful contrast of gold and white fields over the 9:16 proportion of the Flag, which is divided vertically with red inuksuk, depicts the riches of the land, sea, and sky with a blue star. The inuksuk is also a traditional monument made of stone that has been used to guide travelers since old times.

Get a quick view of the meaning of Canada Provincial Flags from this video.

8) The Distinctive Among the Canada Provincial Flags The stunning contrast of yellow, blue, and red in the Canada Provincial Flags of Brunswick is wonderful. The history and facts behind this Flag carry cultural, political, and regional meanings that are interesting. A gold lion starts from the top left corner, which is inspired by the Royal Arms of England and the coat of arms of Brunswick Duchy.

On the other side, there is a lymphad that occupies two-thirds of the bottom. This evokes the new shipbuilding industry of Brunswick that had been its history once. It is said that during the American Revolutionary War, shipbuilding was one was Brunswick’s dominant economic activities that started declining. The Flag, which was developed after, inspires and remembers the richness of that industry. 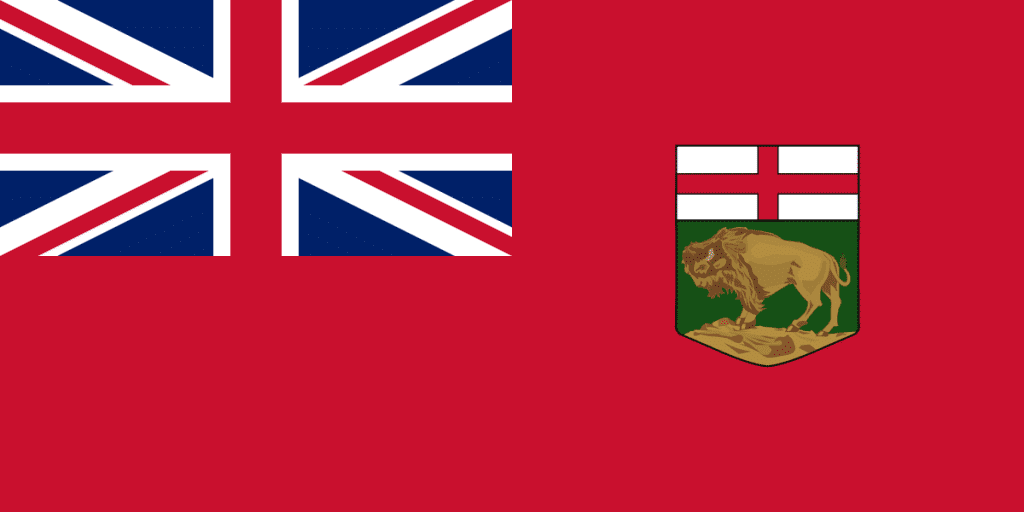 Manitoba’s Flag among the Canadian Provincial Flags emphasized the Canadian red ensign to maintain its legacy. The red ensign flag was an unofficial flag of the region for a long. The Flag of Manitoba has a lot of similarities with that of Ontario, hence confused a lot.

The basic difference between the Canadian Provincial flags of Manitoba and Ontario is that Manitoba’s Flag has the arms of the Hudson’s Bay Company. They utilized this symbol as Hudson’s Bay used to control Canada’s territory known as Manitoba (bounded on the north by the Northwest Territories) today. The arm has bison on it, which invokes the indigenous peoples as an integral part of their livelihood.

10) The Image of Natural Scenery 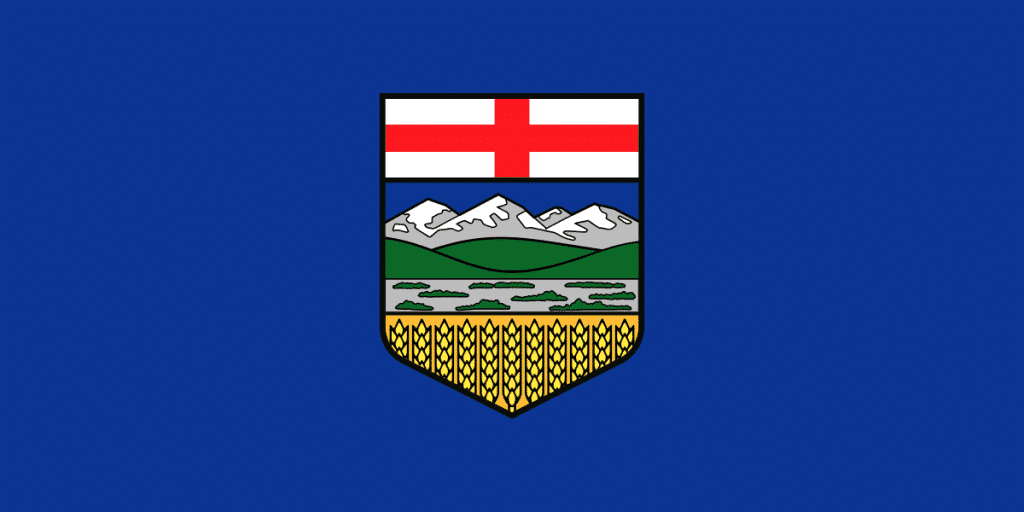 Whenever we are asked to draw natural scenery, we will draw two mountains with a river and a blue sky. The Alberta flag seems similar to this image. The Flag that Alberta has adopted is its official symbol too. The colors used for the Flag are blue and gold, which are also called “Alberta Blue” and “Alberta Gold” at times.

A fact to note for the provincial Flag of Alberta is its quality design. A survey conducted by the North American Vexillological Association ranked this Flag as 35th in quality of design. This ranking was given out of 72 Canadian Provinces, U.S. State, and the U.S. territorial flags.

If you are wondering about the coat of arms of each province and their significance, read this and get a clarified explanation about it.

These Canada Provincial Flags display gorgeous and colorful beauty when placed all together with the classic maple leaf flag. They are remembering history and culture and will keep inspiring generations of the provinces to keep the knowledge about their roots forever in their hearts.