Exploring the Beauty of Baffin Island

Baffin Island, the largest of Canada and the fifth-largest island of the world, is like a simile of beauty. It is separated from Greenland by the Baffin Bay on the north and the Davis Strait on the east. It is said to be the largest and most magnificent Island of the Arctic Archipelago. The island is so varied that you would find rugged mountains as well as the flattest lowlands of the Canadian Arctic.

On a geological basis, Baffin Island is known to be a continuation of Canadian Shield’s eastern edge. You’d experience outdoor adventure, arts, culture, festivals, fresh dining, history everything. Here, we explore the beauty and bewilderment of Baffin Island. You won’t be able to stop planning a holiday in mind while reading about this island. 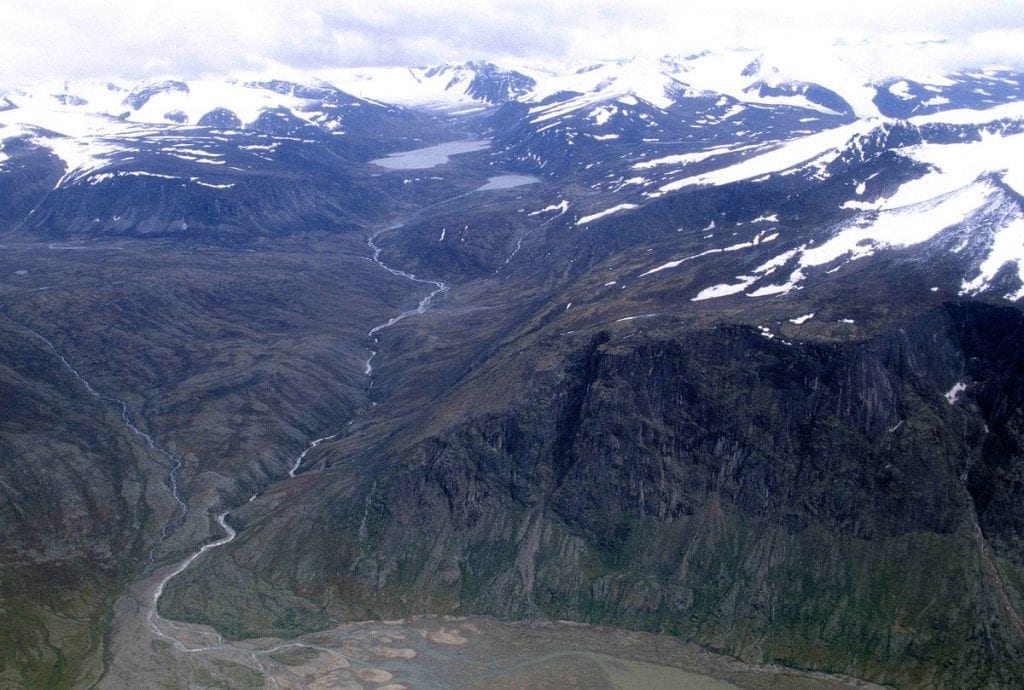 Though being a secluded and less discovered region, Baffin Island has been inhabited for over 3000 years. It is believed that the Pre-Dorset culture people established themselves in northern Baffin Island around 2000 BCE. The settlers after them were named the people of Dorset Culture as the physical evidence of their culture was found near Cape Dorset.

In present-day Canada, William Baffin was the first European to discover the Baffin Island. Hence, the name reflects. Located in the Canadian Territory of Nunavut, its highest settlement is in Iqaluit, having a population of 7740.

Located on the northern end of Frobisher Bay near Sylvia Grinnell River, the city of Iqaluit of Baffin Island is rich with traditional Inuit culture. This dynamic city is a political, business, journalism, and transportation hub of Nunavut. Iqaluit was formerly known as Frobisher Bay and today is a central attraction for many artists, musicians, filmmakers. The arts and culture festival during spring summertime brings artistic people here.

The meaning of Iqaluit is “Land of many Fish”. This beautiful city enjoys midnight sun in late June and July as the sun shines for 24 hours. During these months, you would see the magnificent twilight sky at midnight.

The city sky has surprises for you in the month of October to April. That is when you are likely to see the Northern Lights.

The direct ancestors of Inuit people, the Thule People, bred a revered type of dog that has been a resident of the region for 4000 years. Today you can indulge in dog sled activities, cross country skiing, canoeing, kayaking, kite skiing, tobogganing, river rafting, boating. In short, you will easily find something interesting for you.

The summertime is for breathing the scenic beauty by hiking, fishing, camping, and even go for berry picking. Talking about wildlife, you are to find large ravens all year round along with ptarmigans, snow buntings, seagulls, arctic hares, arctic foxes, and lemmings.

Caribou can be founded a bit farther. The seals can be seen from the town area when the sea ice breaks. Polar Bears are rare in this region, but you might get lucky. 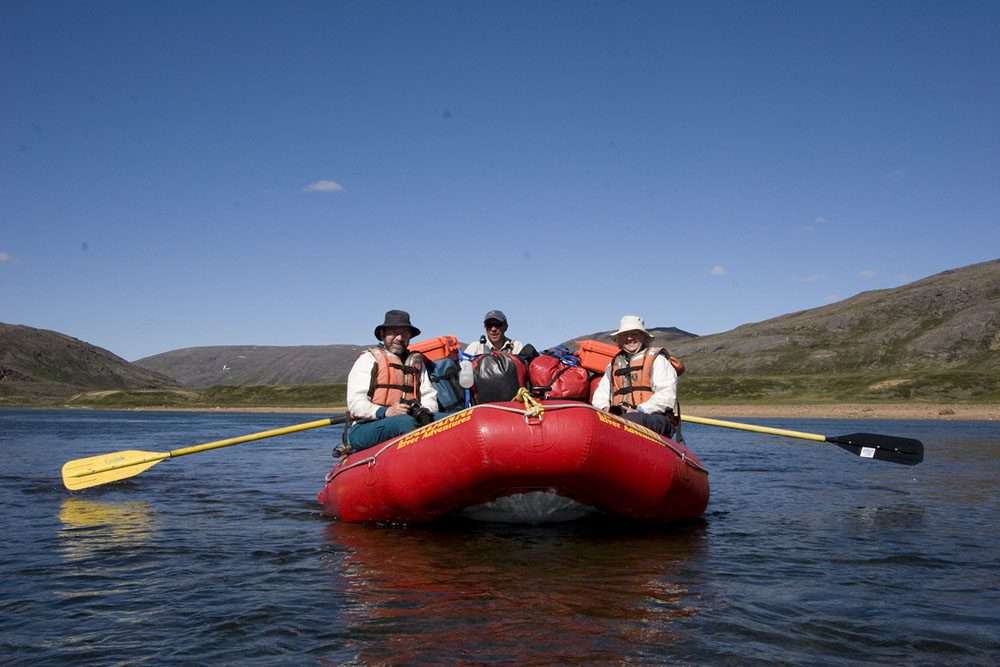 Iqaluit reflects a superb tradition of arts. There are several locations where you can purchase locally made carvings, prints, jewelry, finely sewn things, and clothing. There is an annual summer festival organized by the Nunavut Arts and Crafts Association to showcase the work of Nunavut Artists.

The Nunatta Sunakkutaangit Museum is home to an exquisite collection of local Inuit artifacts found over time. The museum has two popular festivals that reflect the cultural activities and performing arts of the Nunavut. One is the Toonik Tyme Festival, which is a spring festival wherein lots of traditional games, activities like Igloo building, dogsled races, snowmobile races, musical performances occur. The other is the Alianait Arts Festival in summer, where performing and visual artists work their magic.

Check out this amazing Baffin Island expedition video. It sure will give you chills. 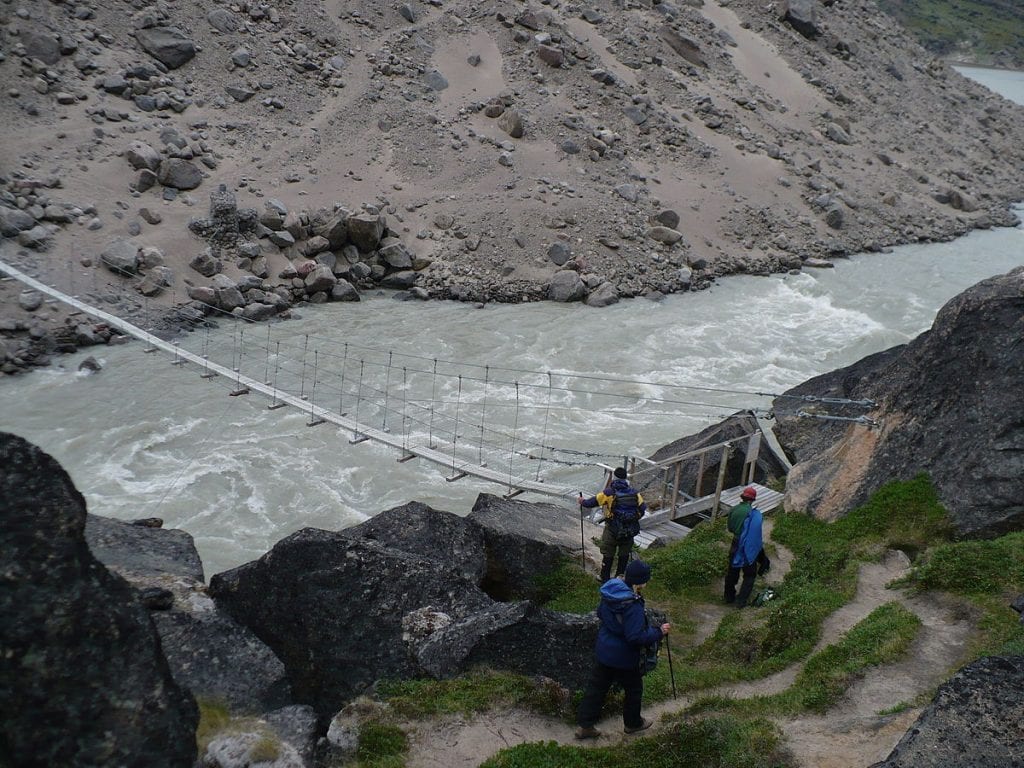 The activities at this park include backpacking through the well-known route i.e., Akshayuk Pass that follows the Weasel and Owl rivers. There are also a few hiking routes. You can snowshoe or ski through the route. 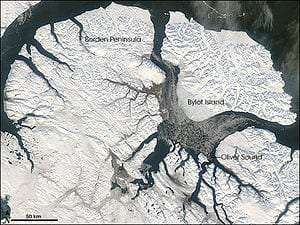 Among the most diverse areas of the Arctic, Sirmilik National Park attracts adventurers for wildlife viewing, skiing, climbing, hiking, sea kayaking, and visiting archaeological sites. Here, you can paddle among the seals and floating ice and keep your eyes perched for viewing narwhal and beluga whales.

Sirmilik means “place of glaciers.” As one of the Canadian Arctic Inuktitut speakers refereed the northwest passage of Baffin Island as Sirmilik, the region and the park were named so. This park is basically composed of three areas viz: Bylot Island, Oliver Sound, and Baffin Island’s Borden Peninsula.

Apart from other activities, you’re welcomed here as day-hikers to explore cultural sites and hoodoos. You can go on an Arctic Wildlife safari to the floe edge of Baffin Island. The Bylot Island is for hiking among glaciers and hoodoos.

Bylot Island is a distinct migratory bird sanctuary. Sea kayaks and snowmobiles are always a way to make your adventure more fun and lively. 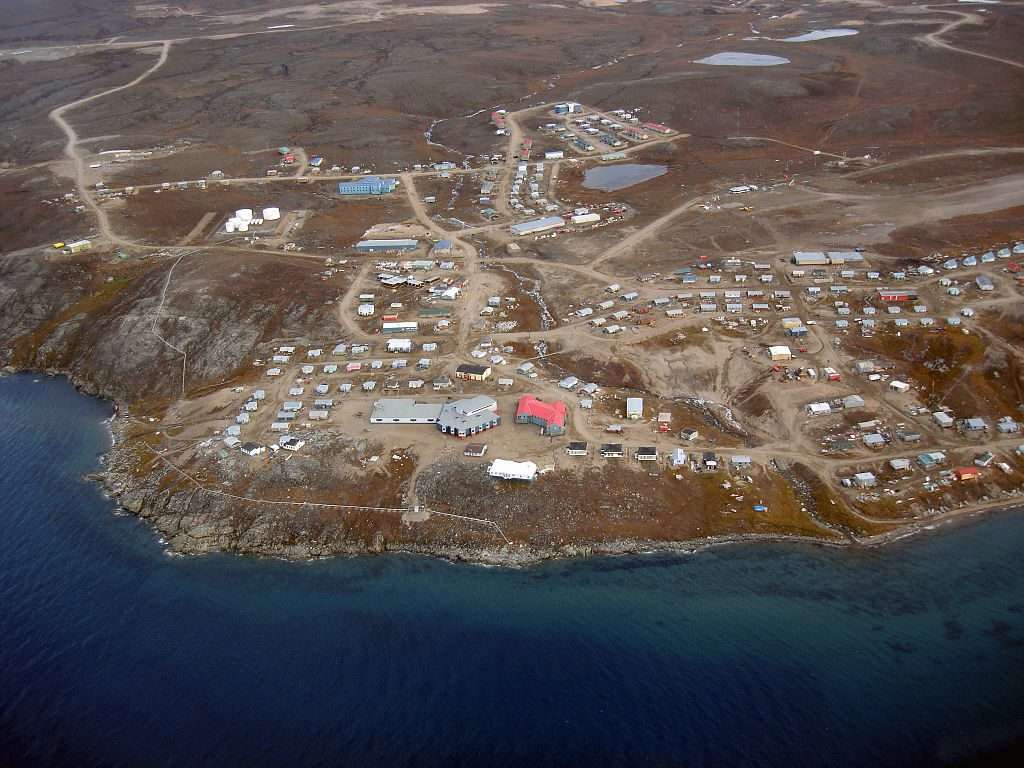 Also known as “Mittimatalik” with reference to an unknown ancient person buried here. Pond Inlet, located on the northern tip of Baffin Island, is a traditional Inuit community. The beautiful region overlooks the Eclipse Sound and mountains of Bylot Island. Being near to the scenic fjords, glaciers, and icebergs, Pond Inlet is known for large pods of the narwhal.

Mittimatalik is home to a renowned theatre group known as Tununiq Arsarniit. There are many ice caves, geological hoodoos, drifting icebergs on Pond Inlet.

The summers here are pretty relaxing, with 24 hours of sunshine from May to August. In the months of winter, there is no sunshine. The sky is full of starlight, moonlight, and Northern Lights.

The region is scattered with many archaeological sites of Dorset and Thule people, which peaks the interests of visitors. Here, you can explore ice caves and marvel at the hoodoos. Lots of wildlife species reside here, including the magical unicorns of the sea. Cross Country skiing and igloo camping are among some fun activities.

To get a glimpse of the Inuit Culture, see this short video clip and enjoy!

An Inuit Hamlet on Baffin Island, Pangnirtung, is located on a coastal plain of Pangnirtung Fjord. The name means “place of bull caribou” and is also nicknamed as Pang. This place is the southern community gateway to Auyuittuq National Park, and journeying through its landscapes is rather thrilling as it was the backdrop for the opening scene of James Bond thriller ‘The Spy Who Loved Me.’

Here you can also visit the Uqqurmiut Centre to get astonished at the work of famous artists. You can shop for sculptures, tapestries, lithographs, prints and don’t forget to get the famous ‘Pang Hats’. 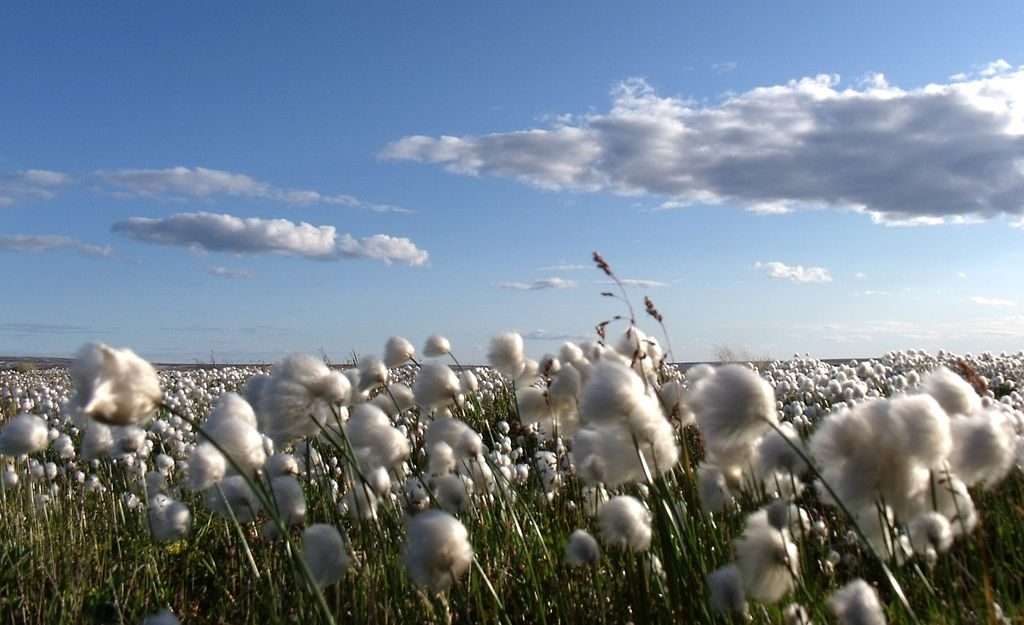 Mike Beauregard from Nunavut, Canada, CC BY 2.0, via Wikimedia Commons

A traditional and vibrant community located in the northwest corner of Baffin Island, Arctic Bay, is a safe harbor hamlet. It has been inhabited for 5000 years now by the people of nomadic arctic. This site is also known as ‘Ikpiarjuk’ meaning ‘The Pocket.’ This name refers to the fact that protective hills surround it on three sides.

At the time of the year, when seaways are open, tourists arrive on the High Arctic and Northwest Passage cruise ships. People wander around the Arctic Bay, taking in its sights, sounds, and local cuisines. You can come across many local artists and acquire carvings and handicrafts.

There are tons of migratory high arctic seabirds found here. Among them are thick-billed murres, snow geese, ivory gulls, Ross’s gulls who have their breeding grounds here in the vicinity.

Hiking, camping, and fishing are the most loved activities. 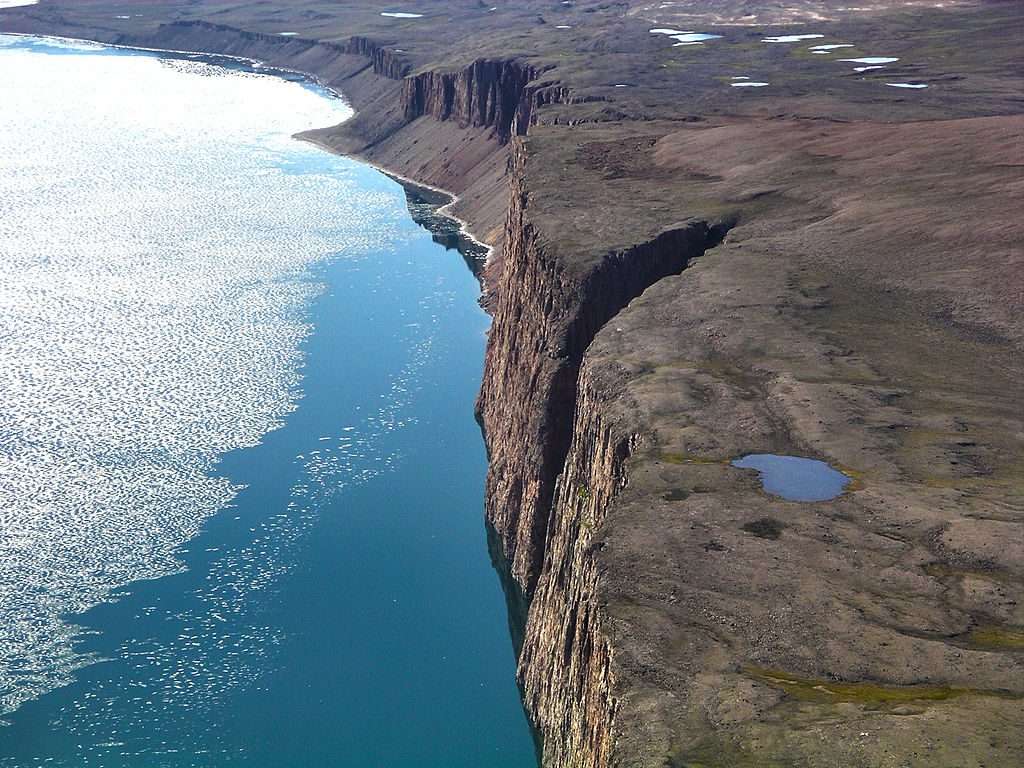 In arts, you can find high-quality marble cravings, ivory sculptures, fine crafts, and artwork made by the Arctic Bay artists. You can come here at any time in the year and dip into their culture along with arts and crafts.

Located on the shore of Baffin Island’s Patricia Bay that is an arm of Davis Strait, Clyde River is an Inuit Hamlet. Quluaq School serves the community of Clyde River, the Northern Stores, a community hall, an arena, a health center, an Anglican Church, and Clyde River Airport that has regular flights to Iqaluit and Pond Inlet.

Clyde River has another name, ‘Kangiqtugaapik’. The rock and ice climbing enthusiasts are attracted to the mountains, glaciers, and icebergs. One of the very loved and popular recreational activities here is the exploration of scenic landscapes by snowmobile during winter and by ATV during summer.

There are seasonal activities like dog sledding and boating along with excursions to flow edge. Along the year, there are many community celebrations and feasts organized on special days and holidays. There are hunting activities in this region.

In the fall, hunters pursue narwhal in Patricia Bay and the October month is for the annual polar bear hunt. There are many small games available for hunter’s whole year. 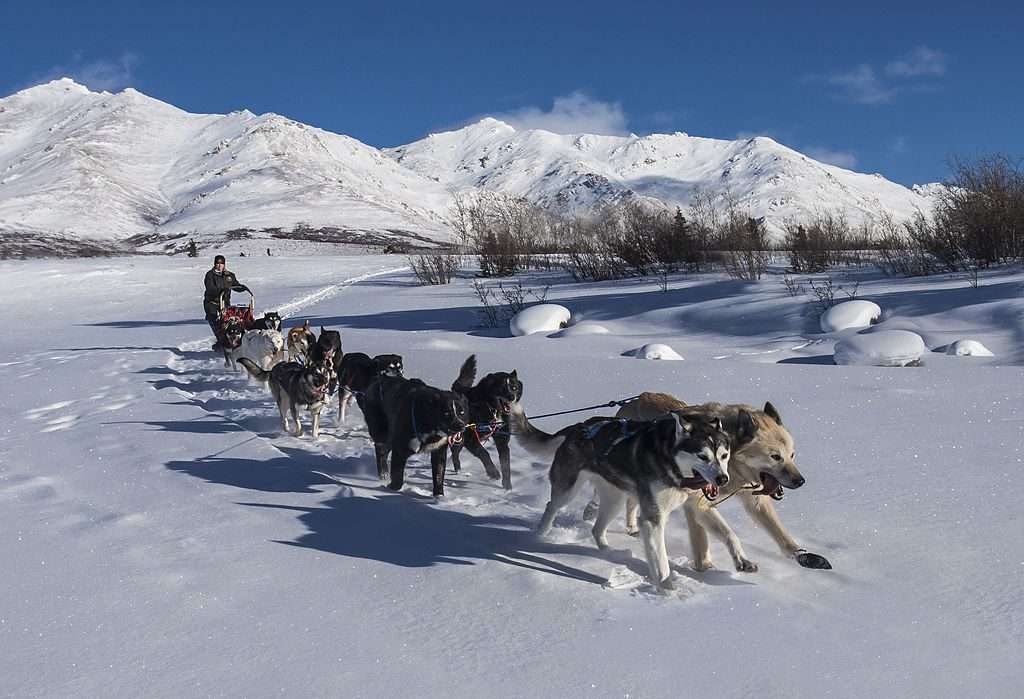 Kangiqtugaapik is considered as the artistic center of the Inuit Community’s whalebone carving. Stone sculptures are created here from distinctive light green stone found north of Clyde River. You can have a great time here, along with the community people.

This territorial park is a surprisingly fertile arctic oasis in the middle of Southern Baffin Island. The Soper Heritage River Valley and 120 Km of Itijjagiaq Trail are located inside the park. The boundaries of the park follow a series of rivers, lakes, and hills.

The Soper River had been designated as the Canadian Heritage River in 1992 for its cultural significance and natural beauty. The river, along its course, drifts into many tributaries and streams flowing down the valley. There are countless cascades happening which echo the meaning and theme of the park Katannilik ‘the Place of Waterfalls.’ 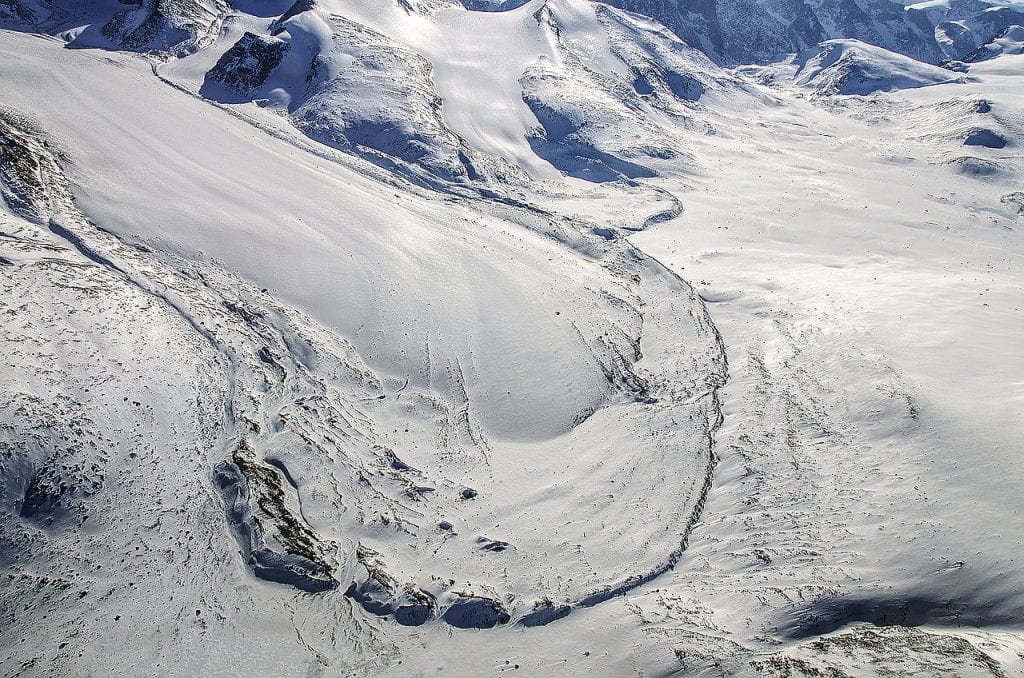 This beautiful ice cap of 6000-kilometer square is located in the Auyuittuq National Park of Baffin Island. This ice cap is the remnant of the last ice age. It has been named after a whaling captain William Penny who pioneered over-wintering with Inuit locals to start whaling earlier in the season.

On the west coast of Baffin Island lies this beautiful Migratory Bird Sanctuary, Dewey Soper. This is a Ramsar-designated wetland and is of international importance. The sanctuary supports 30% of the breeding geese in Canada.

Up to 2 million of birds flock to the region at the time of summer nesting. Wouldn’t it be magical to visit the region during this time?

Kimmirut is a community located on the shore of Hudson Strait on Baffin Island. This community is named Kimmirut for a very distinct rocky outcrop known as ‘the heel’ to the locals. The landmark ‘heel’ stands 60 meters across the water.

This region is home to scrimshaw ivory, serpentine, soapstone, and marble carving gallery. The people here are very welcoming and live a traditional lifestyle.

Apex is another small community of Baffin Island. The trail of Apex is very beautiful and filled with wildflowers. The trail is perfect for hiking, walking, nature trips, and camping. You can visit.

There is also Apex Hill and Apex Beach. You can enjoy the wonders of this region, along with a little group.

Baffin Island has a never-ending list of places and spots to awestruck you. There are many other hamlets and communities which welcome the tourists happily. With such zealous people, you feel one of them. Whether it is to bathe in the midnight sun or look at the Northern Lights, Baffin Island is at least once a lifetime destination for everyone.