Labelled the “tall tree capital of Canada”, Port Renfrew is one of the best-kept secrets of the province of British Columbia. It is a nature lover’s paradise and can be found on the south shore of the Port of San Juan, which is a small inlet on the western coast of the more popular Vancouver Island.

The province of British Columbia has been given the title of one of the best places in the world to reside in. With so many places to explore around the province, how can it be anything but fascinating? Much like the Salt Spring Islands, Port Renfrew is one of the best places to get away from the world and enjoy the west coast experience. Let’s take an in-depth look at all the ways that you can explore this hidden gem!

The tidal pools are the most attractive feature of the Botanical Beach Provincial Park. They can only be found during the low tide, so be sure to check up on the tide tables to make sure that you land in the area when the sea retreats. Sometimes, the low tide can fall during times of the day when it is not possible to explore a beach. One of those times is the middle of the night.

The tidepools formed on the beach are made of sandstone. Some of the tide pools are made by the crushing of the landform due to the movement of boulders by the high tide.

Photo by James Wheeler on Unsplash

Plenty of species of animals and plants can be found at the shore. This part of Port Renfrew has some of the most adaptable flora and fauna in the region.

In this region, please careful when you’re around the tidepools because the rocks at the beach are very slippery. Make sure you wear appropriate footwear to prevent injuries and mishaps. Another thing to be wary of when you’re at the coast is to respect all life forms. Don’t disturb anything in the tidepools. Live and let live, yes?

Botanical Beach is not too far from Port Renfrew. There are parking lots available at the park, so try to avoid leaving your vehicle on the edge of a road.

Arguably the most recommended way of exploring Port Renfrew is to embark on a Big Tree Tour. The mastermind behind the idea of a tour of the biggest trees in the area is TJ  Watt, a renowned conservationist and big-tree hunter.

You will be accompanied on the tour by TJ Watt himself. He is one of the most knowledgable people in the world when it comes to trees, especially in Port Renfrew, and is also a very fun person to go on a tour of the forest with.

TJ Watts and Ancient Forest Alliance provide you with one of the most educational and in-depth tours of the forest at Port Renfrew that will open your eyes to the need for conservation of trees and why they are so important for our survival, along with a lot of hidden gems. 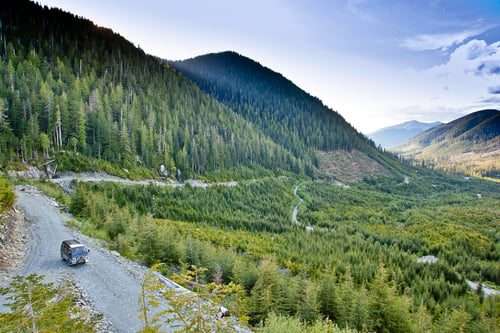 TJ is one of the safest workers to take a tour with, as he comes prepared with all sorts of equipment to ensure the safety of the guests.

It is highly recommended that you opt for the photo package at the Big Tree Tours. TJ is a great photographer as well and will click you shots among the old douglas fir trees that will last for a lifetime.

Do check out their website for reservations, rates and other in-depth information about the packages offered by Big Tree Tours.

The Juan de Fuca Trail is one of the most challenging hikes in all of Canada. The 47 kilometre stretch along the Pacific Ocean is an absolute escape from civilization, which is also one of the things that make the hike so challenging. The trail is located in a very isolated setting.

The Hiking Trail is found in the Juan de Fuca Provincial Park. The Marine trail is one of the highlights of the park along with the China Beach Campground, the China Beach day-use area and the Botanical Beach. Each of the main areas is accessible via cars and have parking lots for the convenience of the visitors.

The distance between the district of Sooke and Port Renfrew is about 35 km, separated by China Beach.

There are four main trailheads when we talk about the Juan de Fuca Trail, they are:

It will take you a few days to cover the entirety of the Juan de Fuca Trail, but many of the trailheads are smaller and are much easier to cover. It will also take you a lot less time to enjoy the entire area as well.

Photo by Eddie Lawhead on Unsplash

Much like the Botanical Beach Provincial Park, the Juan de Fuca Trail also has tidepools which can be slippery. Be careful around these areas as it is very easy to slip and get injured. Make sure your equipment and footwear are appropriate for the hike, as it might get really challenging during the high tide when the water washes over the rocks.

The 1,528 hectares of the park in Port Renfrew house some of the best scenery to check out in the area. You’ll come across hidden grottos in the area as well, along with waterfalls and old-growth forests.

One of the best sights that you will see during your hike along the Juan de Fuca Trail at Port Renfrew is the Olympic Mountains, coupled with a panoramic view of the coastline.

Check out the west coast trail as well, for a very similar, thrilling hike.

15 minutes away from Port Renfrew, you will find yourself in one of the most spectacular forests you have ever seen. The Avatar Grove is a 10-hectare area, full of old-growth douglas fir trees, western hemlock and western red cedars. It is another one of TJ Watt’s discoveries and falls under the Ancient Forest Alliance, which is handed the duty of protecting the old grove.

There are two different paths at the grove so make sure you have time in your hand when you come to visit the park. Another thing to keep in mind is that the road to here is very bumpy, so transit will take time and might even be a hassle. But that hassle is every bit worth it.

When you’re in the park, you will find the World’s Gnarliest Tree on the upper path of the trail. It is also a nice hiking experience, so make sure that you’re prepared for the challenge before committing to it.

The World’s Gnarliest Tree is actually a gigantic cedar tree, which has multiple burls on its bark which give it an extremely rugged appearance.

Port Renfrew is all for birdwatching, and this is one of the best places to go about it. Be sure to try it out if you’ve never had the experience before.

You’ll come across the Sombrio Beach if you come up north from the Juan de Fuca Trail and it’s one of the coolest places to explore throughout Port Renfrew. It is also quite popular among tourists, so make sure you pick a time when you would like to explore the coastline.

Although there isn’t anything inherently special about the beach, there is something extremely cool right around the corner. In other words, the beach itself is not the main attraction.

If you walk down to the beach from the parking lot and keep to the left, you’ll find yourself at the coastline. From here, it is a 20-minute walk to the hidden treasure.

Photo by Jasper Garratt on Unsplash

Once you’re at the right spot, pay attention to the trees. You’ll see an opening between them in the creek. Now go up the creek. It is a 100-metre walk, and the walls are only a few metres apart. At the end of the walk, you should come across a waterfall among the moss-covered walls of the canyon.

This is just another one of the many hidden treasures of Port Renfrew. If you don’t want to make the walk to the hidden waterfall, then you can enjoy yourself having a long stroll along the beach. It is very peaceful, either way.

Originating in the Seymour Valley in the east and ending its course in the San Juan Valley in Port San Juan, the San Juan River cuts across the Vancouver Island flowing from east to west. The settlement of Port Renfrew lies at the mouth of the river.

The San Juan River Estuary Ecological Reserve can be found 5 kilometres to the northeast of Port Renfrew. The reserve is thickly populated by some of the most varied species of plants and animals that can be found in the area. Namely, red alder, black cottonwood, Sitka spruce, and western hemlock which is in continuity with the Big Tree Tours. Shrubs found in the area include: salmonberry, stink currant, piggyback plants, lady fern, and deer fern.

The varied species of fauna that can be discovered in the ecological reserve are American black bears, Roosevelt elk, North American river otters, bald eagles, and minks.

Since black bears can be found in this area, visitors must be careful and are advised to carry bear spray along with them to ensure their safety in case they are attacked by a bear.

Fishing is one of the more popular things to do in Port Renfrew. It is also a great way to enjoy yourself while you’re here. Multiple reliable companies offer fishing charters in the area, three of which we will talk about in this section.

McKenna Sportfishing is run by Kevin McKenna. He is to McKenna Sportfishing what TJ Watts is to the Ancient Forest Alliance. You will be led through the fishing trip by either one of Bill or Kevin himself. Both of them are very friendly and possess an unreal amount of knowledge about the fish that can be found in the area, as well as about fish in general. The experience will leave you coming back for more, which just goes to show how good these people are at what they do. 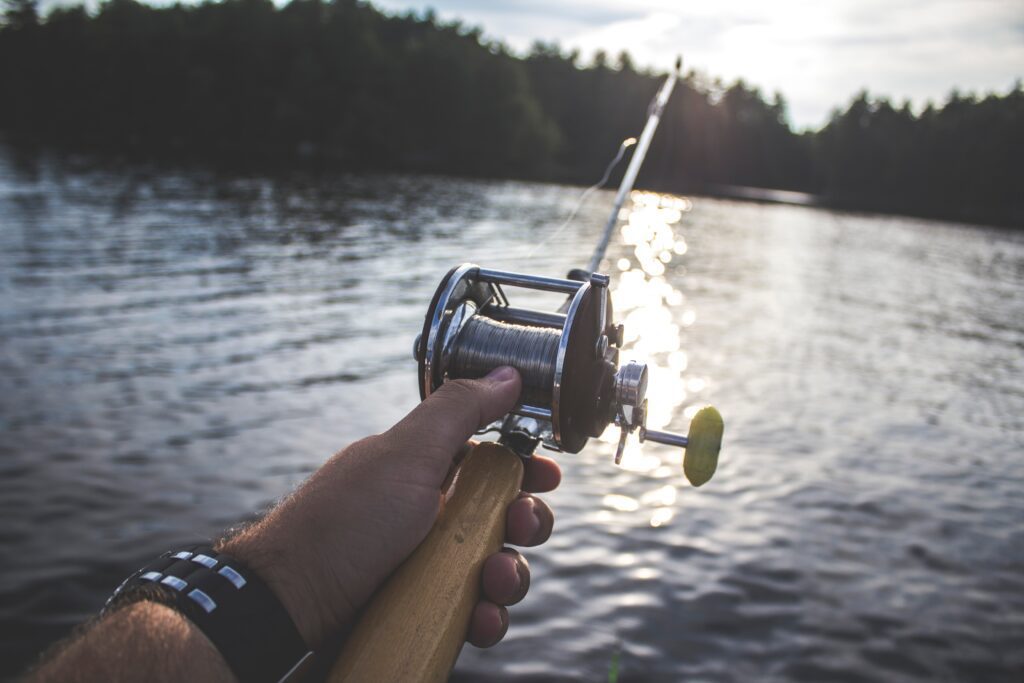 Photo by Brady Rogers on Unsplash

No Bananas Fishing Charters is another great fishing charter to help you have an amazing experience around the waters of Port Renfrew. The No Bananas Fishing Charter boat is led by Trevor, who always knows the right spot to land yourself a feisty one. Apart from that, he is a great person and is one of the best tour guides to come out of Port Renfrew.

Vicious Fishing Charters is the last entry on the list of great fishing charters in Port Renfrew. That is not to say the other services are poor, it is just that these three are exceptional and are the best at what they do in the area. The Vicious Fishing Charters have two boats, led by Captain Des Hatchard. Much like the two companies mentioned above, vicious is also one of the best in the area and you would be investing in amazing memories by choosing any of the three companies above.

One thing that you must keep in mind while making reservations is that you have to be early. The fishing charters are arguably the most thrilling experience around Port Renfrew, which means that the bookings sell out quickly!

Port Renfrew is the place to be if you want the best out of the West Coast of Vancouver Island. The western end of Highway 14 is where Port Renfrew is located, and it is one of the more accessible getaways in the province of British Columbia. Be sure to give it a shot if you’re in the area!