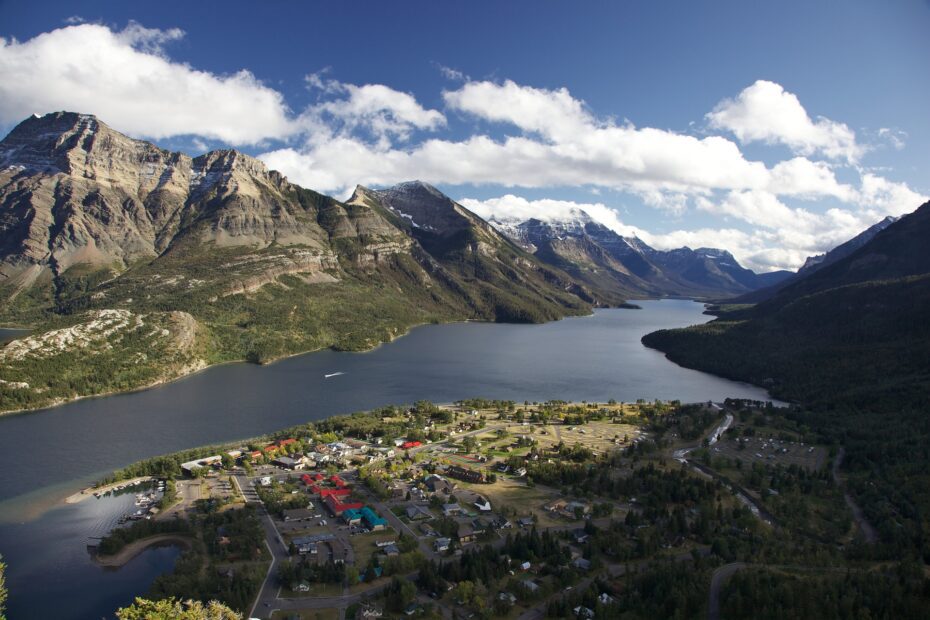 Waterton Lakes National Park is one of the famous national parks of Canada. The national park is popular for its wildlife and incredible views of nature. The place is also famous for its fun and adventurous activities like hiking, camping, horseback riding, boat tours, and many more.

Photo by Chavdar Lungov from Pexels

Waterton Lakes National Park is located in the southern part of Alberta province. It shares its boundary with Montana’s Glacier National Park.

The Waterton National park is one of the first four national parks in Canada. The National Park, established in 1895, was named after Waterton Lake, and Waterton lake was named after Victorian naturalist and conservationist Charles Waterton. Its range extends from the Canadian Rockies to the prairies. Rugged mountains and wilderness cover 505 km2 (195 sq mi) in this park.

Waterton Lakes National Park is divided into four ecoregions: parkland in the foothills, montane, subalpine, and alpine. Waterton is Canada’s only National Park containing the foothills parkland ecoregion, covering about 10% of the park and stretching from Calgary to Waterton and into some regions of the United States.

Photo by Janko Ferlic from Pexels

The park is classified as the UNESCO World Heritage Site for its unique location, physiographic region, junction of mountains and prairies, triple peak divide. These locations of the park are picturesque, with rare wildlife and an ecosystem.

Though there are no glaciers left in Waterton, few areas in Waterton still have everlasting snow. Many glacial troughs, hanging valleys, the ridge, the cirque, the kame, and the esker can be found in the park. The Cameron and Blakiston rivers have built two alluvial fans near their mouths since the last ice age.

Image by JoeBreuer from Pixabay

The Prince of Wales Hotel is one of Canada’s notable railway hotels. The hotel was built by the Great Northern Railway of the United States near Upper Waterton Lakes between 1926 and 1927. It was an attempt to lure American tourists during the prohibition era in the United States. Wales hotel first opened in July 1927 and is Canada’s first great railway hotel built by an American railway firm.

Image by PDPhotos from Pixabay

The Bar U Ranch National Historic Site in Longview, Alberta, is a conserved ranch. It was once one of Canada’s most successful ranching operations. The Bar U Ranch spanned 65,000 hectares at its peak, with 30,000 cattle and 1000 Percheron horses. The Big Four included two proprietors who were essential in the founding of the Calgary Stampede.

Waterton Lakes National Park is accessible all year, but July and August are the busiest tourist months. The park’s only commercial facilities are at the Waterton Park townsite. The park’s height varies from the townsite at 1,290 meters (4,232 feet) to Mount Blakiston at 2,910 meters (9,547 feet). It has several beautiful paths, including the Crypt Lake trek.

Things To Do In And Around Waterton Lakes National Park

Photo by Dorothy Castillo from Pexels

A Hike to Bear humps is one of the highly recommended activities in Waterton Lakes National Park. The hike to Bear Humps is about 1.8 miles long. You will need at least one and a half hours to complete your hiking.

The boat tour at Waterton lakes is one of the best things to do in the park. The cruise is a 2-hour trip, where you will cross the U.S. and Canada border. The guide will impart some facts about the Waterton Lakes National Park and International Peace Park during the tour. The boat tour is offered from the last week of June to the last week of August.

You can rent a mountain bike from the shop nearby the gas station in Waterton town. The shop will provide you with a mountain bike, map, and some basic information about trails.

Explore Waterton Lakes National Park with a bicycle. Rent bikes in the city and ride on one of the various picturesque lanes that cross the park. There are many parkways and trails where you ride your bikes smoothly and explore the flora and fauna of the park.

Waterton Lakes National Park is one of the most appreciated places to camp in Canada since the area is one of the stunning places to set up a tent. It is a utopia for campers with beautiful landscapes. Various campsites offer several accommodations.

Things To Remember While Camping:

Photo by Jeff Stapleton from Pexels

It’s also important to remember that for the duration of your camping excursion in Waterton, you’ll need a valid camping permit and a Parks Canada pass. Before you set up camp, you must register your permission, and fire permits are necessary for each night you have a fire. The National Parks website has all of the information about costs in Waterton Lakes National Park.

The National Park is also a natural habitat for grizzly and black bears. Although it is unlikely you will have a violent bear encounter, you must be prepared for unfortunate situations. If you spot a bear, don’t get close to a bear to click a picture or, to adore it. If a bear tries to get close to you, spray the bear spray or play dead. Don’t make eye contact with the bear; it might take it as a challenge and attack you. (For more precautions, visit the Waterton Park website.)

Image by Snapwire from Pexels

This day-use campsite area is located on Blakiston Creek, just off Entrance Road. Many people enjoy this spot because of the soothing sounds and its accessibility. You can easily spend your precious time adoring the breathtaking views of Mt. Galwey.

You can sit by the fireplace in winter and enjoy the warmth. This campsite is Waterton’s only campsite where you can stay overnight in winter and, it’s a lovely place to spend the night after enjoying one of the park’s many winter activities.

The campsite is only available through reservations.

This campsite is located on the outskirts of Waterton, offers 90 water, sewer, and electrical sites, accessible, unserviced, and walk-in tent sites.

The place has proper toilets, food storage facilities, and kitchen shelters at the campground. This open campground, which faces Upper Waterton Lake, is exposed to breezes and is ideal for recreational vehicles or people who want to be close to the town’s facilities.

Crooked Creek Campground is located 3.4 miles eastside of the Waterton National Park. It offers 95 serviced campsites, 30 and 50 back-in to the visiting public.

The campground is open from mid-May to early September, but the opening is dependent on the weather. Parks Canada maintains the Crandell Mountain campground.

The picturesque Blakiston Valley is located along the Red Rock Parkway. It has 129 unserviced campsites that are provided on a first-come, first-served basis. Crandell Mountain Campground has five traditional tipis available (for a charge) from late June to September 6. (weather dependent). For further information, go to Parks Canada’s website.

Backcountry camping at Waterton Lakes National Park is a fantastic way to explore the park and lose oneself in its surroundings. While backcountry camping requires more effort than a drive-up campground, it is well worth it for individuals who enjoy being outside and want a raw, authentic experience.

It’s worth noting that the backcountry Waterton campgrounds aren’t reachable by road and must be reached by hiking paths. It means you’ll need to be able to carry all of your goods comfortably as you make your way to your wilderness campsite.

9 Out 10 Campsites have all the facilities like tent pads, an outhouse, and picnic tables.

The 10 Backcountry campsites are:

Before heading out to either of these Waterton camping spots, make sure you’ve read up on backcountry camping since you’ll need to take extra precautions concerning water purification, food, clothes, and so on. You must make reservation 90 days before visiting any campsites. Visit Waterton Lakes National Park website to know more.

Belly River Campground is the most remote of the three campgrounds in Waterton National Park, with 24 well-treed basic campsites for both RVs and tents. Dry toilets, cooking shelters, food storage, picnic tables, and fire pits are among the amenities available. When purchasing a fire permit, you can get firewood. There is no other source of water than the Belly River.

Waterton Lakes National Park is filled with exciting activities and experiences like hiking and exploring the national park with mountain bikes. But camping is the most treasured experience of all. Camping allows you to stay in this beautiful Waterton Park and enjoy every activity of your choice. Visit Waterton Park not because we are telling you to but to experience the beauty of mother nature in its purest form.