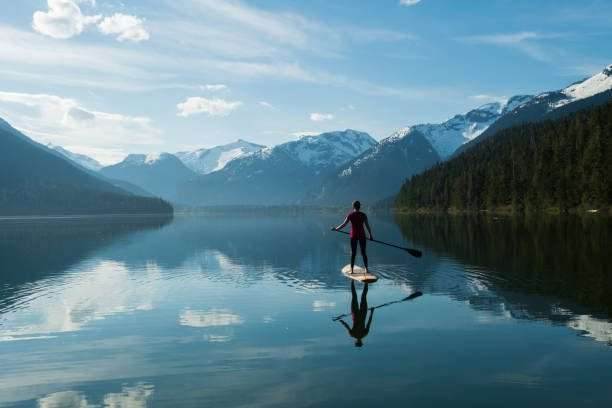 Wondering what makes Canada so beautiful? Are you curious about all those beautiful and amazing landscapes present in the country of Canada? Are you not aware of the physical geography of Canada? Please keep reading to know all about it.

Canada is the second-largest country, next to Russia, in this world. Canada has the largest portion of the world’s freshwater lakes. Canada also possesses the longest coastline on earth. Since the last glacial period ended, Canada has owned eight distinct forest regions. These are the basis of what creates Canada such a beautiful landscape.

The Great Lakes and Saint Lawrence basin sections are some of the richest sedimentary planes in Canada. Before the 20th century Eastern Great Lakes lowland covered a massive portion of mixed forest area based on plain land, between the Canadian Shield and the Appalachian Mountain. This area of Canada consists of one of the largest estuaries globally, the estuary of Saint Lawrence. Two notable batholiths situated around the regular line around this area, Montreal’s Mount Royal and Mont Saint-Hilaire, are known for the great richness in precious minerals.

The Arctic comprises the northernmost mountain system on earth. Most of the portion of the Canadian Arctic consists of endless permafrost and tree line of Tundra North. The Hudson Bay and Arctic lowlands contain a substantial area of Canada’s geography, the Canadian Shield. The Arctic comprises everything, not in the tree line, which surrounds the top portion of Nunavut and the northernmost parts of Northwest Territories, Yukon, Manitoba, Quebec, Labrador, and Ontario.

Western or Canadian Cordillera are be bounded by the Rocky Mountains in the east and the Pacific Ocean in the west.

Canadian Interior Plain is a large sedimentary plain covering southwestern Manitoba, southern Saskatchewan, and Alberta. It even comprises regions between the Great Slave and the Rocky Mountain and lakes of Great Bear in Northwestern’s territory.

Canadian shield is a massive rock in which the North-Eastern part of Alberta, northern portion of Ontario, Manitoba, Quebec and Saskatchewan, entire Great Northern Peninsula of Newfoundland, Labrador, most of Nunavut’s mainland and the Arctic Archipelago, Baffin land, certain significant bands through Southampton, Devon, Somerset, and Ellesmere Islands.

Above, there are six physical geographic factors based on which Canada is settled. Now let’s read about some amazing Canadian landscapes and what makes them amazing.

Banff is situated in Banff National Park, which is in Alberta, Canada. Banff has the second-highest elevation in Alberta, next to Lake Louise. It is a resort town and one of the most popular tourist destinations in Canada.

Banff is surrounded by mountains, especially Mount Riddle, Mount Norquay, Cascade Mountain, and Sulphur Mountain. It is situated above Bow Falls. In nature, this area’s soil is calcareous (which means it is partially or entirely composed of calcium carbonate). They are poorly drained with textures like sandy loam and silty clay loam.

Apart from the mountains, there is Lake Minnewanka, about six minutes north of the town. It is a popular area for various activities like mountain biking, hiking, and fishing. Tunnel Mountain (formerly known as Sleeping Buffalo Mountain) is another attraction situated within the town. It is popular for a quick hike since it takes half an hour to reach the summit.

St. John’s is the largest city and the capital of the Canadian province of Newfoundland and Labrador. It is named after John the Baptist. It is one of North America’s oldest cities. This city has a rich history as the citizens took part in the American Revolutionary War, War of 1812, and French and Indian War. Italian inventor Sir Guglielmo Marconi got the transatlantic wireless signal, first in St. John’s.

St. John’s is situated nearby the vast coast of the Atlantic Ocean, Avalon Peninsula on the northeast, and Newfoundland in the southeast.

Jellybean Row House has some picturesque houses and all the history presented for you. You are not allowed to invade but are certainly allowed to sink in the beauty.

Cape Spear is the oldest living lighthouse. It has a unique architecture. It is situated 12 kilometers from the southeast of St. John’s at Route II.

The Ice Hotel (French translation: Hotel de Glace) is situated near Quebec City. It is the first and only authentic ice hotel in entire North America.

This hotel is situated on the first slopes of the beautiful Laurentian mountains in the Charles Bourg borough; the hotel is about 5 kilometers north of Quebec City.

It takes 50 workers and a month and a half to build this ice hotel. It comprises 500 tons of ice and 30,000 tons of snow; the walls are three feet thick. In 2001, it had only 11 double beds, but now it has 51 double beds. The bathrooms are situated in separate structures since it is heated. This hotel is open during January, February, and March.

You can explore the beautiful Grand Hall, ice slides, chapel, rooms, and suites. You can finish exploring this exceedingly beautiful hotel at the ice bar with a glass of cocktail, served in a glass created by ice.

Mount Asgard is situated in Auyuittuq National Park, on the peninsula of Cumberland, Baffin Island, Nunavut, Canada. It is named after the realm of gods in the mythology of the Norse. It is a twin-peaked and flat-topped mountain and is merged by a saddle in the middle, which separates their flat tops. Mount Asgard is perhaps the most known among the Baffin Mountains.

It is tough for the climbers to reach the top of the mountain. The location looks even more beautiful because of the snow-covered peak.

The famous James Bond movie ‘The Spy Who Loved Me’ was shot there, and to reach the peak, the crew had to take the help of a helicopter.

Moraine Lake is located in the Ten Peaks village, at an elevation of about 6,181 feet. It is a glacially-fed lake located in the beautiful Banff National Park, about 14 kilometers outside Lake Louise, Alberta.

When the lake is full, it reflects an exceedingly beautiful shade of azure blue. It is the refraction of the light of the rock floor created by the surrounding glaciers. This lake is surrounded by majestic mountains, making this place a lot more than beautiful.

The perfect duration to visit Moraine Lake is from late June to August because, during this time, the weather remains warm, and you will be able to see the beautiful color of the lake. Lake Louise is about a 15-minute drive apart so that you can visit both lakes in a single day.

Niagara Falls is the border between New York, the United States, and Ontario, Canada. It is a group of three waterfalls. The largest one is Horseshoe Falls, also called Canadian Falls, American Falls, and Bridal Veil Falls lies within the province of the United States.

Most visitors come during the summer because, during that time, Niagara Falls becomes both a daytime and evening attraction.

Just hop on a Maid of the Mist to explore the beauty of the falls.

If you love nature, this Botanical Garden is a must-visit for you.

If you love history and are into books, visit this fort; it will not disappoint you.

4. Journey Behind the Falls

This is probably the most exotic view because you will get to view this beautiful waterfall from behind.

Since you have seen the falls from behind and below, now we can view them from above.

Niagara Falls View Casino Resort and Casino Niagara are two casinos on the Canadian side of the falls.

It is a mountain lake in the North and south of Montana, the United States, and Alberta, Canada. This lake is a composition of two water bodies, merged by a shallow channel locally called Bosporus. The lake’s northern and lower end is in Waterton Lakes National Park, and the southern and upper part of the lake is in Glacier National Park.

The Waterton biosphere reserve was established in 1979 by UNESCO to protect various habitats, including freshwater Fens, Alpine Tundra, Aspen Parkland, grasslands, and sub-Alpine forest that surround the entire lake.

Quartier du Petit Champlain is a commercial zone situated in Quebec City, Quebec. It is situated in the neighborhood of Vieux – Quebec – Cap – Blanc – Colline Parlementaire near Notre – Dame – Des – Victories Church. It claims to be the oldest commercial district in North America.

Main Attractions:
Rue du Petit Champlain mural, painted on the side of 102 rue du Petit – Champlain, a Trompe – l’oiel (an art technique for creating an optical illusion with realistic imagery).
Breakneck Stairs or Breakneck Steps is the oldest stairway of Quebec City, established in 1635. They were originally called Champlain Stairs, Beggar’s Stairs, and Lower Town Stairs.

Haffner Creek is near Lake Louise, Alberta. It is an out and back trail of about 17.9 kilometers. It is in a deep canyon, about 40 minutes in the southwest direction of Canmore. The national parks offer you amazing rock cliffs and icefalls that you can climb and explore.

In Bow Valley, Haffner Creek is one of the most popular ice climbing crates. Even when the sun is up, the icebox effect keeps the Haffner Creek in good shape. This place is very beneficial for beginners who want to practice steeper ice climbing and learn steep ice techniques.

Other attractions of the National Park include the Snocoach tours of Athabasca glacier, Marmot Basin ski ground, Athabasca Falls, outlet Glacier of Columbia icefield, Jasper Skytram, and various other activities to enjoy such as hiking, fishing, camping, rafting, and wildlife viewing.

Peyto Lake is a glacier-fed water body situated in Banff National Park in the Canadian Rockies. Peyto Lake is located near the Icefields Parkway. This lake is named after a trail guide and trapper, Bill Peyto, formed between two peaks, Caldron Peak, Peyto Peak, and Mount Jimmy Simpson, in Waputnik Range.

In the summer, a good amount of glacial rock floor flow under the lake from the nearby glacier, and these rocks particles give the lake a rare turquoise color.

Peyto lake is best seen from the Bow Summit, the highest point on the icefields parkway. Peyto lake gets everything from Peyto Creek, which provides water from Caldron Lake and Peyto Glacier. (which is a part of Wapta icefield).

These are some physical geographic factors and landscapes of Canada, making Canada an exceedingly beautiful landscape. 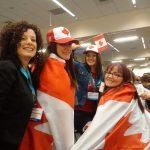 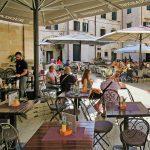 A Guide To 10 Delicious Banff Restaurants!
Leave a comment