Are you aware of the interesting things about British Columbia?

This Canadian province has its location between the Pacific Ocean and the Rugged Mountains.

Lying along the Pacific Ocean, British Columbia is known worldwide for its admirable natural beauty.

The place is truly a heaven on earth for nature and adventure lovers. Most of the cities are like a doorstep to the wild, waiting for you to explore. There are endless things to see and explore that might even awaken your deep-rooted daredevil spirit. And the vibrant environment fills every visitor’s soul.

British Columbia offers you the absolute best of everything from mighty mountain ranges and golden sandy beaches to old-growth rainforests.

Their culture, traditions, nature, people, and environment is so overwhelming. There’s no better time and reason to fall in love with amazingly gorgeous British Columbia. Citizens or visitors, everyone seem to enjoy the weather too.

The weather is mildly oceanic around Vancouver, as it receives 178 days of rain per year. Thereby, it is also commonly known as the “rainy province” of Canada.

This article will take you through some of the best interesting things about British Columbia.

Below we are listing the top 7 interesting things about British Columbia that one should know.

We all know Canada is big, but do we know how big British Columbia is? 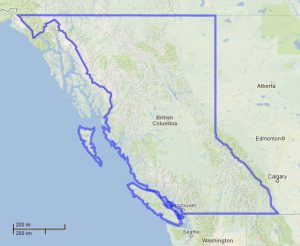 British Columbia is vast. It’s even bigger than most of the US states and is nearly four times the size of Great Britain (United Kingdom).

British Columbia is the third largest province in Canada. It is still as vast as all of France, the United Kingdom, Denmark, and Kuwait merged together. Imagine if it were the first largest or second-largest, how vast it would have been?

It is also one of the largest regions of North America. 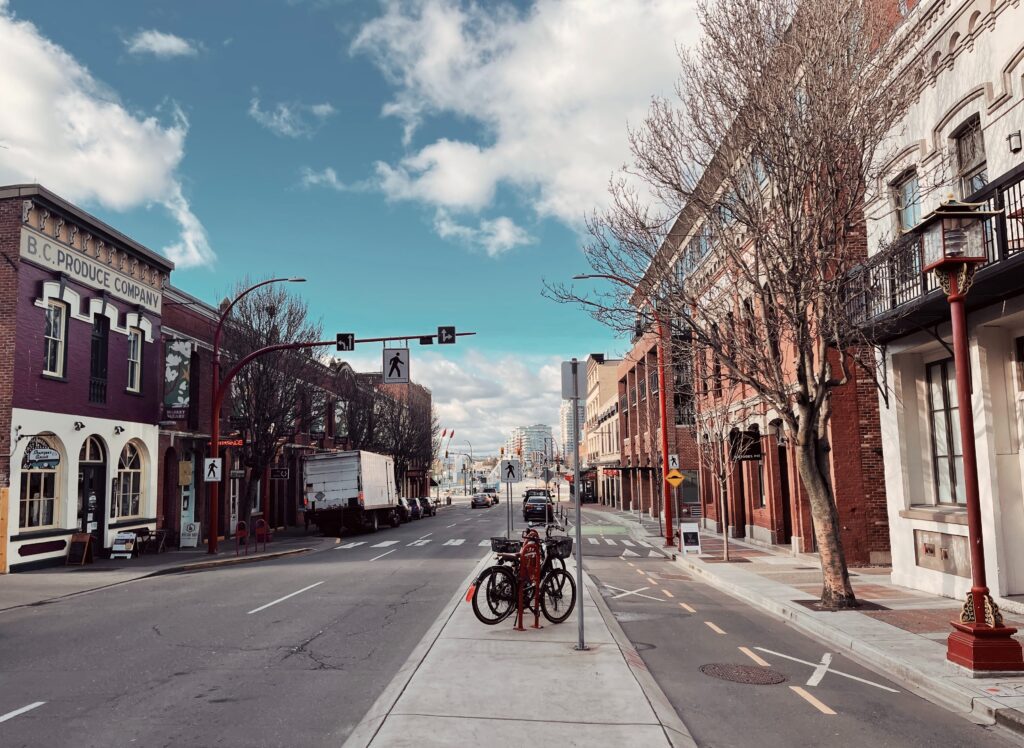 Photo by Sonya Romanovska on Unsplash

Victoria is the largest urban area located on Vancouver Island. It is well established as a global tourist destination. 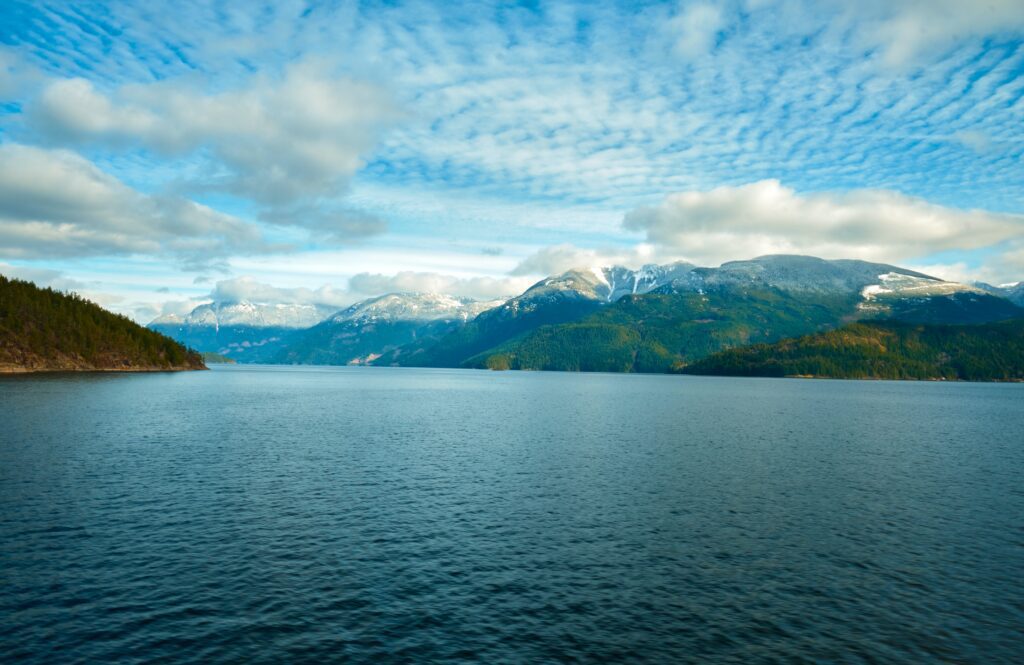 Photo by Lucas Mitchell on Unsplash

It is an authorized holiday, where people get a chance to celebrate their achievements and victories with their friends and families.

On this day, it is a day off, and most of the schools, offices and businesses remain closed. People mostly stay at their homes and spend some quality time with their families.

August is a summer season in Canada, so people sometimes add British Columbia day celebrations to their summer holiday trips.

A vast province like British Columbia is expected to have varied cultures and traditions. And it does have a variety in their culture and traditions.

The cultural history of British Columbia begins with the First Nations people who lived there for over ten thousand years. And as years passed, the culture and traditions started developing widely. 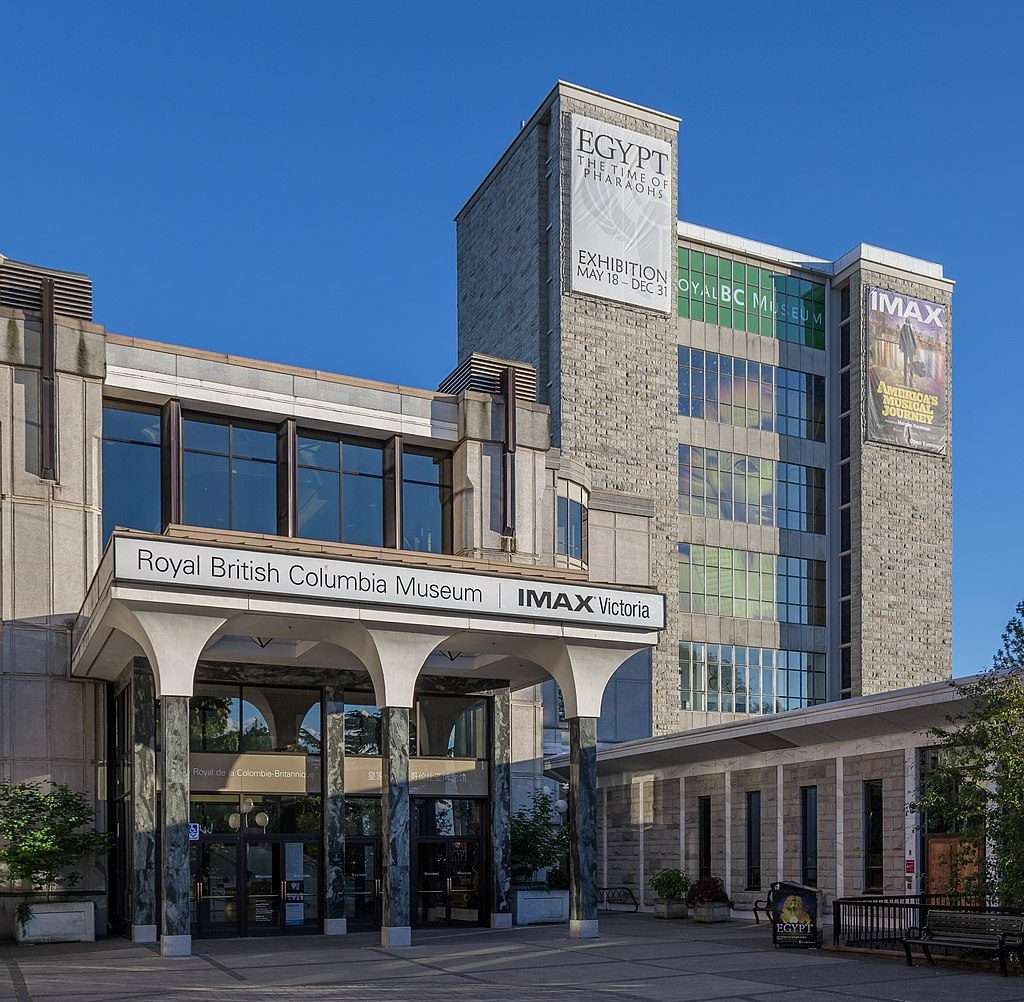 Their culture is a mix of Asian, First Nations, and European roots. Their Asian influence dates back to the time when Chinese immigrants settled in Canada.

Almost around 30-35% of British Columbia’s population has migrated from some other country and have brought along their customs and traditions. As a result of which, British Columbia stands as the most ethnically diverse province.

More than 200 distinct First Nations make British Columbia the most diverse province in Canada for indigenous people. Through cultural rallies, cultural centers, and studios, these people preserve their ancient cultures and provide better insights into them. 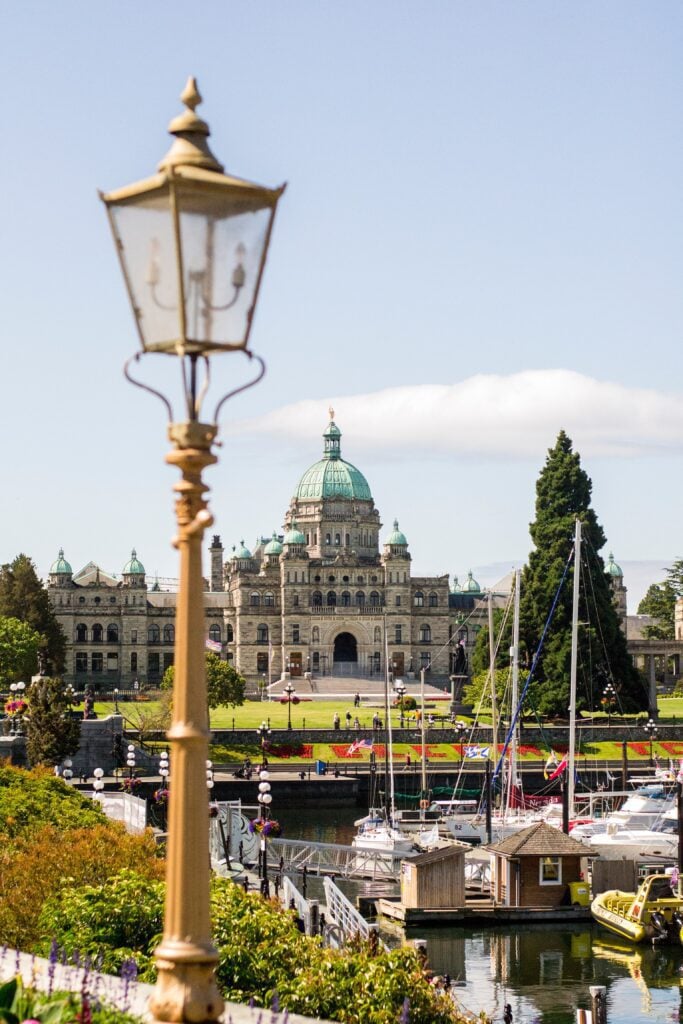 Photo by Reid Naaykens on Unsplash

The industry-first was set up in the year 1913. However, only in 1930, after 17 years of beginning, it had its first Hollywood shot.

One more thing to add to the list of interesting things about British Columbia’s film industry is that it is also commonly referred to as “Hollywood of the North.” And it is ranked as the third-largest film and television production center in North America. Also, BC is home to various talent agencies and video or film making companies.

Do you know some trendy films were filmed and produced in British Columbia? Most of you must have watched the movie “Diary of a Wimpy Kid,” right? This film was filmed in Vancouver. Another popular movie, Fifty Shades of Grey, was also filmed in Vancouver.

Adding further to the list of interesting things about British Columbia, next up is their Symbols.

The Coat of Arms of British Columbia is one of the most important symbols in the province’s heritage. The symbolic Coat of Arms represents the sovereignty, power, and authority of the province.

The First Coat of Arms was acquired in 1895, July 9, and was created by Canon Arthur Beanlands. 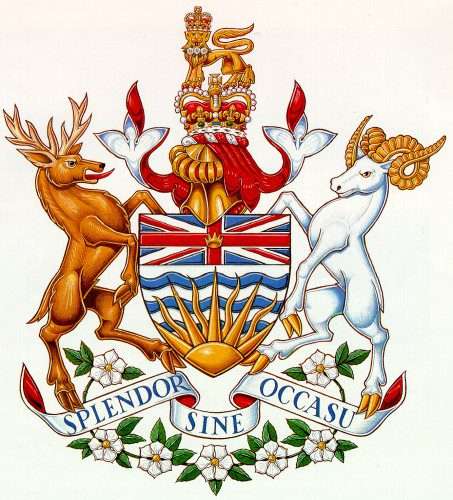 Arms- The Royal Union Flag with a crown in the center represents British colony origin. And below that, the three blue waves represent their connection with the Pacific Ocean. And the sun at the bottom signifies British Columbia as the westernmost province in Canada.

On both sides stand a wapiti stag and a bighorn sheep representing the colonies of British Columbia and Vancouver Island.

And at the bottom of all lies the motto- Splendor Sine Occasu, a Latin phrase which means Splendour without diminishment.

British Columbia’s Provincial Flag was adopted in the year 1960. It is an exact replica of BC’s Arms of the Province.

The setting sun on the flag symbolizes the fact of being the westernmost part of the British Empire. It is also said that the sun also represents its motto, which says, “splendor without setting.” 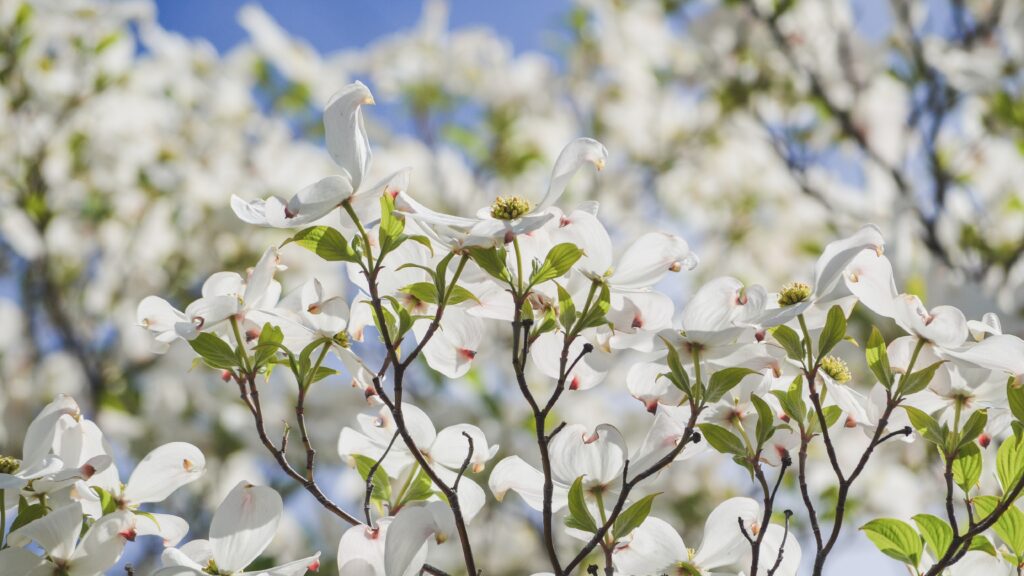 Photo by Debby Hudson on Unsplash

There is an interesting story behind the Pacific Dogwood being chosen as the official flower emblem. During World War II, selling dogwood lapel pins helped purchase wool and other comforters for the British Columbian soldiers.

After which, in 1956, Pacific Dogwood was adopted as the official flower of British Columbia.

British Columbia has a long list of official symbols, but not just the three mentioned above.

British Columbia is known for its pure natural beauty. And it is home to many amazingly beautiful National Parks. All these national parks are filled with gorgeous landscapes, rugged mountains, breathtaking waterfalls, dense forests, and beaches. 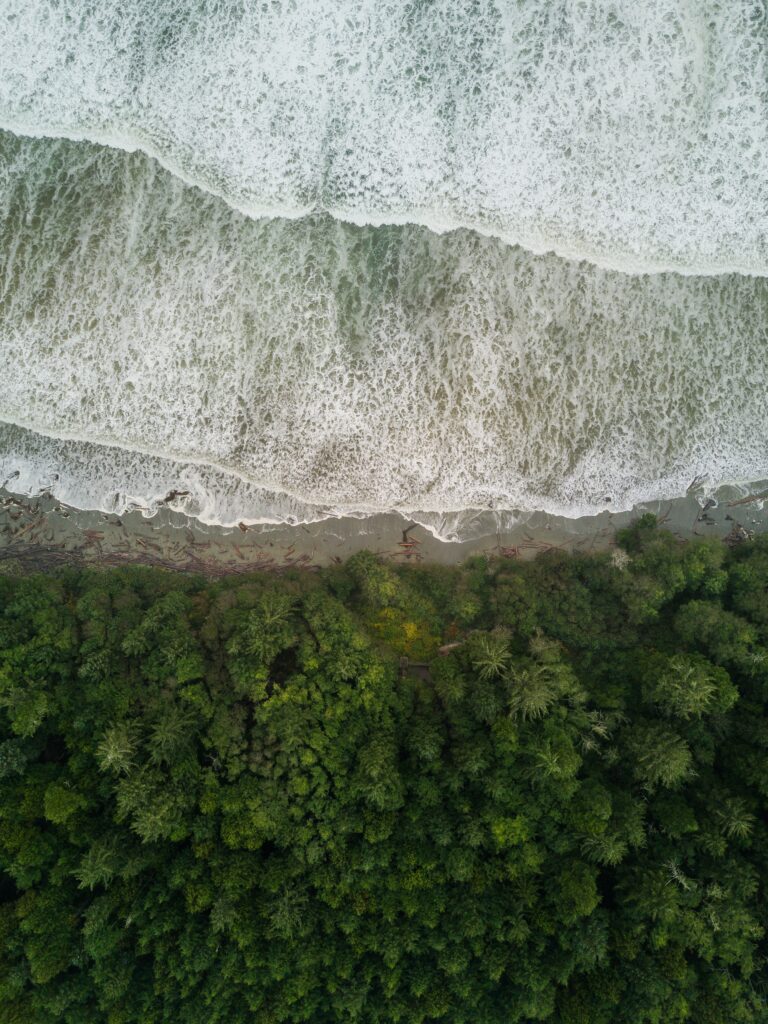 Photo by Lennart Heim on Unsplash

The Pacific Rim National Park is one such gorgeous national park, which is a real treat for the visitors. Pacific Rim offers the best of everything one could ask for. From old-growth temperate rainforests, beautiful long sandy stretches to various wildlife. You will find everything.

Interestingly the park comprises three unique units, the Broken Groups Islands, West Coast Trail, and Long Beach. All three units are unique in their own ways. They offer you various adventure activities such as kayaking, surfing, and beachcombing.

Another such amazing national park is the Gulf Islands National Park Reserve. This park offers you the best scenic views and adventure activities with the most relaxing scenery. 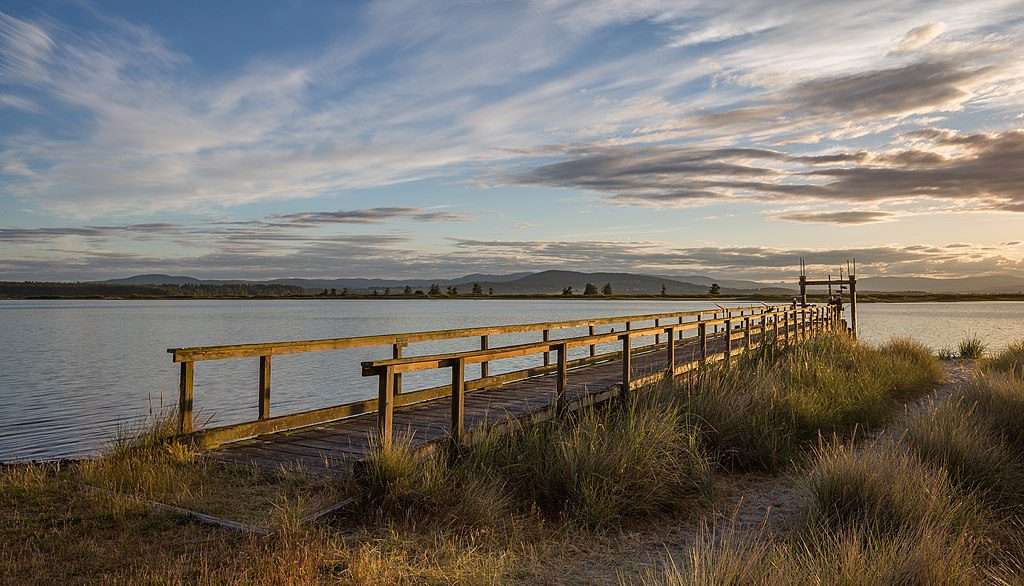 Visitors can enjoy various recreational activities in Gulf Islands National Park, such as fishing, kayaking, boating, diving, and camping. Camping is one activity which is loved by all adventure lovers.

Many other parks such as Yoho National Park, Gwaii Hans National Park Reserve, Kootenay National park are there that one should visit. There is no better place than these national parks to see the best of everything British Columbia has to offer.

Each Island offers you stunning views, refreshing aroma, and breathtaking scenery. And one of the biggest attractions of British Columbia is its beautiful islands. All of these islands have either beautiful beaches, dense forests, hot-springs, or mighty mountain ranges.

The journey to get to these islands is very exciting. You can either take a ferry or a flight or even better, ride on the seaplanes. Even when seaplanes are costly, the ride will do justice to your every penny.

Islands such as Vancouver Island, the second largest on the west coast, is a top-rated destination. It is known for its wildlife and beaches.

Photo by Mathijs Deerenberg on Unsplash

Vancouver Island offers you plenty of activities to enjoy, such as wildlife tracking, camping, fishing trips. It has been home to many indigenous people for many years, giving visitors the essence of their culture.

You can observe a variety of plant life, including the tallest Douglas Firs, Western red cedars, Garry oak, and Oregon grape.

Another beautiful island to visit is Meares Island, which features an exciting trial- the big tree trail. The major attractions are the trees on Meares Island and the Big Tree Trail.

Hiking the big tree trail takes you across some of the tallest trees in British Columbia. One highlight of Meares Island is the journey to it. Visitors can either reach the island on a boat or on a water taxi. Both the rides offer a fun experience.

There is another highlight to visiting Meares Island; it features the hanging garden tree. And the tree was once considered the tallest of its kind in entire Canada.

And to get a better insight into how to explore Baffin Island, please click here!

British Columbia is exactly the place you can instantly fall in love with. It has everything from beautiful cities like Vancouver, Victoria to massive mountain ranges, the gorgeous Islands, and picturesque towns. Here we have just listed the top 7 interesting things about British Columbia.

There are many more interesting things about British Columbia that you need to know and explore. Like exploring cultural spaces, jaw-dropping spots, provinces, and territories, having some unique food and drinks, or visiting unusual attractions.